dated 23 February 1912, is in the records of the Royal Mint,  and can be seen in The National Archives (TNA) at Kew. London.

There is a hand written note on the document that states:

Life would have been so much easier for collectors had they not ‘returned' those lists.

Distribution of the medal was to be much less than in 1903. The exact distribution can be seen in the documents quoted below.

These records of the Royal Mint and the Scottish Office in Whitehall can be found at The National Archives at Kew. 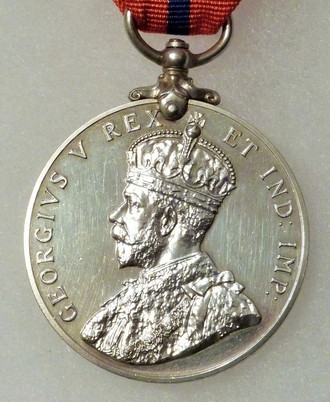 Who was entitled to be awarded the medal

The list of conditions were approved by His Majesty the King and contain the following. 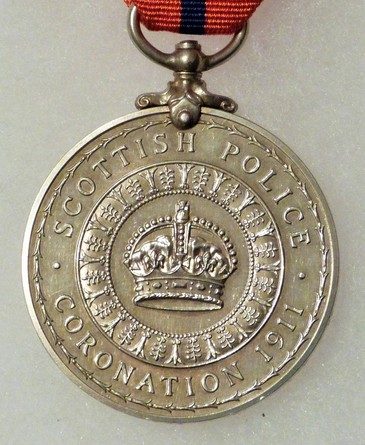 The correspondence at the Scottish office includes the following.

According to ‘The Scotsman’ newspaper edition of Friday 13 September 1912,

This explains the 387 names on the list of Glasgow officers that appeared in the Police Review & Parade Gossip edition of 11 October 1912.

Despite what some reference books state as 'fact', the records of the Royal Mint prove that no more than 1,786 Scottish Police Coronation medals were struck and only 1,465 of those were awarded to Police Officers, the bulk of whom served in Edinburgh City Police and the City of Glasgow Police.

310 went to the St Andrew's Ambulance Association on duty in Edinburgh and Glasgow and 11 went to the Park Keepers at Holyrood Park, Edinburgh.

An interesting letter from the Scottish Office dated 15 July 1912 concerns a request to the Royal Mint for a medal to be re-engraved.

Due to a transcription error, Inspector James Alexander of Forres Police Station had his medal engraved "Inspector J.A Forres".

The cost of re-engraving was to be included in the account to be rendered.

In a letter dated 22 July 1912 from the Burgh Police Office, Paisley, the Chief Constable William Duncan complained that "the swivel of his medal had broken off at the first time of wearing" and requested that it be repaired.

It was a very quick turnaround because in a letter from Paisley Burgh Police Office dated 26 July 1912, the Chief Constable writes to the Master of the Royal Mint to thank him for the return of his medal.

The Total Bill for the 1,465 Scottish Police Medals

In a letter from the Chief Clerk of the Royal Mint on behalf of the Master of the Royal Mint to the Scottish Office dated 9th August 1912, he requests that a cheque for the amount due, two hundred and eighty three pounds, eight shillings and three pence be sent in due course.

What did your last 1911 Scottish Police medal cost?

The vexed question of which officers were awarded the King George V Coronation (Scottish Police) Medal is a continuing puzzle that several people have tried to solve including Tony Wilkinson, Steve Grainger and the late John Green. I have been assisted in this task by them all and I am grateful to them for all their help and advice.

I had access to the 'Police Review and Parade Gossip' newspapers for the years 1911 and 1912. I searched for and recorded every entry concerning the issue of the medal to Scottish Police forces and the table below is the result.

I used the formula in the Scottish Office correspondence to calculate the numbers for each force.  The officers who were on duty at a Royal Event during the visit between 17 and 21 July 1911 were entitled to a medal.

The next category were those who were awarded a medal using the numbers in the force to calculate an allocation, the minimum for a force under forty men was two medals. The comparison between the projected allocation and the actual medals listed as awarded in the Police Review and Parade Gossip is the same in many cases.

I can find no listing in the paper for any medals awarded to the forces of Kinross-shire, Dunbartonshire or Wigtownshire. It would be highly unusual for them to be missed out

Kinross-shire, although operating as a separate force, was administered by the Chief Constable of Fife and Kinross, James Tennant Gordon, until May 1930, so the fact that Fife seemed to get more than they were due might be because the Kinross medals were allocated via there. C.C. Gordon's KPM is inscribed to "Jas. T. Gordon Ch. Const. Fife & Kinross Constab."

In arriving at the medal totals for each force, I have used the figures in Royal Mint receipts that list the named forces and the numbers engraved to each. For the rest, I have taken the figures from the published lists in the Police Review and Parade Gossip which are in no sense, complete. In fact, PC John Cape of City of Glasgow Police is listed as 'PC John Cope'. PC Robert Denovan of Partick Burgh Police is listed as 'PC Robert Donavan'. It is likely that there are many more discrepancies.

I only recently became aware of the medal issued to the Secretary of the High Constables of Holyrood. I am sure there are other facts regarding these medals still to be discovered. This example is an exceptionally rare medal since the High Constables of Edinburgh who had requested to be included in the issue (see above, 9 November 1911), were quite specifically excluded in the regulations.

I often see it written that if a 1911 medal is not on a list it must be an Edinburgh medal. That is just not the case. Look at the Medal Roll below and you will see there are still names from Mid Lothian and other forces missing.

The list of forces below is a first effort at making sense of the allocation. I do not claim in any way that it is 100% accurate, it is a best guess based on contemporary sources.

It is my long-term aim to publish an accurate Medal Roll for the medal on this website. For the present, the Medal Roll below is the best I can do.

I have been tremendously assisted in the compilation of this Roll by the efforts of Tony Wilkinson and for that, I am eternally grateful.

Any information on King George V Coronation (Scottish Police) Medals that you can give me will be appreciated and acknowledged. It will certainly assist me to complete a more accurate Roll.

Please feel free to contact me on enquiries@scottishpolicemedals.co.uk to correct any errors or to contribute new information.

This Medal Roll was compiled using the names listed in issues of the Police Review and Parade Gossip throughout 1912. I also used Divisional photographs of Edinburgh City Police to identify those officers wearing the medal.

I was greatly assisted by the research carried out over the years by Tony Wilkinson and who very kindly, let me use his work.

The Medal Roll is incomplete. Almost 400 Edinburgh City Police officers are missing as are many from Mid Lothian and West Lothian. There are no names at all from Kinross-shire or or Wigtownshire and only one, Chief Constable Angus Cameron from Dunbartonshire..

If you have any un-identified Scottish 1903 and 1911 medals, please get in touch and I will try to identify them for the Roll.