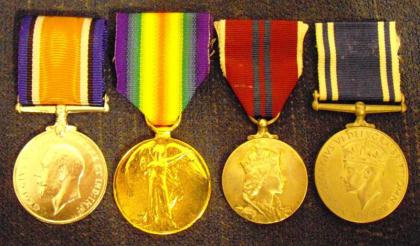 George John Argo was born at Newmacher in the County of Aberdeen on 19 September 1895. He was the son of a Publican and his wife.

He served in the Gordon Highlanders as Private S/15948 from5 November 1915 to 22 January 1919 and his Medal Index Card (MIC) confirms his entitlement to the British War Medal and Victory Medal.

He joined Aberdeenshire Constabulary as a Probationary Constable on 10 February 1919 at Cults Police station, just outside the City of Aberdeen, shortly after leaving the Army.

He served at the Police Stations shown below:

He was awarded the Coronation Medal on 2 June 1953.

The documentary evidence for both exists.

Superintendent Argo is entitled to the BWM and VM but his medals are missing, (the BWM and VM above are copies for illustration only). Please look at the Medals Wanted section for further details. Thank you.