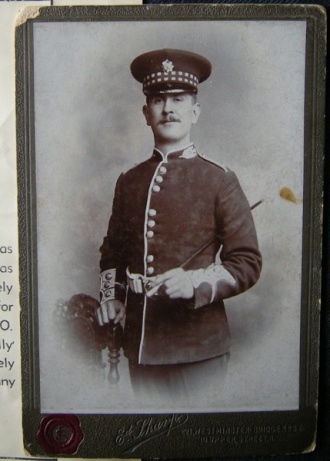 William John Ross was born on 10 September 1891 at Ord in the Parish of Rosskeen in the County of Ross. His father was Donald Ross, a Farm servant and his mother, Jemima Munro or Ross were married at Fearn in Ross on 12 December 1884.

By 1911, William John Ross, (18) was working as a Railway Clerk and living as a Boarder at 8 Commerce Street in Elgin Burgh.

William John Ross enlisted in the Scots Guards at Glasgow in October 1914. The following extracts from articles in the ‘Ross-shire Journal’ of 15 November 1915 and October 1918 shed some light on this remarkable young man.

Extract from the Ross-shire Journal (15 November 1915)

He enlisted in October, 1914, and went to France in April.

Previous to enlisting he was a police constable at Kilwinning, Ayrshire. He is 24 years of age, and was educated at Maryburgh Public School” (in Dingwall).

Extract from the Ross-shire Journal (November 1918)

Deceased was out with his company on patrol when he was hit by machine gun fire and instantly killed. Sergt. Ross joined the famous 1st Guards in October, 1914, and went to France in April following. He was wounded at the battle of Loos in 1915, and rejoined on recovering, since then he has seen much fighting.

He was awarded the D.C.M. for conspicuous gallantry in the field under the following circumstances, as related in the London Gazette a fortnight ago:

"For exceptional gallantry and resource. When the difficulties of an attack were greatly increased by intense fog, gas shells, and counter-barrage, this N.C.O., acting as Company-Sergt.-Major, rendered the greatest service to his officers by the wonderful example and untiring energy which he displayed, and which had the most inspiring effect on the men of his company."

Twenty-seven years of age, he was a fine type of Scots Guardsman. Educated at Maryburgh School, he was a police constable at Kilwinning, Ayrshire when he joined up. Deep sympathy is felt with the family in their bereavement.”

“In a letter addressed to Miss Ross, deceased's sister, the Rev. Innes Logan, the well-known chaplain of the 1st Scots Guards, says:

"I fear I have very sad news for you concerning your brother, Sergt Ross, D.C.M. On 15 October, while out with his company on patrol, he was hit by a machine gun bullet. I greatly regret to say he was instantly killed.

I laid him to rest in the presence of his commanding officer, while the pipers played a lament yesterday (22nd October) at 3.30. He was one of the finest men in the battalion, and he will be greatly missed.

We honour his memory, and his comrades beg me to say how deeply they feel for you in this great sorrow. We pray that as time passes you may find some consolation in the thought that he died fighting gallantly for a noble purpose. Sergt, Ross was Acting Sergt-Major at the time."

A copy of the funeral service of the Guards accompanied the Chaplain's letter.” 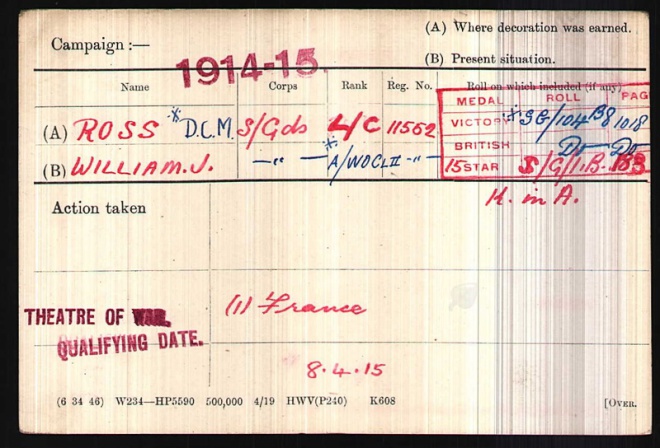 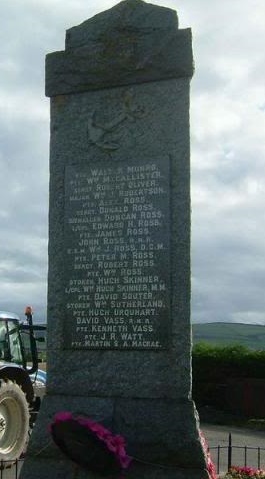 He is also commemorated on the village War Memorial in Fearn in Ross-shire. 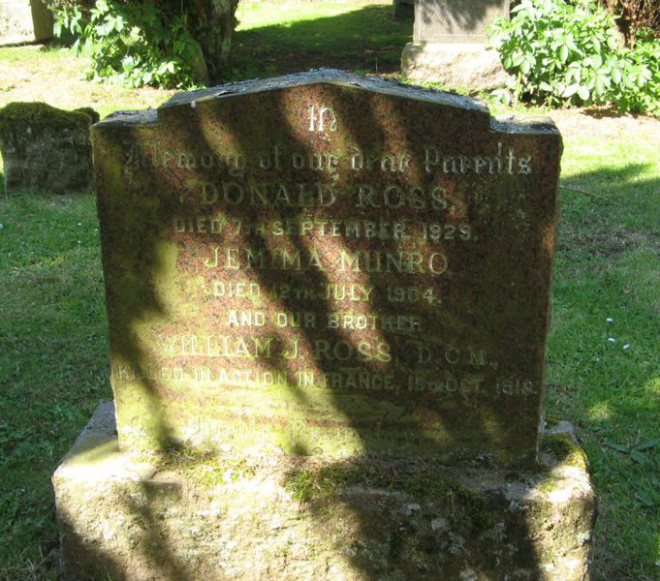 On the Ross family gravestone of his father and mother in Fearn Abbey Graveyard, the inscription reads:

William John Ross was clearly a man of considerable character and bravery who gave his life for his country.

This article has been possible due to the assistance of the present custodian of William John Ross’ medals, Max Espie. Thanks Max.