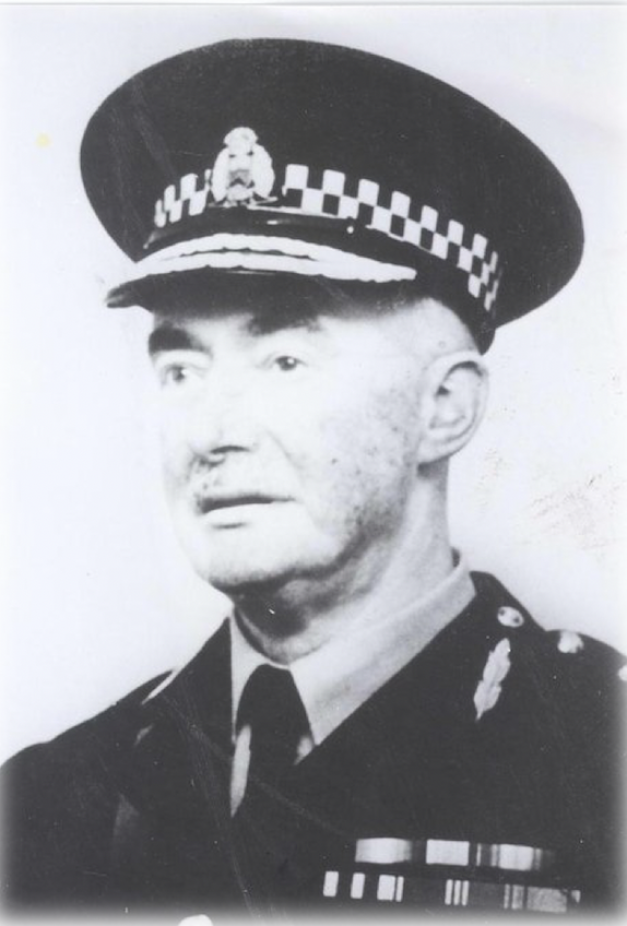 James Turner was born on the 15 October 1882 in Drumgelloch, Clarkston in Airdrie. His father was employed as an engine keeper. There were 10 children in the family.

The family then lived at 26 Commonside Street in Airdrie but later moved back to the Clarkston area, to 139 Forrest Street.

He became a coal miner at 12 and spent almost 10 years in the pits. His father and three of his brothers also worked as coal miners.

He broke a leg whilst working at a pit in Bannockburn and was off work for 5 months. He returned to work but had another accident when an explosion almost cost him his eyesight. He was temporarily blinded and had to attend the Glasgow Eye Infirmary every day for 6 weeks.

Whilst convalescing he saw no future working in the mines and thought there was a better way to earn a living. On the advice of his father he applied for a position with Airdrie Burgh Police. His father’s advice was –

“You are tall enough, you have big enough feet and you are quite stupid enough, so why not join the police”.

In October 1905, fourteen days after his application was made, he was accepted into the Police and became Police Constable, collar No 12. He was still recovering from injuries received in the mining accident.

He was a good police officer and thoroughly enjoyed his new career, quickly becoming a well- recognised face around the town.

On the 10 November 1911 he married Mary McLeaver, a Domestic Servant, who lived in the Dunrobin area of Airdrie. They established a home in Bore Road, Airdrie, residing at No 3 initially and around 1915 to the house at No 1. They eventually had 7 daughters. Unfortunately, one of his daughters, Catherine, died at the age of 3, of Scarlet Fever.

James had a drive to educate himself and attended classes at the Higher-Grade School in Airdrie and studied physics and mathematics, gaining qualifications in both subjects. He completed a 2-year course in only 12 months. He also studied Pitmans shorthand and gained the theory certificate. He later taught mathematics to other serving officers.

Another great interest was First Aid. He trained with the St. Andrews Ambulance Association gaining numerous qualifications. By May 1909 he had gained all necessary certificates at three levels and a St. Andrew’s Ambulance medallion. 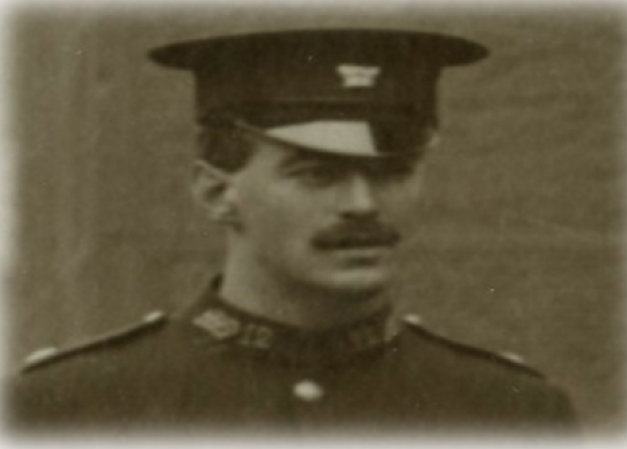 On the 12 February 1915, at the age of 31 years and 4 months, James Turner was attested at Kettering. He initially joined the Scottish Horse and was then attached to the Essex Regiment Field Ambulance.

He saw action in Gallipoli, Egypt and Palestine at which time the regiment was attached to the Imperial Camel Corp. Whilst there he met Captain Thomas Edward Lawrence, later known as Lawrence of Arabia, for his exploits in the Arab Revolt and the Sinai and Palestine Campaign in the First World War. James was awarded the 1915 Star, the British War Medal and the Victory Medal.

At the end of hostilities, he was discharged from the services and returned to policing in Airdrie taking up the position of Bar and Court Officer.

His skills and attributes were quickly recognised and in October 1919, he was promoted to the rank of Sergeant. His duties included Bar Officer at the Burgh Court and the Headquarters Clerk, responsible to the Chief Constable.

He excelled in his supervisory role and he sat his police examinations consisting of educational tests of efficiency, which at that time were administered by the Scottish Education Department and Scottish Police Board.

He successfully passed these examinations in December 1923.

In September 1924, Senior Inspector James Kellock retired from the force and on 6 October that year, Mr. Turner was promoted to Junior Inspector at Headquarters.

The construction of better social housing was well under way in Airdrie Burgh at this time and Inspector Turner was allocated one of the new houses at 3 Woodburn Avenue in the Cairnhill area of Airdrie. He remained in this house until his retiral from the police.

The rank structure in smaller forces was extremely limited in those days. The Inspector role being the rank below the Chief Constable. The Burgh had two Inspectors, one senior and one junior.

Mr. Turner became senior Inspector around 1930, which also meant that he was Deputy Chief Constable.

In May 1933 the existing Chief Constable, Captain Alexander Wesley Christie retired from the police after 44 years of service. The Burgh Council made the unusual step of appointing a local officer that had served through the ranks of the force as the new Chief Constable. That man was James Turner.

He was initially reluctant to take the position however he agreed and served for 18 years in the role.

In 1937 he was awarded a medal for the Coronation of King George VI.

During his time as Chief Constable, Mr. Turner was responsible for many improvements in the policing of the Burgh. He was responsible for introducing the police pillar system, a series of telephones located at the outlying areas of the Burgh. These allowed the public and officers alike easy contact with the Headquarters office in the town. He also introduced patrol cars, wireless systems in the cars and the teleprinter system. 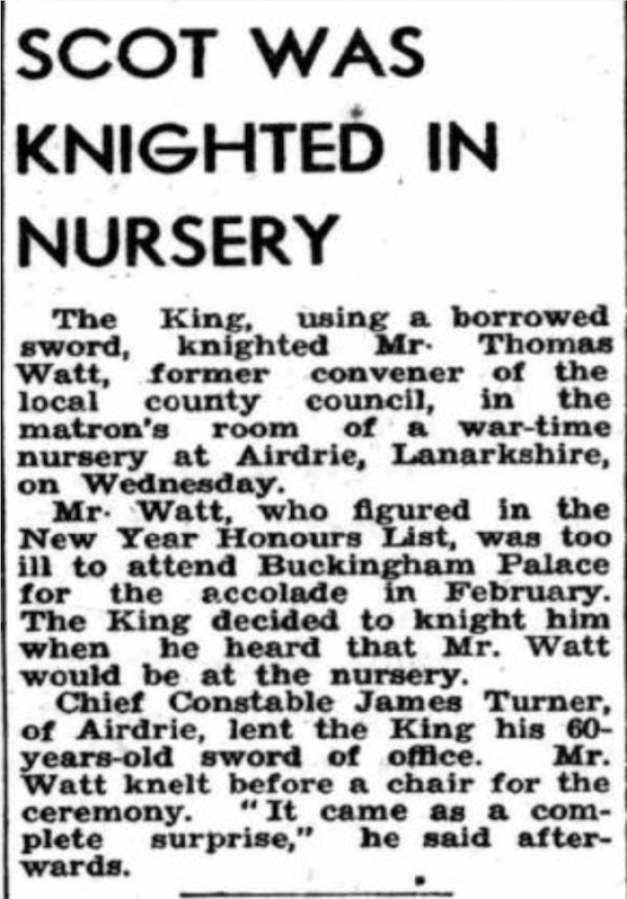 During WW2 he was responsible for Civil Defence and increasing the Special Constabulary within the Burgh.

In 1943 King George VI visited Airdrie and the Imperial Tube works, which was producing much needed armaments. Unlike today this was a surprise visit with the local population only being told that day by means of leaflet drops, vehicles with loudspeakers and notices in shop windows!

During the visit, the King attended a children’s nursery where he also Knighted a local man, Mr. Thomas Watt. Mr. Watt had been too ill to attend the investiture at Buckingham Palace. The King decided that the Knighthood would take place there and then. However, he did not have a sword with him.

He turned to Chief Constable Turner, who was wearing his ceremonial sword, and asked to borrow it. The sword was duly handed over and Mr. Watt Knighted.

Mr. Turner was always a policeman first and foremost. In September 1945 he and Mrs. Turner were travelling on a bus between Glasgow and Airdrie. A drunk male boarded the bus in Glasgow and shortly thereafter began to sing and basically annoy everyone. Unfortunately for him, he sat next to Mrs. Turner and eventually his language became quite abusive and very loud. Mr. Turner intervened, asking the male to be quiet, however the male resented this and lashed out, punching Mr. Turner on the face.

The Chief then sprang into action and took hold of the male, escorting him down the stairs of the bus. On the way down the male lashed out, kicking the Chief Constable on the chest and legs. The driver was instructed to attend the police station where the male quickly realized that he had decided to take on the local Chief Constable.

He appeared at Airdrie Sheriff Court and pled guilty to a Breach of the Peace and Assault. He was sentenced to sixty days imprisonment. No doubt additional trouble awaited as he was a soldier on 48 hours leave!

At the conclusion of the war Mr. Turner was awarded the Defence medal for his police service during the conflict. 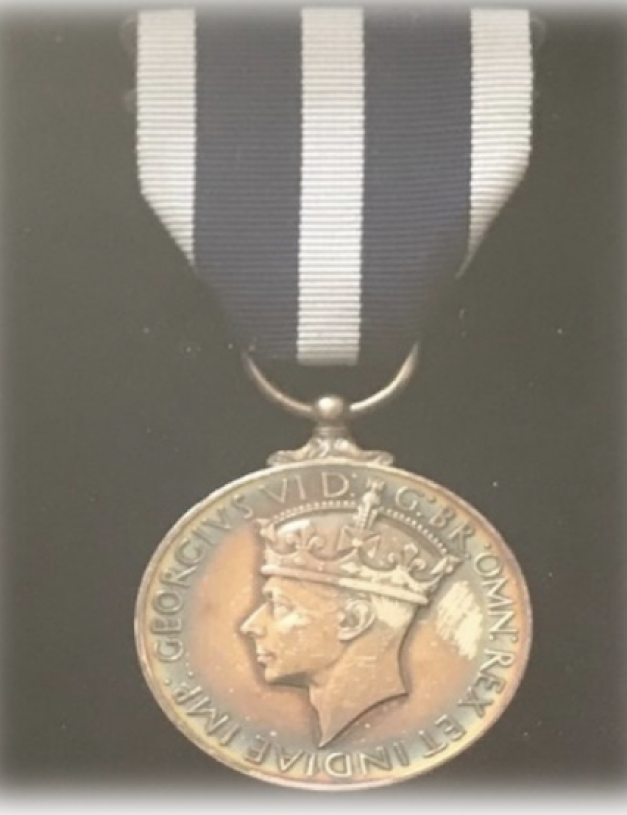 In recognition of his police service Chief Constable Turner was awarded the Kings Police Medal on 13 June 1946. He received his medal at a ceremony held in Dalzell House, Motherwell. The medal presented by Lord Hamilton, Lord Lieutenant of the County of Lanark, stating

“His police service has been marked by steady and intense devotion to duty and as Chief Constable he has proved himself to be an able and reliable administrator”. 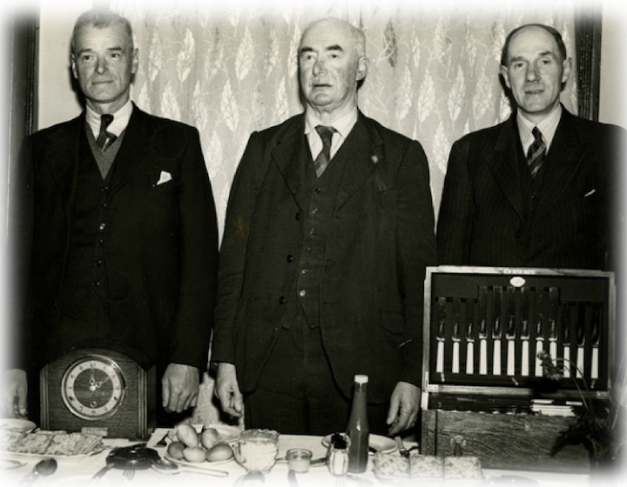 Chief Constable Turner with some of his retirement gifts.

Mr. Turner led the force for a further 5 years following the award of the Kings Police Medal, seeing a reduction in crime and increase in establishment of the force. He retired as Chief Constable on 16 April 1951 having completed 46 years police service.

At his retirement presentation he was spoken of in exceedingly high terms indeed by local officials and colleagues alike. It was clear that he was a much loved and respected man in Airdrie Burgh and beyond.

“We shall be sorry to lose the services of Chief Constable Turner. He carried out his duties in a diplomatic manner. I think he was able to curb the adventurous spirit of a number of our wayward citizens and thus hampered criminal development.

Everybody in Airdrie knows Jimmy Turner, not only as an efficient policeman but also a man, tolerant and understanding, to whom they could go for help and advice in times of trouble”.

For many years he was the Secretary and Treasurer of the local St. Andrews Ambulance Association and involved himself with the Airdrie Burgh Police Mutual Improvement Association.

Sadly, Mr. Turner and his wife Mary did not get awfully long out of his retirement. She died on 23 April 1951, only a week after he officially retired. She was 65 years of age and had been unwell for some time.

On 21 April 1951, only two days before her death, in the house at Woodburn Avenue, a grocer’s van swerved to avoid colliding with another vehicle, crashing through the garden of Mr. Turners house and coming to rest inches from the front window. Two young men were injured as a result.

Mr. Turner continued a close association with the Burgh force in his retirement. Attending many functions including bowling and social events.

James Turner died at his daughters’ home in Perthshire in 1972 at 90 years of age.

This article is here by the kind permission of George Barnsley of the Lanarkshire Police Historical Society. You can see the full range of material on Lanarkshire Police forces by clicking on this link http://www.lphs.org.uk/the-society/