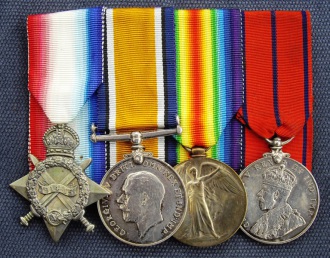 Patrick Park was born in Dalry in the County of Ayr in 1882. He joined the City of Glasgow Police on 3 November 1903 and was posted to ‘B’ or Western Division.

In the intervening years, he married Elizabeth Mitchell and they had a daughter.

According to ‘The Police Review & Parade Gossip’ of 11 October 1912, Patrick Park was one of the 1465 officers in Scotland awarded the King George V Coronation (Scottish Police) Medal 1911 in that year.

On 23 September 1914, he resigned from the City of Glasgow Police and enlisted in the Scots Guards as Guardsman 11288. The Resignations Register records his reason for leaving as “Joined the Army”.

On 1 October 1916, he and many other civilian police officers in the Army were temporarily transferred to the Military Foot Police (MFP). He then served for four years in France. His MFP Number was P/6055.

His MIC confirms his entitlement to the 1915 Star, the British war Medal and the Victory Medal, all of which are correctly impressed with his Scots Guards details. His medals can be seen in the photograph above and throughout the website.

Patrick Park was demobbed in July 1919 and “Re-appointed to the force on his discharge from the army and posted to ‘B’ Division on 15 July 1919”.

He was promoted to Sergeant and transferred to ‘K’ or GovanDivision in 1922.

Patrick Park retired on pension on 23 December 1933 and moved back to Ayrshire.