The King's Police Medal for Gallantry

The first four men listed on this page are the only four Edinburgh City Police officers ever to be awarded the King's Police Medal for Gallantry. They are:

The stories can be read below. 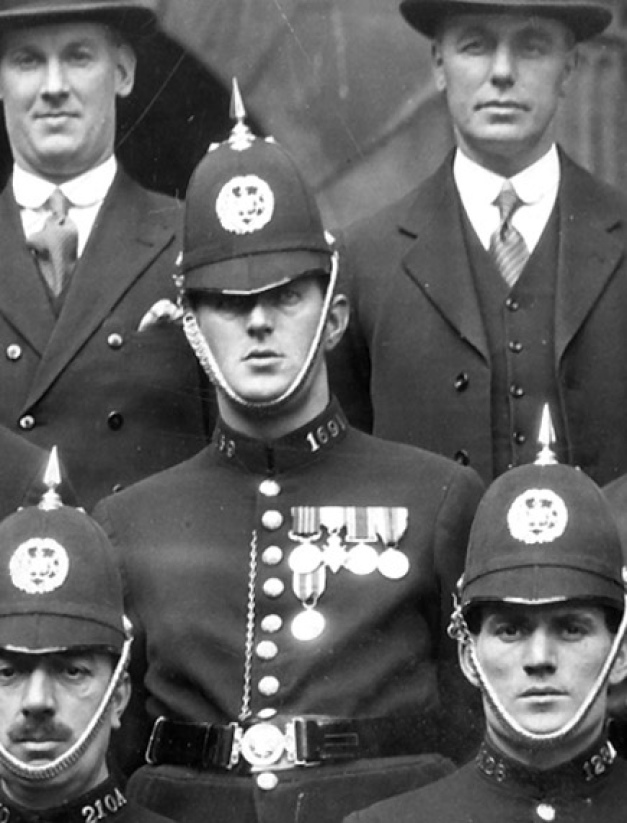 William Weighland Ramsay was born on 16 April 1891 in Newbattle in the County of Midlothian.

With the consent of the Chief Constable, he resigned to join the Army on 30 June 1915.According to his personnel record, he resumed duty on 6 February 1919 having served as a Corporal in the Gordon Highlanders and awarded the Military Medal. There are two ‘possible’ men; 10951 Corporal William Ramsay, 8/10thBattalion or 17383 Private William Ramsay.

His Edinburgh City Police personnel records that on 2 November 1920, he was “Transferred from Leith Burgh Police with 8 years and 116 days Police and Army Service counting towards pension.”

On 14 April 1924, his record records that he was “Awarded £2 for rescuing a man from drowning in Leith Docks.”

It seems that he was also recommended for further recognition as in the New Years’ Honours List for 1925, under the list of names of those awarded the King’s Police Medal for Gallantry was ‘William Weighland Ramsay, Constable (655 E), Edinburgh City Police’.

‘The Scotsman’ of Friday, February 13th, 1925 records that on the previous day at Buckingham Palace, King George V bestowed various honours. Among those present was PC William Weighland Ramsay. His citation was as follows:

“A man threw himself into Leith Harbour, whereupon the constable, taking off his greatcoat, tunic and boots, plunged into the water, and after swimming 25 yards, caught hold of him, and with the help of a lifebuoy which had been thrown to him, succeeded in bringing the man to the quay. The water was 12 feet deep and a strong ebb tide was flowing.” 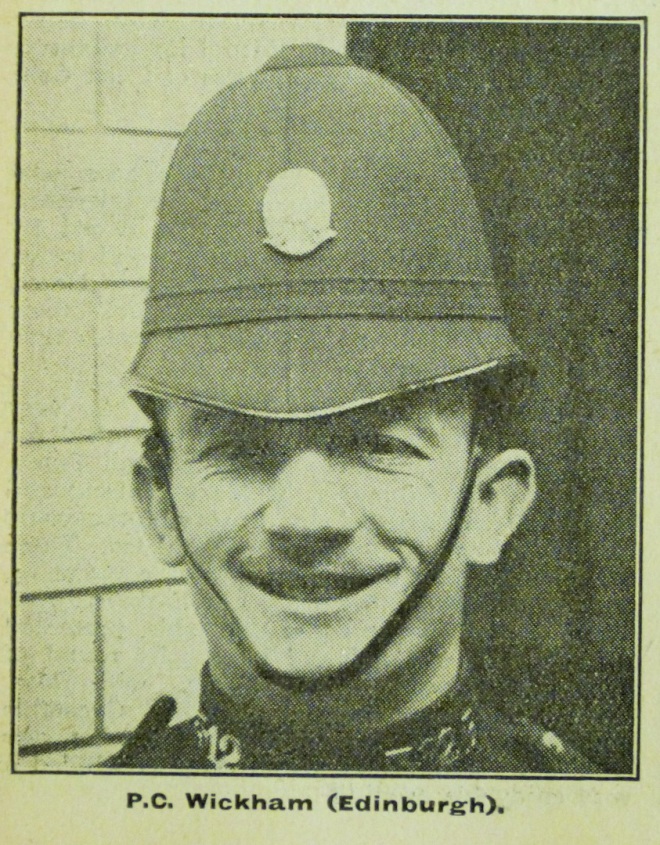 The King’s Police Medal for Gallantry (1934)

Charles Spence Wickham was born in Gorebridge in Midlothian on 27 February, 1911.

When he joined Edinburgh City Police on 10 February 1931 (just before his 20th birthday), he was about 5’ 10” with hazel eyes, brown hair and a fresh complexion. He was PC 312 B at Gayfield Square Police Station.

According to the Edinburgh City Police Weekly Records, “On 16 May, 1933,” (he was) “Highly Commended for promptitude and courage displayed in stopping a runaway horse.”

The circumstances are described below.

The Police Review and Parade Gossip of 2 February 1934 records the following on page 79:

According to the Weekly Records, on 1 October, 1935, PC Charles Wickham KPM was again “Highly commended for alertness and resourcefulness displayed in effecting the arrest of a motor car thief.”

According to his Personnel Record, Charles Wickham “Resigned for service in H M Forces on 14 December, 1939.”

However, in February 1940 and 1941, he is shown as receiving two pay increments.

The final entry on his Personnel Record states “27.8.45 Resigned from Police Force.”

I believe that Charles Spence Wickham KPM died aged 75 in Bathgate in 1987.

If you are able to help with an original image of PC Wickham’s medal, please get in touch with the website. Thank you. 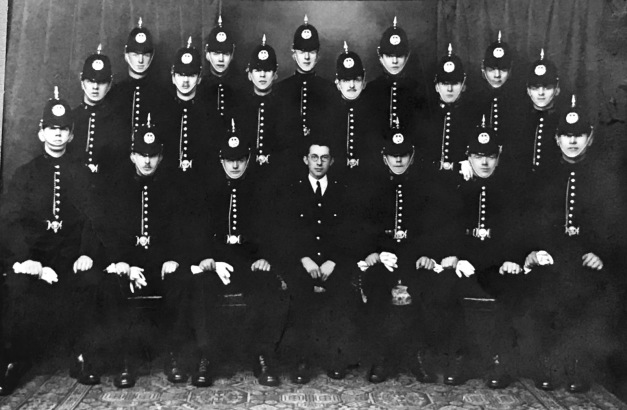 George Watt KPM is the man 2nd from the right in the middle row. This picture may have been taken in the Hall in Cranston Street at the junction with the Canongate which was then used as a local Training Centre.

This picture was taken after the General Inspection of the last intake of recruits prior to the introduction of the Police Box System in May 1933. 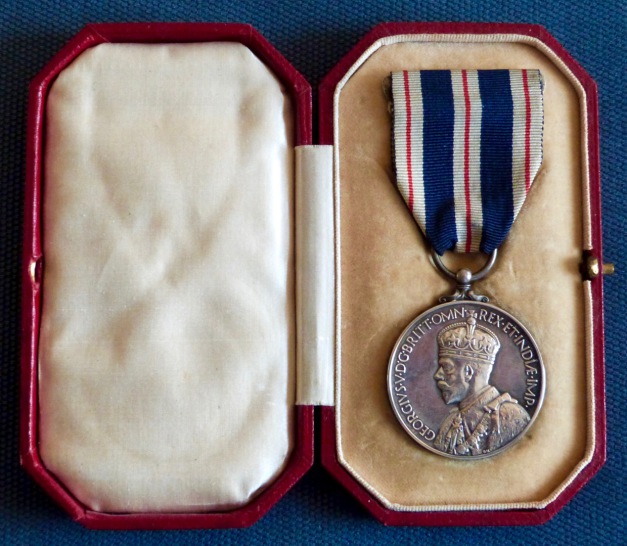 KPM for Gallantry awarded to George Taylor Watt in 1934. It is identical to that also awarded to PC Charles Wickham, also of Edinburgh City Police. 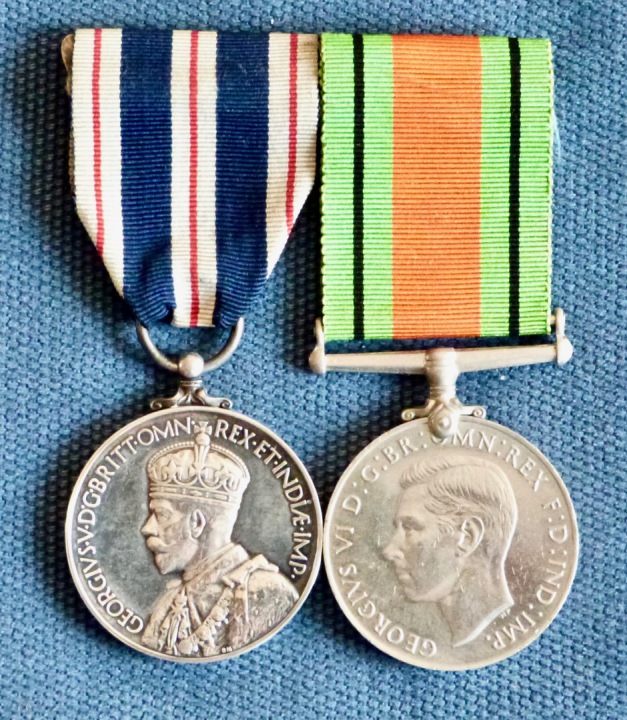 George Watt's KPM with the Defence Medal to which he was also entitled for his service during World War 2.

The naming on the rim of George Watt's KPM. The Defence Medal was issued un-named. 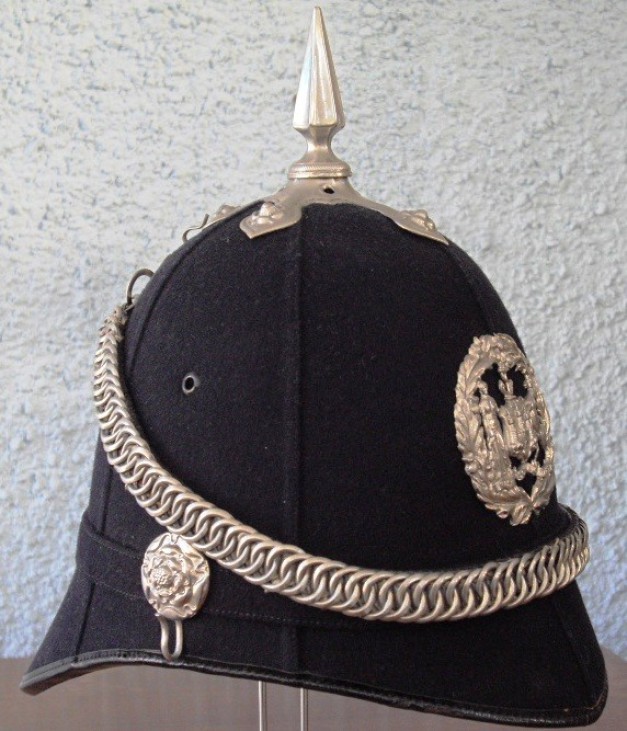 Edinburgh City Police Ceremonial Helmet of the style worn by the recruit constables in the picture. 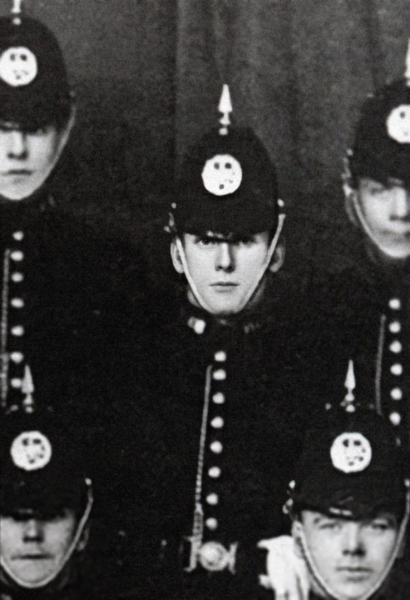 PC George Watt KPM is the man in the middle. Please get in touch if you have a better quality image. Thank you. 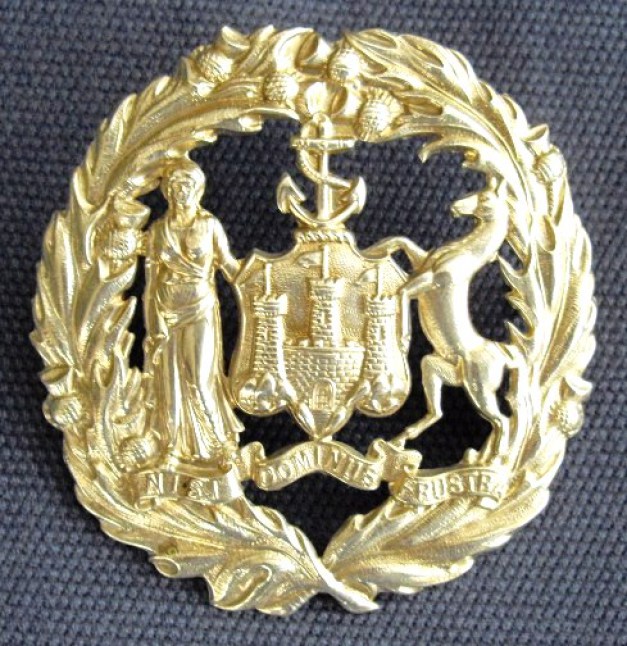 George Taylor Watt was born in Edinburgh on 4 May 1911.

He was a Warehouseman before he joined Edinburgh City Police on 27 December 1932. He was posted to Leith just before the introduction of Police Boxes and when it was still “E’ Division, with the collar number PC 708 E.

In 1933, after the introduction of Police Boxes, the five territorial divisions were reorganised. ‘A’ Division took in the whole of the Southside of the city. ‘B’ Division at Gayfield continued to cover the North side of the town but now included the area to the north of Queensferry Road as far out as Cramond. The West End Police Station at Torphichen Place, formerly ‘D’ Division became ‘C’ Division and took in the area of the city out to its Western boundaries. Leith and Portobello became ‘D’ Division. ‘E’ Division became the Traffic Department incorporating the Mounted Police Section. At this point, PC Watt became PC 576 D.

Under the heading “LEITH BATHING TRAGEDY – Policeman’s Plucky Rescue Effort”, the following appeared in the edition of the Scotsman newspaper of Thursday 6 July 1933.

While bathing near the slipway at the north-east corner of the Edinburgh Dock, Leith, yesterday, an apprentice ironworker, John Carse, was drowned. He was 21 years of age, and resided at 22 East Hermitage Place, Leith.

Carse had gone into the water to bathe during his dinner-hour and got into difficulties. His plight was noticed by Constable George Watt, who, without divesting himself of any of his clothing, at once plunged into the water in an effort to rescue Carse. He succeeded in getting hold of the drowning man,  who was struggling, and both disappeared under water twice. Ultimately the Constable had to release his old of the young man, and himself had to be assisted out of the water and taken to Leith Hospital for treatment.

The body of Carse was recovered some hours later.”

The following appeared in the edition of the Scotsman newspaper of Saturday 19 August 1933 under the heading “ROYAL HUMANE SOCIETY – Scottish Awards”,

PC George Watt of Leith, on 5thJuly, attempted to save John T. Carse (21), an apprentice ironworker, of 22 East Hermitage Place, Leith. Carse got into difficulties in the water, and PC Watt plunged in fully clothed, and succeeded in reaching Carse, who was however, later wrested from his grasp by force of the current. Watt was drawn ashore in a semi-conscious condition.”

The Citation read at Buckingham Palace, London on 27 February 1934

The following is the citation read at the presentation of his King’s Police Medal for Gallantry presented by King George V at Buckingham Palace on 27 February 1934. The citation describes George Watt’s bravery on 5 July 1933 when he attempted to rescue a man from drowning in Edinburgh Dock, Leith on 5 July 1933:

On 5thJuly 1933, a youth who was bathing in the sea near the Edinburgh Dock at Leith got into difficulties and shouted for assistance. A spectator took off his clothes and plunged into the water but almost at once, was caught by the tide which was running very strongly and was forced against some projecting ironwork on the slipway where he was held until helped from the water.

Constable Watt hearing the shouting, ran to the sea-wall and saw the figure of the youth floating face downward about a foot beneath the surface and about ten yards out. Without taking off any of his clothing, he plunged into the water and swam out to the youth, who by this time was apparently unconscious, and started to swim ashore with him.

On the way back the current caused the Constable to lose hold of the boy three times, but he was at last able to seize with one hand a lifebuoy which had been thrown out, while holding on to the youth with the other. By this time, he was completely exhausted, and while being drawn ashore lost his hold on the youth, who immediately disappeared under the water. The Constable was taken to Leith Hospital, where he was treated for shock and immersion. The youth’s body was later washed up by the tide.” 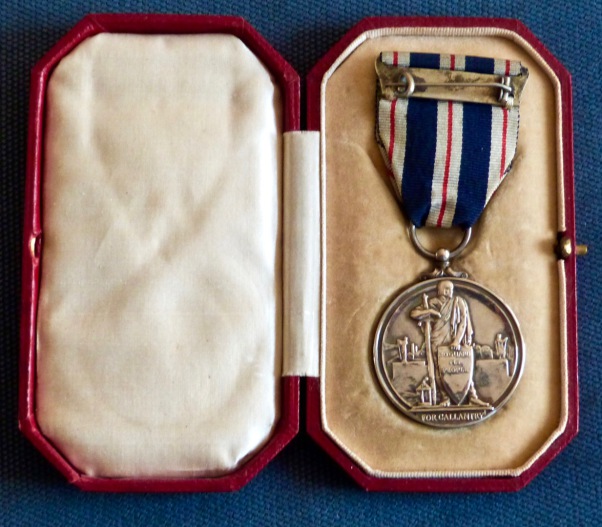 George Taylor Watt's KPM in its case of issue. This is the reverse view showing the words 'For Gallantry'.

He was transferred to ‘A’ Division on 5 May 1936 as PC 279 A. On the same day, he was commended in the Edinburgh City Police Weekly Record. The citation was as follows.

“Commended for promptitude and zeal displayed in dealing with an outbreak of fire.”

He advanced through the increments and would have worked from the Police Box system of beats in the Southside.

At some point, his collar number was changed to 147 A. 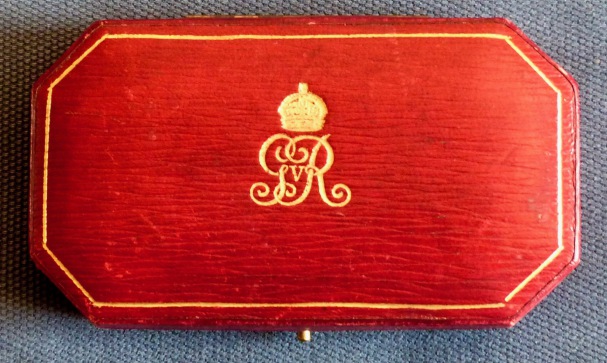 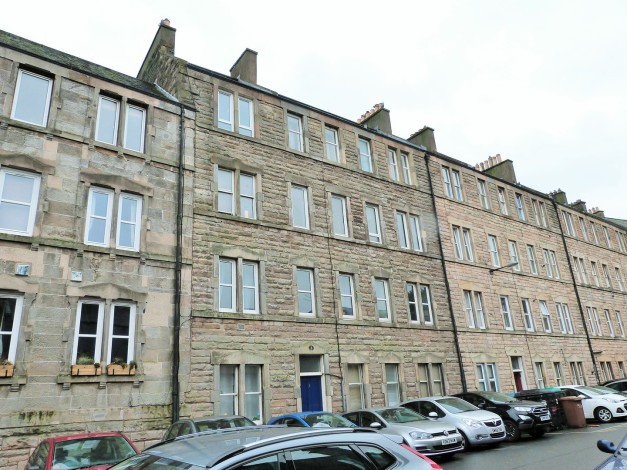 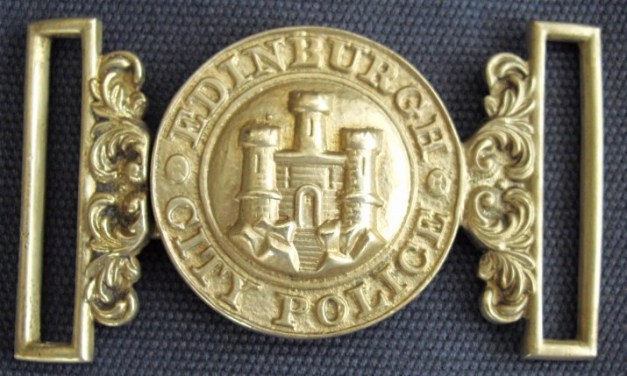 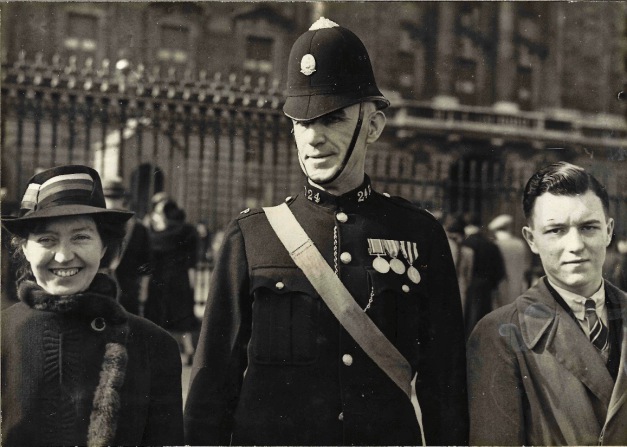 Robert joined the Army on 7 June 1917 “in terms of Scottish Office Circular dated 16 May 1917”. Like many others in Edinburgh City and Leith Burgh Police, he was posted to the Household Battalion and later transferred to 1st Battalion Scots Guards, serving in France and Belgium where he was wounded. He resumed duty with Leith Burgh Police on 10 April 1919. The medals he can be seen wearing in the picture above are the British War Medal and the Victory Medal.

On 2 November 1920, he transferred from LBP to Edinburgh City Police with “6 years and 20 days Police and Army Service counting towards pension.”

The Weekly Record of 28 February 1928 records that PC Robert Carrie had been “Commended for courageous conduct in stopping a runaway horse in The Shore, Leith on 8 February 1928.”

The Weekly Record of 13 May 1928 records that PC Carrie had been “Commended for vigilance and alertness shewn in effecting the arrest of a thief.”

‘The Scotsman’ of Monday 7 October 1940, under the heading, “LEITH BLACK-OUT ACCIDENTS”,  reported that:

“During the black-out at the weekend there were two accidents at Leith Docks, one of which was fatal. Late at night the sound of a splash was heard at the east end of the Edinburgh Dock, but nothing could be seen. Grappling operations were started and the body of a soldier, Private Henry Hunter was recovered from the water. The other accident occurred at the East Old Dock. An engineer, Hugh McMillan, (28), residing at 14 Annfield, Newhaven, was walking along the quayside when in the darkness, he fell into the water. Constable Robert Carrie heard cries for help  and running to the scene, dived into the water and supported McMillan until assistance arrived.  Both men were got out of the water, and McMillan was taken to Leith Hospital but after receiving treatment, was allowed home.”

The Weekly Record of 15 October 1940 records that PC Carrie had been Very highly commended for courageous conduct in rescuing a man from drowning in Leith Docks at night.”

The Scotsman’ of Wednesday 1 January 1941, under the heading, “KING’S POLICE AND FIRE SERVICES MEDAL”,  reported that the following men had been awarded the KPM:

The above entry was repeated in the Weekly Record of 1 January 1941.

It is possible that a relative of his, D. G. Carrie, joined ECP in 1938 although I am not certain of that. If you have a better picture of PC Carrie, please get in touch via enquiries@scottishpolicemedals.co.uk Thank you. 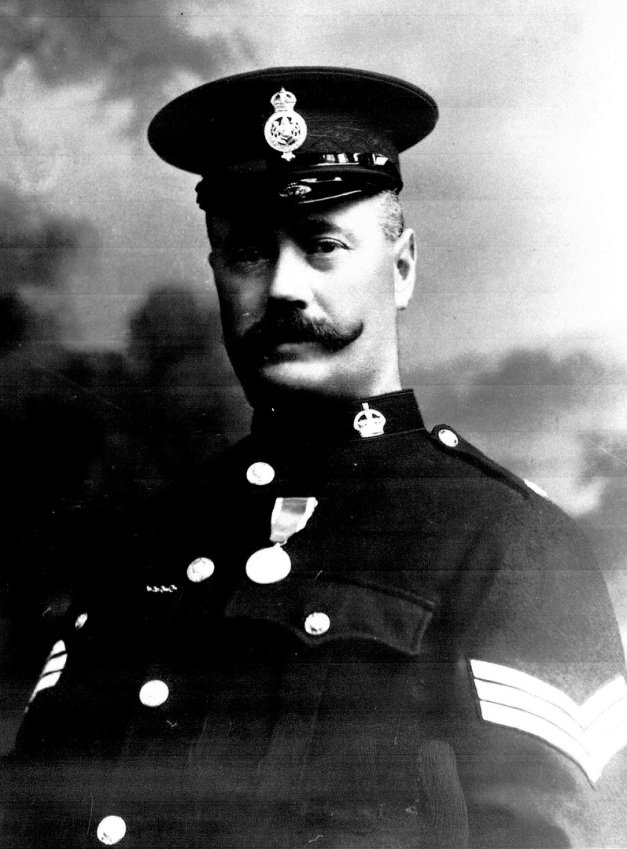 PS William Barron KPM. This was the first KPM for 'Conspicuous Gallantry' to be awarded for actions as a PC in Scotland after its institution in 1909. (Picture courtesy of Neil Barron McAuley, PS Barron's Grandson). 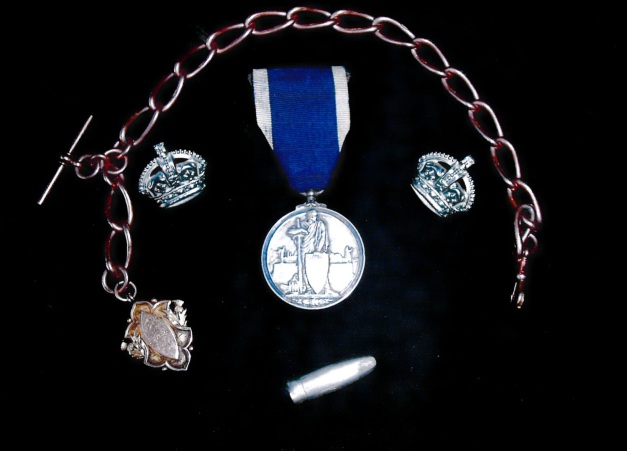 PS William Barron's KPM, an 'Albert' & fob presented to him by the people of Rothes, his collar badges and the bullet with which he was shot in the 'Rothes Shooting', 1905. (Picture courtesy of Neil Barron McAuley, PS Barron's Grandson). 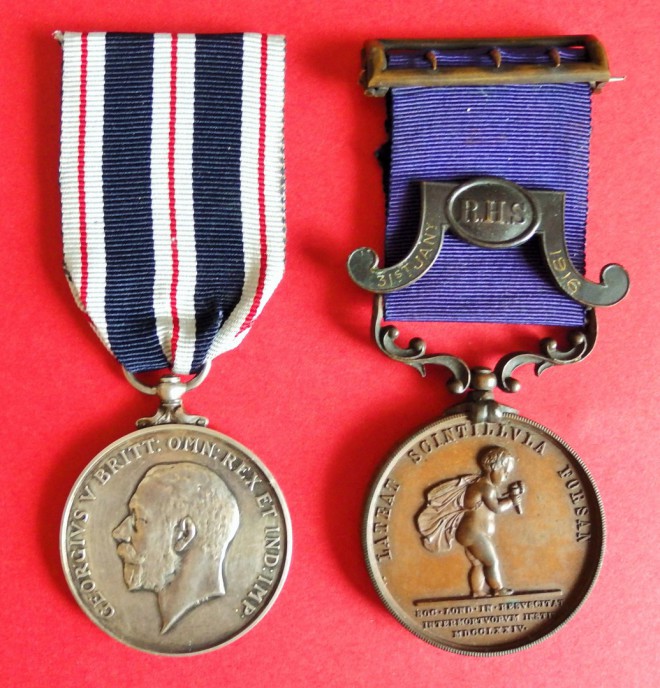 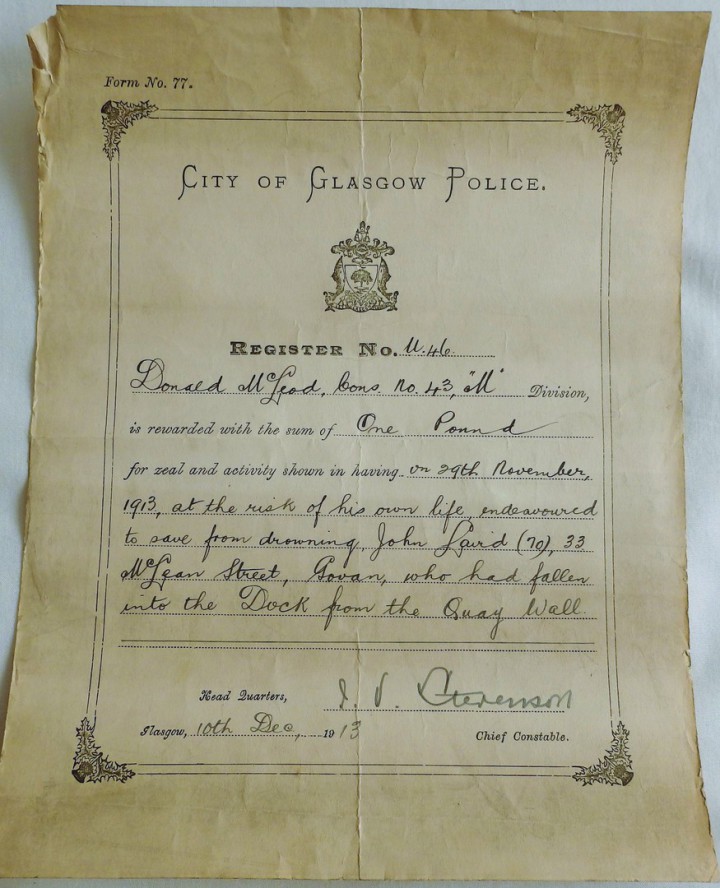 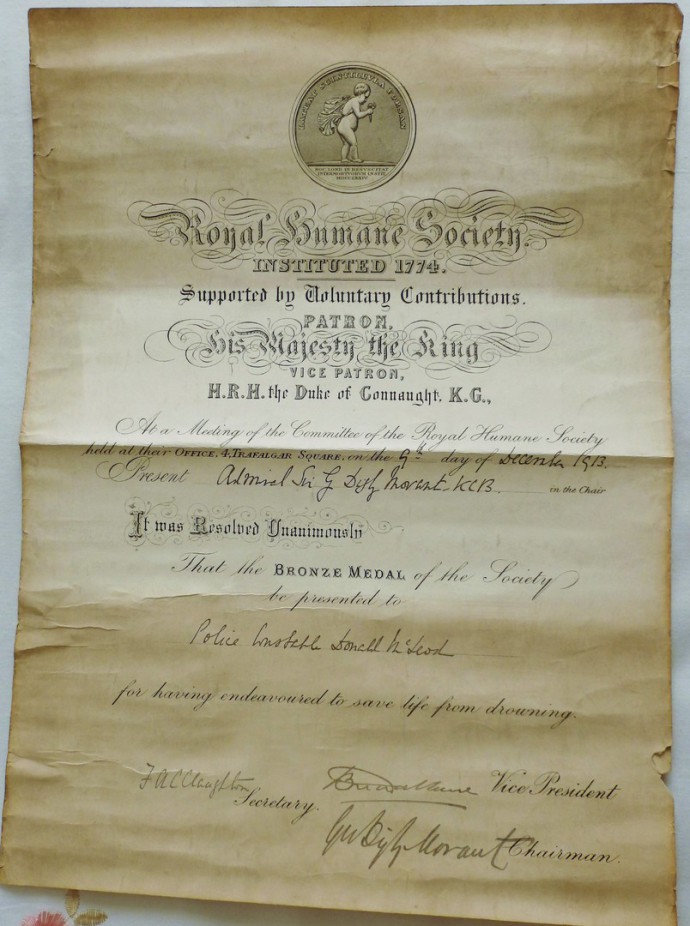 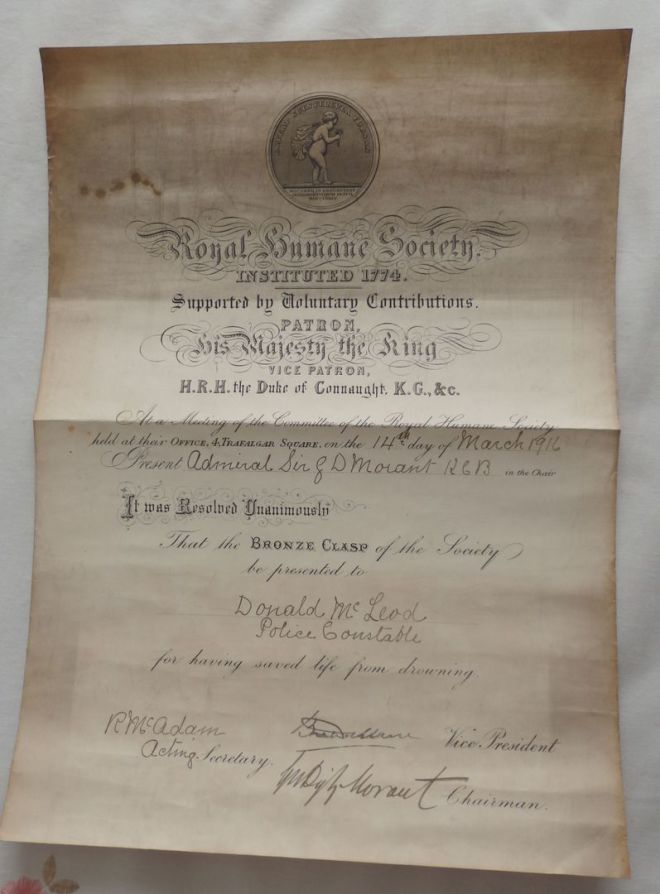 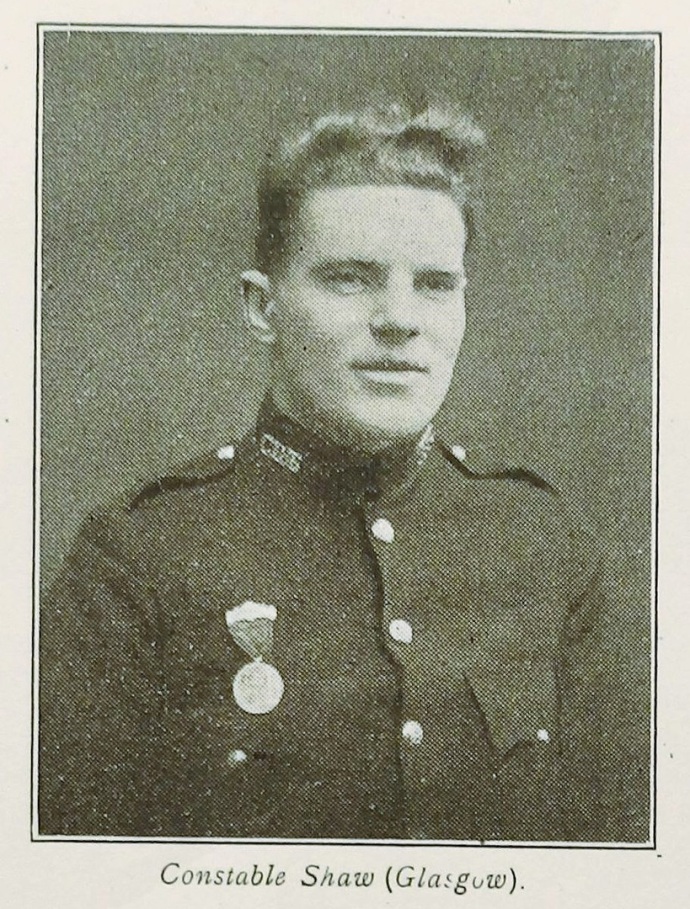 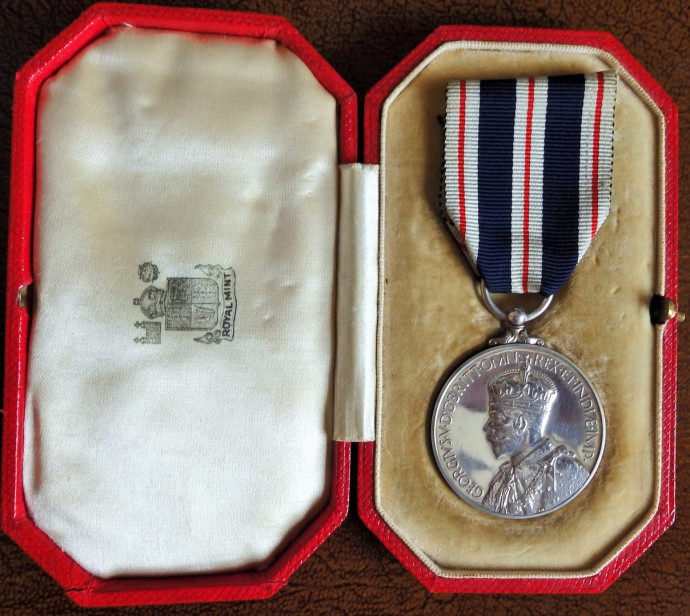 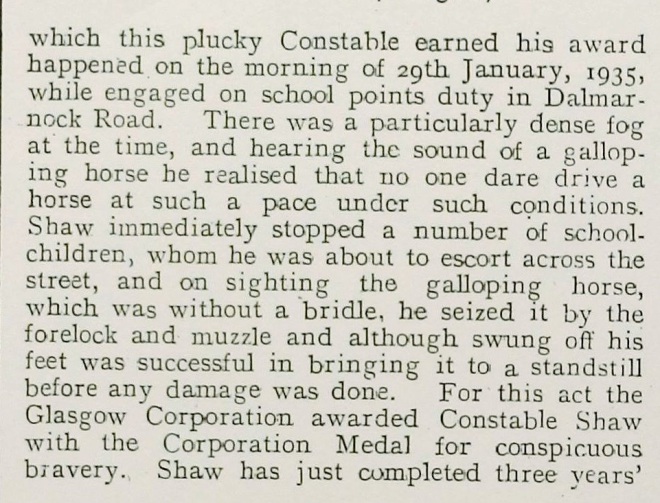 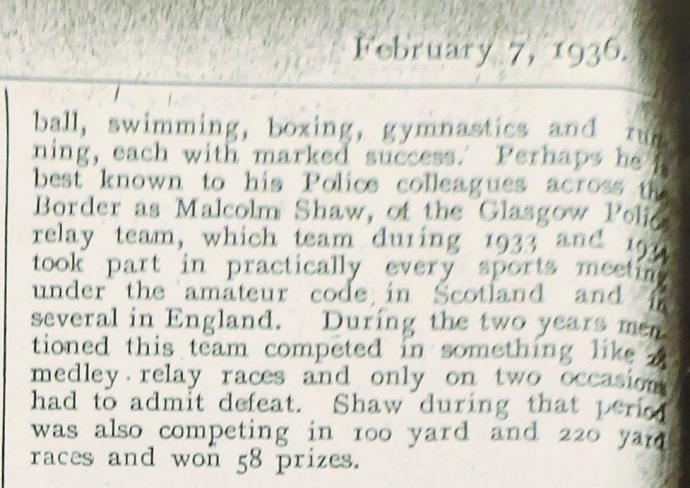 PC Shaw was awarded the King’s Police Medal in 1935 but his investiture was at Buckingham Palace on 18 February, 1936 when his medal was presented by King Edward VIII.

He is wearing his Glasgow Corporation Medal for Conspicuous Bravery in the picture above.

The newspaper cuttings above are from the Police Review and Police Gazette edition of 7 February, 1936.

I am indebted to Ian Hall for the images and information on PC Shaw’s KPM.