The Edinburgh City Police Cadets were originally known as ‘Boy Clerks’. I am not clear on when they began but it was certainly between the two wars as several joined up in World War 2.

Entrance to the scheme was via a competitive written and oral examination and although the height limit was 5’ 10” for the regular force, one had until their 19th birthday to reach that goal.

Certainly by the early 1970s, entrance was available to men and women.

The uniform was the same as regular officers with the addition of a blue cap band instead of the black and white dicing and shoulder flashes that stated ‘Police Cadet’ on tunics and coats.

Tuesdays were spent at the Force Training Department in Chambers Street, the day beginning with a parade followed by a ‘cross-country run’ through Holyrood Park and ending up at Infirmary Street Baths for swimming and lifesaving training for the ‘Bronze Medallion’.

During the block-release courses at Telford, Edinburgh City Police also trained the cadets from Berwick, Roxburgh & Selkirk Constabulary and those from the Lothians and Peebles Constabulary.

After lunch, it would either be classes on ‘professional studies’ or off to whichever community service project was running at that time.

There was also the opportunity to attend courses at Moray Sea School, Inverclyde and the West Highland school of Adventure in Applecross, Ross-shire and a few others.

Cadets took part in the Duke of Edinburgh Award (DoEA) scheme, the expedition training for which, took place in East Lothian, the Borders and along the start/end of the Pennine Way at Kirk Yetholm.

Longer term Community service projects were available at Dingleton Hospital near Melrose, the Royal Sick Children’s Hospital in Edinburgh and one or two other places and these linked into the DoEA scheme.

After turning 18, cadets were posted to the Divisional Stations at Braid Place, ‘A’ (South Side), Gayfield ‘B’, the West End ‘C’ and Leith ‘D’ and gained experience working in Administration, the Control Rooms and eventually at the Unit Beat Stations, Craigmillar, Mayfield, Drylaw, Oxgangs, Corstorphine and Portobello.

They stayed at the division until they turned 19 and if having successfully passed the entrance examination and medical, took their place at the 4 week Initial Course at the Scottish Police College, Tulliallan in Fife usually having been transferred to another territorial division as a Police Constable. 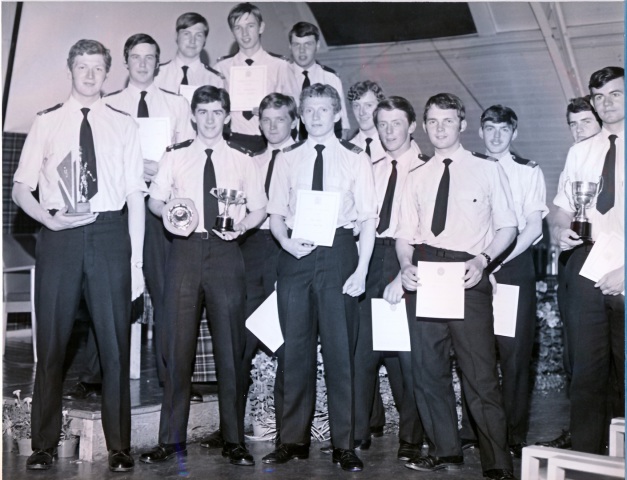 Annual Prize-giving at Training Department, No. 7 Chambers Street,Edinburgh in 1973.