Officer of the Most Excellent Order of the British Empire (OBE), 1948

Francis Horace Berry was one of many Edinburgh City Police officers who volunteered to fight in the First World War, some of whom did not return and are commemorated on this site. He was an Accountant in Canada at the outbreak of the war and returned to Scotland.

He joined Edinburgh City Police and later volunteered for the Lowland Mounted Brigade, was recommended for a Commission as an officer and was appointed 2nd Lieutenant in the 6th Royal Scots. He later volunteered for the Royal Flying Corps and qualified as an Observer. After successfully completing 37 missions, his plane was shot down over German lines in Northern France on October 1917 on his 38th and he and his pilot, Lieutenant W. D. Chambers, were taken prisoner.

Upon his discharge from the Army, he returned  to Edinburgh City Police and had a successful career as a Detective. On the tragic death of Assistant Chief Constable (ACC) Robert Thomson in 1940, he was appointed ACC in his place. He retired on pension on 15 September 1952.

Francis Horace Berry was born on 30 October 1891 in Richmond in Surrey. His father was John Berry, an Accountant with a Railway Company in St Pancras, London, and his mother, Louisa Alice Radden or Berry. His parents were married at St Saviour, formerly St James’ Parish Church, Essex on 14 September 1885.

The following were living at 25 Montpelier Road St Pancras, London on the night of the Census 1891:

The following were living at 40 Canaan Lane, Morningside, Edinburgh on the night of the Census 1901:

The following were living at 40 Canaan Lane, Morningside, Edinburgh on the night of the Census 1911:

During World War 1, his brother Walter served as Private No. 168 in the Scottish General Hospital, Royal Army Medical Corps, later as a Lance Corporal in 3rd King’s Own Scottish Borderers and was commissioned as a 2nd Lieutenant in the same battalion on 9 July 1918. He later married Mary McLellan Henderson in Bombay, India on 12 March 1928.

Sydney Arthur Berry joined Edinburgh City Police in 1929 after four years in the Metropolitan Police. He worked in plain clothes as a PC, was promoted to Sergeant in 1934, Inspector in 1938, Lieutenant in 1942 and Superintendent in 1946. He commanded “C” Division in the West End of Edinburgh before being appointed  Chief Constable of Dumfries and Galloway Constabulary in 1948. He remained there until 1965.

Military Service Prior to World War 1

Whilst still living in Edinburgh before the war, Francis joined the Lothian & Border Horse Yeomanry as a Trooper, leaving on 21 November 1909 to take up an appointment in Canada.

Francis Horace Berry joined Edinburgh City Police on 17 February 1914 when he was 22 years old. He was appointed as a 5th Class Constable on 25/- per week. It is possible that he was immediately posted to the Criminal Investigation Department (CID) as a Clerk, given his later career. His previous occupation was given as ‘Bank Clerk’ but he had been working as an Accountant in Canada.

Francis Berry resigned ‘for the purpose of joining the Army’ on 25 May 1915, the same day as William Booth Rennie Morren and Matthew Peacock.

He enlisted as a Private No. T/383, a Driver in the Lowland Mounted Brigade of the Army Service Corps. Like Morren and Peacock, he had originally attested on 20 May.  Like them, he was also recommended for a Commission as an officer and he was discharged from the Lowland Mounted Brigade upon his commission as a 2nd Lieutenant in the 6th Royal Scots on 27 August 1915. This was confirmed on Page 8544 of The London Gazette of 27 August 1915.

The table below is a summary of Francis Berry’s postings between 1915 and 1920. A more detailed analysis of his service is shown below. 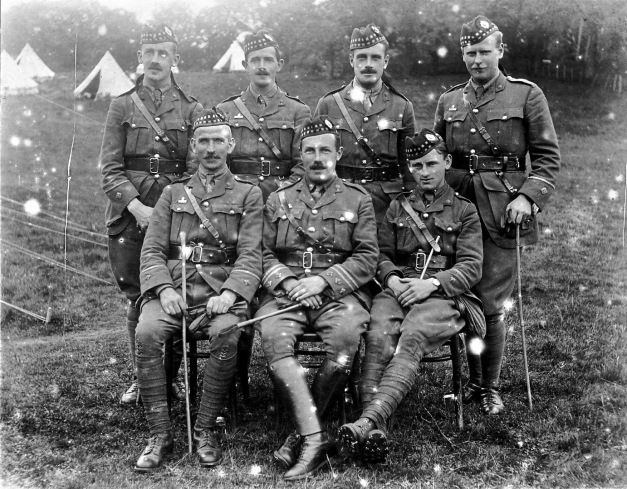 6th Royal Scots Officers, probably in Peebles in 1915. Extreme left, back row is Matthew Peacock and extreme right back row is William B R Morren. I think Francis Berry is immediately to the right of William Morren.

The edition of 27 August 1915  under the heading; ‘The Royal Scots (Lothian Regiment), recorded that ‘The undermentioned to be Second Lieutenants:-…Driver Francis Horace Berry from the Lowland Mounted Brigade, Army Service Corps. Dated 26 August 1915’.

Francis Berry was Commissioned into  the 6th Battalion Royal Scots (RS) and it is possible he is in the pictures with Lieutenants Morren and Peacock taken at Peebles and Portobello.

He certainly served in France with the combined 5th/6th Battalion the Royal Scots before he volunteered for, and was seconded to, the Royal Flying Corps.

After training, he was posted to No. 20 Squadron, Royal Flying Corps.

No 20 Squadron was formed on 1 September 1915, as a fighter-reconnaissance unit of the Royal Flying Corps and became arguably the highest scoring and possibly the most decorated British Squadron on the Western Front. The squadron transferred from the RFC to the newly formed Royal Air Force on 1 April 1918.

The operations 2nd Lieutenant Francis Berry flew in France and Belgium are listed below:

Supplement to the London Gazette, 17 September 1917 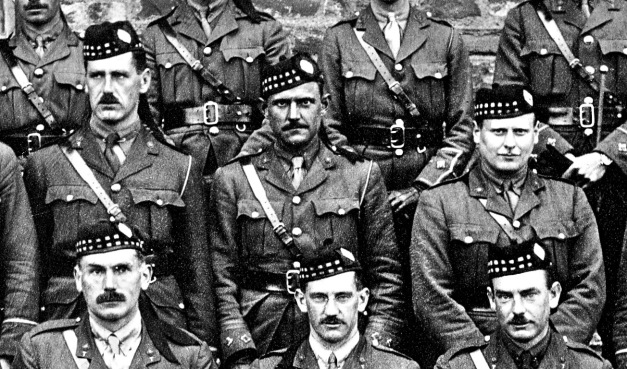 The squadron was clearly working hard, and this is confirmed by the letter of appreciation from Lieutenant Colonel J. M. Scott.

“Colonel Murphy , D.S.O., M.C.’, officer Commanding 2nd Wing, wishes to express his appreciation of the work done today by the Squadrons of the Army Wing.

A very great deal of observation, registration, and photography has been accomplished by the Corps Wing without a single casualty.

This is a most unusual record, and is due, in Colonel Murphy’s opinion, very largely to the devoted  and gallant manner in which the pilots and observers have carried out their duties.

The following is an extract from the War Diary of 20 Squadron RFC in September 1916.

On 21st September 1917, the Squadron having been re-equipped with Bristol Fighters, the last F.E.2d was returned to No. 1 Aircraft Depot, St Omer.

On first landing in France on 16thJanuary 1916, the Squadron was equipped with the F. E.2b machine (120H.P. Beardmore Engine). These were changed to F.E.2d’s in June 1916, the latter machine having a 250 H.P. Rolls Royce engine. At the time, the F. E.2d was the finest two-seater fighting machine in existence, and the Squadron soon won a reputation for hard and successful fighting against heavy odds.

The armament was 3 Lewis Guns, one of which was fixed in the axis of the machine , and was fired by the pilot, by a ‘Bowden’ Cable, on the Control Lever.

The other two were fired by the observer, one to fire forwards and the other backwards over the top plane.

The principle duties of the Squadron on these machines were:

Please see the pictures of the F.E. 2b and 2d below.

Supplement to the London Gazette, 2 October 1917

The following letter dated  9 October 1917 is in the Squadron War Diary:

On 8th instance, the weather was worse than it had been during the last few days. In spite of this, 10 reconnaissances and three contact patrols were carried out by the 2nd Brigade , and desired information with regard to enemy movements obtained. No. 20 Squadron went out when the weather was extremely bad.

650 rounds were fired at ground targets by the 1stWing.

With aeroplane observation, 32 hostile batteries were successfully engaged for destruction, four pits were destroyed, six damaged, nine explosions, and 11 fires caused. Forty-three zone calls were sent down by machines of the 2nd Brigade.

A few enemy machines were encountered and four were driven down out of control by No. 1 Squadron.

Two of our aeroplanes are missing.

The following is a hand-written  extract from the Squadron War Diary dated 8 October 1917 and describes the events of the action in which Lieutenant Chambers and 2nd Lieutenant Berry were posted missing. This was Lt. Berry’s 38th mission:

“The reconnaissance was especially ordered by XI Army owing to uneasiness at Army HQ of counter attacks.

Rain was falling when the machines left the ground and clouds were found to be 2 – 3000 feet.

2nd Lt Taylor and Sgt. Benyer got to Roules and Menin. Lt Makepiece and Lt. Woodbridge reconnoitred Kohler and Comines at 1500 ft. Lt. Dalley and Lt. Brooke got to Menin and Halluin and saw much valuable movement. At 4 PM they reported the Gheluwe – Menin road full of troops moving both directions. They fired 4 drums of ammunition into them at 1500 feet.

Lt. Chambers and Lt. Berry did not return.” 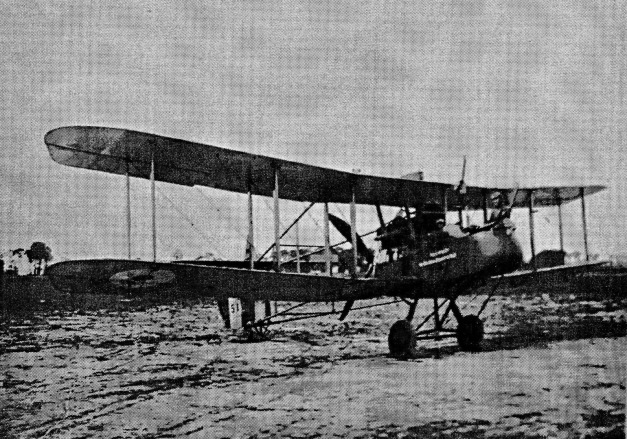 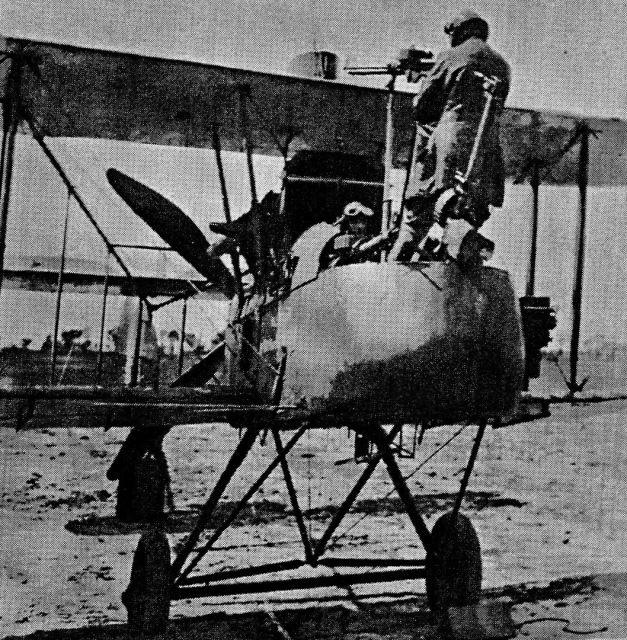 Supplement to the London Gazette, 14 September 1920

Among the entries on page 9279 of the edition of 14 September 1920 listing the officers of the 6th Battalion Royal Scots having resigned their commissions with effect from 15 September was ‘Lt. F. H. Berry’. 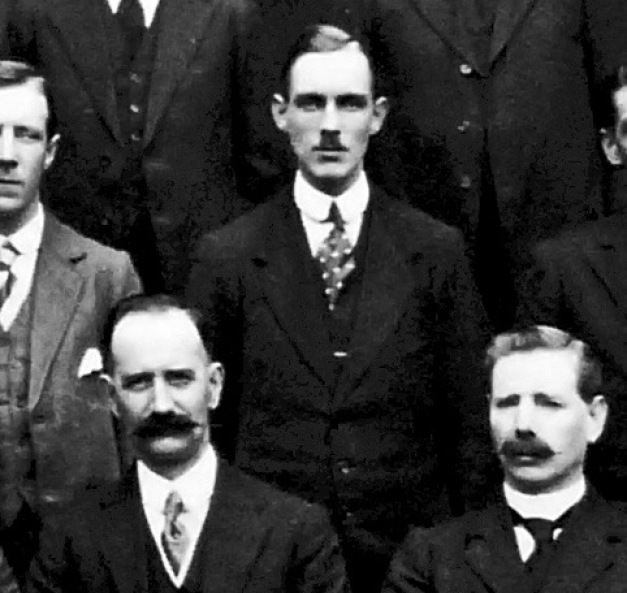 At the end of World War 1, a huge operation was undertaken to create a card index for all service personnel entitled to the award of medals. These cards are known as ‘Medal Index Cards’ (MIC). The MIC for ‘F. H. Berry’ records that he served in ‘5/6 R. Scots’ as a ‘2/Lieut.’ and in the ‘RFC & RAF’ as a ‘Lieut’. The MIC contains reference numbers that show the Medal Roll in which a person’s name might be found. Like Francis Berry, many men served in multiple units, but the medals should only have been issued by one, usually the last in which he served. So it was with Lt. Berry. His British War and Victory Medal issue can be found in the RFC Medal Roll reference No. NW/5/30515. The medals were issued to him in 1923 at the Canaan Lane address in Edinburgh.

On 16 October 1926, he was promoted to Inspector and transferred to the Court Officers Department.

On 3 November 1931, Francis Berry was promoted to Lieutenant.

On 28 May 1933, Lieutenant Berry was transferred to E Division for the inauguration of the Police Box System.

Lieutenant Berry was promoted to Superintendent on 7 June 1933.

On 24 April 1934, he was transferred to the CID as head of department.

Transfer to A Division

On 15 October 1935, Francis Berry was transferred to A Division in Braid Place. 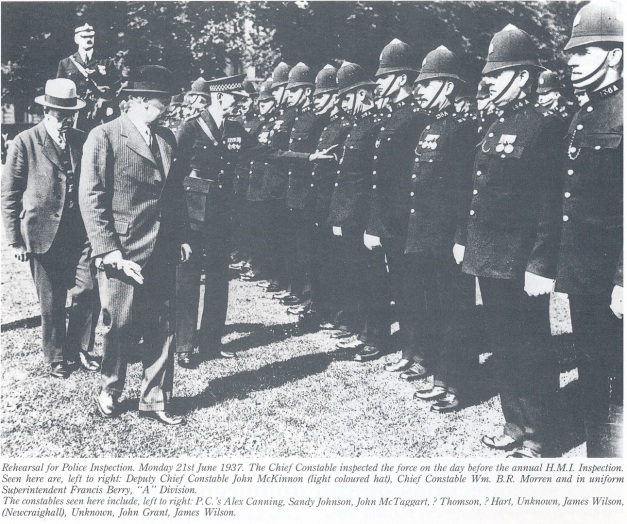 Superintendent Francis Berry is the man in uniform with his left hand out towards the line of Constables. 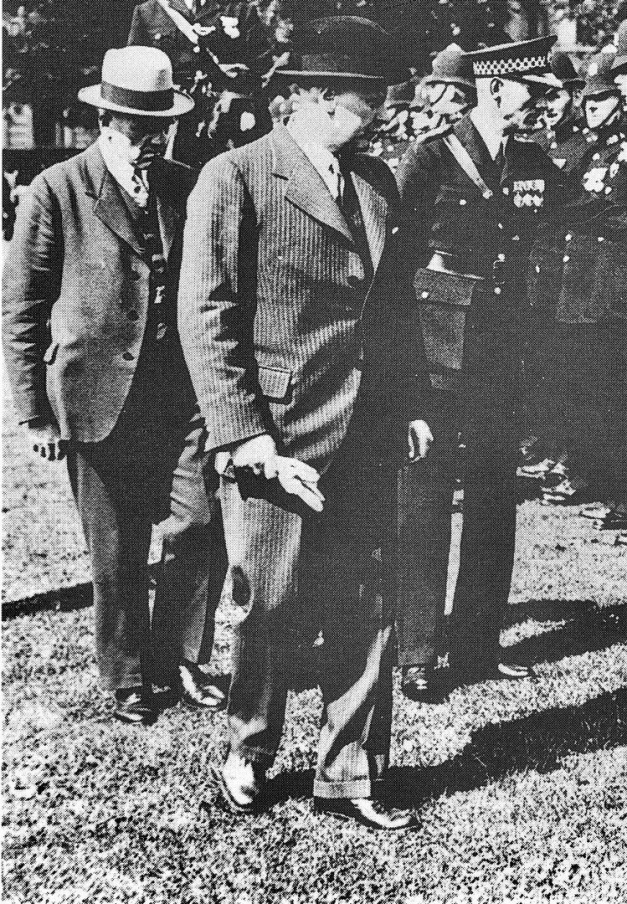 Left to right, DCC MacKinnon, CC William B R Morren, Superintendent Berry, A Division whose War Medals and his GVR Jubilee medal can be clearly seen on his tunic.

Valuation Roll for the Burgh of Edinburgh 1940

The Valuation Roll for Edinburgh in 1940 records that Francis H. Berry, Superintendent of Police was living at 2 Kirkgate, Liberton, Edinburgh in that year.

On 6 August 1940, Francis Berry was “Promoted to the rank and pay of Junior Assistant Chief Constable (War Duties and Air Raid Precautions (ARP). The was the subject of an article in the Glasgow Herald newspaper.

The following article appeared in the edition of that day:

Supplement to the London Gazette, 1 January 1948

The Supplement to the London Gazette of 1 January 1948 published a list of people ‘To be Ordinary Officers of the Civil Division of the said Most Excellent Order (of the British Empire). Included in the list of those appointed was Francis Horace Berry Esq., Assistant Chief Constable, Edinburgh City Police.’

I have been unable to find any records of children to the couple or of Elizabeth Strathdee Berry’s death.

I have published two pictures of Francis Berry as a police officer but please get in touch if you can supply any others. Thank you. 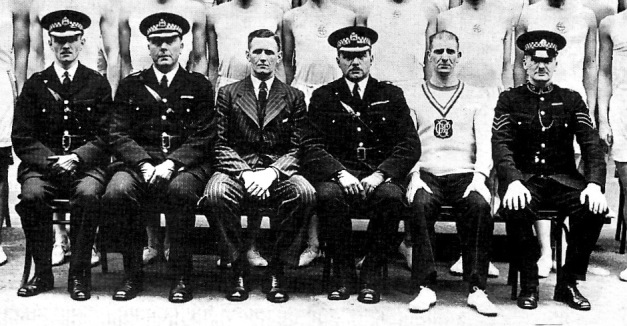 This picture features on the extreme left, Inspector Sydney A. Berry, Francis' brother and in the striped suit, AAC Thomson whose tragic death lead to Francis Berrry's promotion to that rank.