The King Edward VII Police (Scotland) Medal 1903 is more commonly known as "The Visit to Scotland Medal, 1903". However, if you look up the medal in the order of precedence, that is its official name.

The medal was initially intended to be awarded to those Police Officers who were on duty for King Edward VII's Visit to Edinburgh and Glasgow in May 1903.

It is difficult to imagine now but thousands of enthusiastic crowds came out to see Their Majesties in Edinburgh, Glasgow and Midlothian.

Mutual Aid was a well-known concept due to the need for forces to reinforce each other during industrial disputes and this occasion was no different. Forces from all over central Scotland came to Edinburgh and Glasgow in support of those forces.

Each of those officers on 'Aid' was entitled to the 1903 medal and that is what makes collecting and identifying the recipients so rewarding.

My long-term aim is to compile a medal roll for this medal and hopefully any collectors looking at the site will assist by enabling me to record the existence of any 1903 medals they have.

The sections below are quotations from correspondence concerning the planning for the medal between the Scottish Office, the Royal Mint and the Royal Household. There are far more documents than it is possible to use on a site like this but they are all available at The National Archives at Kew, London.

How The Design of the Medal Was Decided

This meant that the front of the medal is identical to the Coronation Medal, 1902.

It was also proposed that in addition to the inscription that reads on the rear,

that there should be the words:

It was only after much correspondence and the realisation that costs would be doubled that the proposal was abandoned and the following wording adopted in every case, i.e. for Police, Fire Brigade, St Andrew's Ambulance Association and the Army. 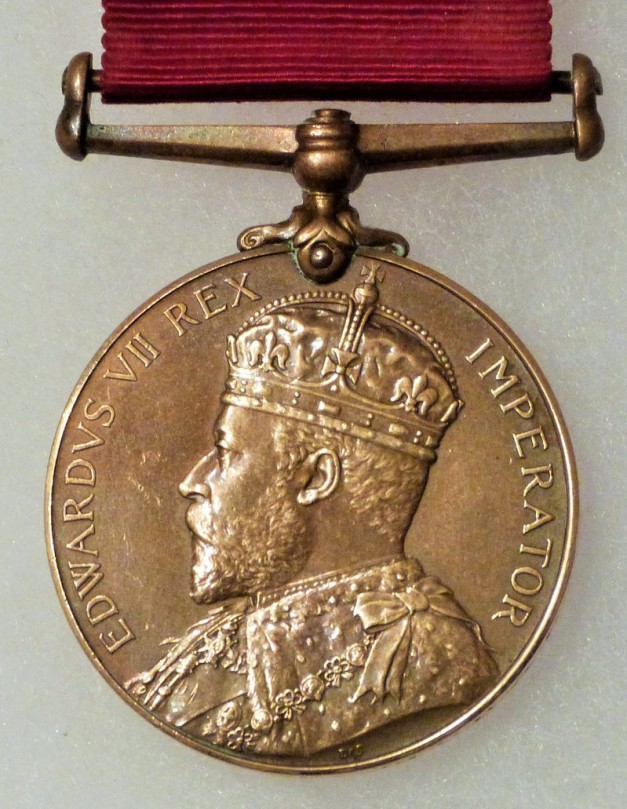 In a letter from J.H. Gascoigne of the Scottish Office, Whitehall, S.W. dated 7 September 1903 wrote to Mr W. Rigg of The Royal Mint:

The numbers decided, 3,000, and the Police Forces involved

In a letter dated 8 September, 1903, from the Master of the Royal Mint to the Under Secretary of State for Scotland, he confirms:

The Decision Process involved agreement between The Royal Household, The Scottish Office and The Royal Mint

In a letter from Lord Balfour of Burleigh marked 'Balmoral Castle' dated 17 September 1903, he states:

This was received by The Royal Mint with some dismay.

The Practical Difficulties With the Original Design Emerge

It was becoming clear that the practical difficulties of "putting the Royal Commands" into reality were becoming insurmountable and this is shown in a letter from J.H. Gascoigne to The Royal Mint dated 21 September 1903.

Correspondence dated 1903 from the Scottish Office, details the detachments of police required for the Royal Engagements in the City and County of Edinburgh.

The Objections of the Royal Mint to the Original Design

A letter on behalf of the Master of the Royal Mint dated 24 September 1903 states:

The Decision is Made for a Simple Design

In a letter from James M. Dodds, Under Secretary of State at the Scottish Office, Whitehall, S.W. dated 28 September 1903, he writes to the Deputy Master & Comptroller of the Royal Mint as follows: This is discussed in a letter from the Scottish Office signed by Reginald Macleod dated 8 October 1903.

The pattern of the thistle brooch was approved in correspondence signed by Reginald Macleod dated 21 October 1903.

The Presentation of the Medals in 1904

The actual numbers of medals awarded to Police Officers:

Taken from articles in The Police Review and Parade Gossip (PR & PG) newspaper during 1904.

From the list above, it can be concluded that in May 1903, those police forces performing duty for the Royal Visit to the County of Edinburgh were:

Those police forces confirmed as performing duty in the City of Edinburgh were:

Whilst I have no documentation to prove it,  Ayrshire Constabulary are not mentioned in any of the Edinburgh correspondence. I think it reasonable to infer that they were one of the police forces assisting City of Glasgow Police in performing duty for the Royal Visit to Glasgow as follows.

According to the 'Belfast Newsletter' of Saturday 9 April, 1904, "the Right Honourable A. Graham Murray, Secretary of State for Scotland, on the day before in George Square, Glasgow, presented 1315 police medals; 910 to the City Police and 405 to the County Police present".

Also present at the Royal Visit to Glasgow were officers from Govan, Partick, Kinning Park Lanarkshire and Renfrewshire and it is highly likely that the 410 medals issued to County forces include men from these forces.

The number of medals distributed to the Firemen, Soldiers and St Andrew's Ambulance Ambulance Association staff on duty in Edinburgh and Glasgow during the Royal Visit are still to be determined.

Thanks to George Barnsley of Lanarkshire Police History Society for the sending me the Falkirk Heralds of 1903 and 1904 with the information concerning Stirlingshire Constabulary.

The pattern of ribbon for the medal was approved on 4 December 1903 and was to be "plain red ribbon" manufactured by Messrs Dalton, Barton & Co of London.

The original sample can be seen in the archives of the Royal Mint held at The National Archives in Kew. Despite what many respected sources contend, the ribbon was never watered silk, it was never bright red or orange. It is plain darkish red silk ribbon with no watermarks whatsoever. It is 32 mm wide.

It would seem that no more than 3000 medals were ever struck but that the same "Scottish Police" medal was issued irrespective of whether it went to a Police Officer, a Fireman, a Soldier or a member of the St Andrew's Ambulance association.

The picture on the left is of a sample bought on 3 October 1912 by PS Peter Haig of East Lothian Constabulary (His medals can be seen under Scottish County Police Forces).

He bought the ribbon along with the sample of King George V Coronation (Police) Medal Ribbon from A.C Heath, Military Contractor, Manufacturer and Warehousemen, of 1-5 Barrack Road, Hounslow Heath, Middlesex. He paid £0.2/- per yard and £0.0.1d for the postage to the Burgh Police Office, Tranent in East Lothian.

The 1903 ribbon bought by PS Haig is identical to the original sample in The National Archives and to that on many of my medals.

The Original Pattern of Ribbon manufactured for The Royal Mint by Messrs Dalton, Barton & Co, London The original sample of 1903 Medal Ribbon

Modern Replacement Ribbon Manufactured in 2012 and available from this website 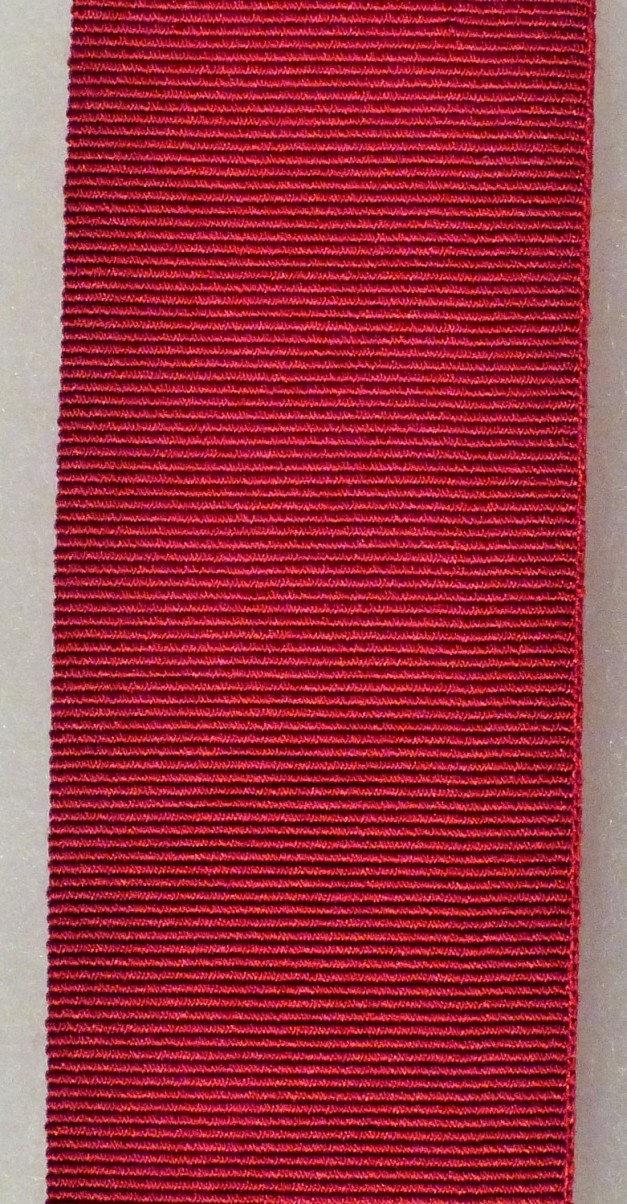 You will often see Police (Scotland) 1903 medals sold with bright scarlet ribbons which are often wider than the suspension bar or, with a heavy watered silk effect. They are not accurate.

The correct width of the ribbon should be 32mm, no more, no less. It should be in plain dark red silk, if original.

In the past, I have bought from respected organisations, replacement ribbon that was bright orange. When I queried the colour I was assured that it was correct. That did not seem right to me since almost every medal that appears to have ‘original’ ribbon I have seen is the dark red fabric that collectors will be familiar with.

Having found the original sample in the Royal Mint records at the National Archives, that is sufficient evidence that the correct ribbon is as described above.

I have a small supply of authentic modern replacement ribbon manufactured by a well-known and reputable Military Tailor. Please email me on enquiries@scottishpolicemedals.co.uk with your ribbon needs.