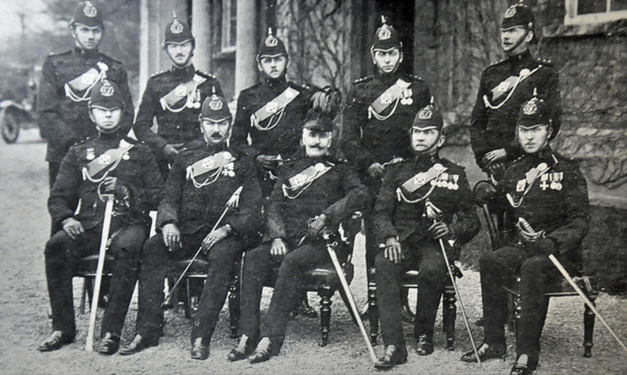 I recently saw an online  discussion on Freemasonry in the UK police and I was reminded of some documents I came across when researching the life of Sergeant Henry Connolly of County Louth RIC, late last year. The only ‘secret society’ a member of the RIC was permitted to be a member of was specifically, Freemasonry.

The ranks below Head Constable, at least until around 1916 - 1922,  were predominantly Roman Catholic and forbidden from membership of Freemasonry. The ranks of Cadet Officer upwards were overwhelmingly Protestant and therefore under no such restriction. The following notes do not purport to be a study of Freemasonry in the RIC, they are simply the ‘bare bones’ of the career of one such officer who was a member of that organisation.

Recommendation for the RIC

Before a recruit to the RIC was considered, he had to be recommended by a senior officer of the force or some prominent individual in a locality including religious clergy of several denominations.

When Henry Connolly joined the RIC on 15 August, 1894, he was recommended by District Inspector Lawlor of Clones, Co. Monaghan.

D. I. Lawlor was John Elliot Cairnes Lawlor, born 15 October, 1848 in the County of Derry, the son of John Hilliard Lawlor and his wife, Catherine Cairnes or Lawlor.

John Hilliard Lawlor was born in Tralee in 1819. He married Catherine Cairnes, daughter of Lt. Col. John Elliot Cairnes of Tyrone. The couple had eleven other children. John H. Lawlor was a Bank Manager in Ballymena, Co. Antrim and was murdered on 31 May, 1889 by the Cashier of the Provincial Bank who then immediately committed suicide. A full report can be found in the Ballymena Observer of 7 June, 1889.

John E. C.Lawlor was baptised on “5 November, 1848 in the Parish Church of Agherton, Portstewart, Co. Londonderry by the Rector of the Parish, S. Gwynn”.

Cadetship in the RIC

Lawlor joined the RIC as a Cadet on 30 October, 1867 aged 19 years and 15 days. He was single and Protestant with ‘relations in Co. Antrim and Co. Kerry’.

He remained in Co. Derry until 1 August, 1871 when he transferred to Co. Cavan.

Whilst stationed in Cavan, the records of the Grand Lodge of Freemasons in Ireland dated 23 November, 1875 appear to show that “John E. C. Lawlor joined Lodge No. 310 Killeshandra, Co. Cavan from Lodge No. 431”.

Lodge No. 431 was in Ballymena, Co. Antrim where he had family and it is likely his first entry to Freemasonry was via this route. In his late father's obituary in the Ballymena Observer of 7 June, 1889, it is recorded that the late John Hilliard Lawlor "was a distinguished member of the Masonic body in connection with the local Lodge No. 431..."

The earliest date he could have become a Freemason was on his 21st birthday in October, 1869, more than likely proposed by his father?

He was promoted to 1st Sub-Inspector on 28 July, 1882 and on 8 October that year, he was transferred to the West Riding of Co. Cork.

From that date until the end of September, 1887, J. E. C. Lawlor served in County’s Mayo South, Tyrone, Kilkenny and Westmeath. From 1 October, 1890, he was posted to Co. Monaghan. It was during this posting that he recommended Henry Connolly of Cootehill for the RIC.

Stationed in Co Down

He was stationed here until 1 April, 1894 when he was posted to Rathfriland, Co. Down.

The final entry on John Elliot Cairnes Lawlor’s personal file states “Died on 10th September, 1899”. His death was registered in the District of St Olave, Southwark in London.

His death notice was published in the Coleraine Chronicle of 16 September, 1899 stating that he had died in Guy's Hospital, London.

His records do not record any marriage and so far, I have found no trace of any marriage in Ireland or the UK.

I do not find it unusual that the more senior ranks of the RIC were involved in Freemasonry at this time as the ranks of the police in Scotland most certainly were quite open regarding their membership and the Police Review and Parade Gossip newspaper regularly featured articles celebrating masonic promotions for members of the Scottish Police forces.

Perhaps the best example of this was the funeral of the late Chief Constable of the County of Fife, James Tennant Gordon OBE KPM in 1934. In a two page report, the newspapers detailed his untimely death whilst playing golf with the Provost of Cupar in St Andrews, his achievements in the police and his 30+ year masonic career in which he held almost every honour and office it was possible to hold at Lodge, County and Grand Lodge of Scotland level.

Is that still possible today?

If anyone has a picture of District Inspector John Elliot Cairnes Lawlor to add to this that would just be ‘the icing on the cake’.

Please feel free to contact me to add further information or to correct any inaccuracies, the responsibility for which, is entirely mine.