David Edgar Beattie was born on 25 July 1893 at Castleyards, Torthorwald, Dumfriesshire. His father was James Beattie, a Ploughman and his mother, Mary Boyes or Beattie. They had been married at Torthorwald on 1 January 1892.

The following were living at Broad Chapel Road, Broad Chapel, Lochmaben, Dumfriesshire on the night of the Census 1891.

Mary Boyes is the future wife of James Beattie and the future mother of David Edgar Beattie. They would marry the following year.

The following were living at Longrigghead Cottages No. 1, Kirkmichael, Dumfriesshire on the night of the Census 1901.

Elizabeth Laidlaw Beattie was born on 2 October 1901 at Lochbrighead. Her father was James Beattie, a Woodman and her mother, Mary Boyes or Beattie. Her father registered her birth.

Sarah Muir Beattie was born on 28 June 1903 at Lochbrighead Cottage. Her father was James Beattie, a Woodman and her mother, Mary Boyes or Beattie. Her father registered her birth.

Mary Boyes Beattie was born on 8 August 1905 at Lochbrighead. Her father was James Beattie, a Woodman and her mother, Mary Boyes or Beattie. Her father registered her birth.

Mary Boyes or Beattie, (34), married to James Beattie, Woodman, died on 30 August 1905, at Lochbrighead, Dumfries. Her husband registered her death. This is the death of PC David Beattie’s mother.

Mary’s parents were William Boyes, a Ploughman, (Deceased),  and Sarah Mair or Boyes

The following were living at Nethermill, Dumfriesshire, on the night of the Census 1911.

It seems that James Beattie’s sister,  Mary Boyes Beattie, has taken over the Housekeeping and child minding duties after her sister-in -law died.

Among the 16 people living at Roundfell Farm, Southwick, Kirkcudbrightshire, on the night of the Census 1911 was the following. 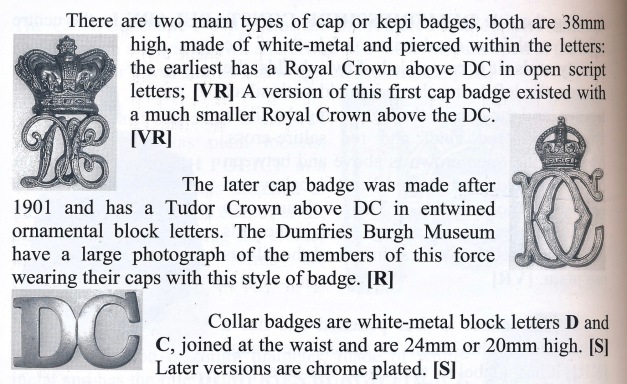 two types of Dumfriesshire Kepi/Cap Badges and an example of a Collar or Epaulette Badge. (Courtesy of John Green's Book).

He was initially engaged as an ‘Additional Constable’ whose wages were paid by the Annan and Nith Fisheries Boards and his duties would primarily involve anti-poaching matters. In this capacity he served at Dumfries, Glencaple, Annan, Lochmaben and Moffat.

On 8 June,1914 he was transferred to general police duties and was stationed at Dumfries and Kirkconnel before enlisting in the Scots Guards in May,1915.

David Edgar Beattie enlisted in the Scots Guards as Private No. 13891. He probably trained at the Guards Dept in Caterham in Surrey.

He was described as 21 years, 5’ 11”, and his former occupation was, ‘Policeman’. Before being posted to the 1st Battalion in France, he served with the 3rd Reserve Battalion, Scots Guards. His Medal Index Card (MIC shows that he arrived in the French Theatre of War on 4 October 1915.

Mary Boyes Beattie, (45), Housekeeper of Nethermill, Kirkmichael, died there on 14 March 1916. She was the daughter of David Beattie, a Blacksmith and Elizabeth Laidlaw or Beattie, both deceased. Her brother, James Beattie, registered her death. This is the death of the Beattie children’s Aunt Mary who had looked after them since the death of their mother in 1905. 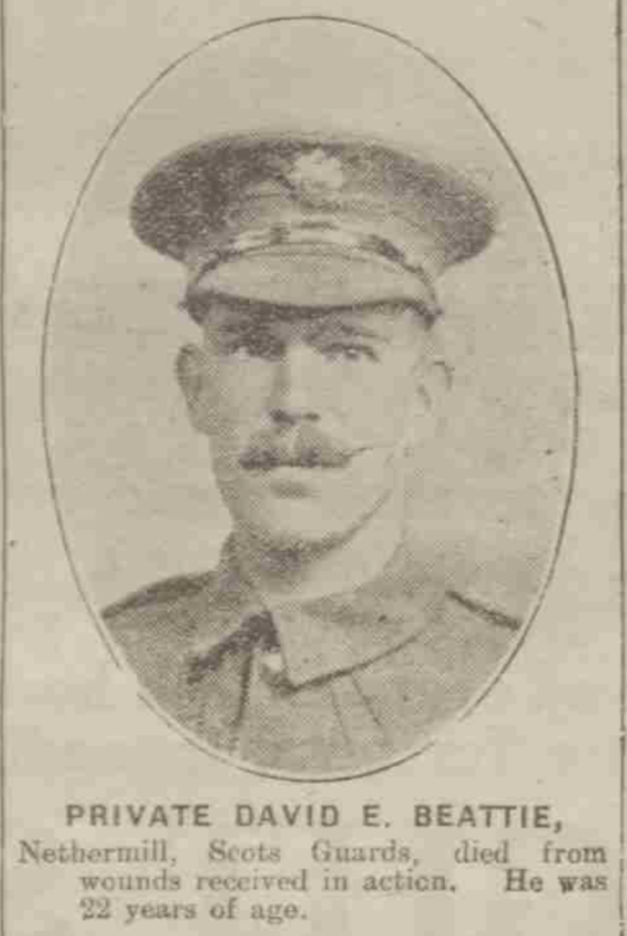 On 15 September 1916, David Beattie was wounded during fighting on the Somme Front (a gunshot wound (GSW) to a leg) and he lost much blood. He concealed himself in a German dugout for 48 hours before being recovered from the field. During that time he had no food.

He was repatriated to the 2nd Western General Military Hospital in Manchester and died of his wounds there on 4 October 1916.

David’s younger brother, George Beattie, an 18 year old Private, No. 14603, with the 11th Battalion Cameronians (Scottish Rifles) died on the 3 October 1916 while serving in Salonika. A double tragedy for the family, he is buried in Karasouli Military Cemetery, Greece.

George was entitled to the award of the British War and Victory Medals and this is confirmed in the Scottish Rifles Medal Roll dated 28 April 1920.

David was interred in the family grave in Torthorwald Parish Churchyard on 9 October 1916. The grave now has a Military Headstone. He is also remembered on the War Memorial at Nethermill, Dumfriesshire and on the war memorial at Dumfries & Galloway Constabulary Museum, Loreburn Street Police Station, Dumfries. 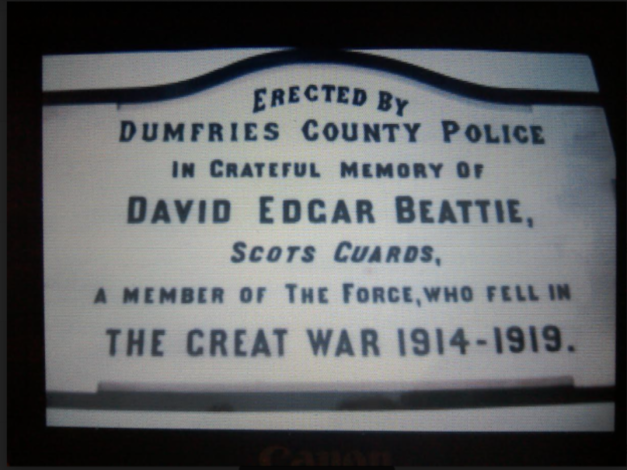 Under the banner, “Nethermill Man Loses Both Sons”, the Dumfries & Galloway Standard of 25 October 1916 reported the following on page 3.

Private Beattie, who was a nephew of Councillor Boggis, Dumfries, was a little over seventeen years of age, and joined the army about two years ago. Some months ago, he went to Salonika.

Before enlisting, he was employed as a farm servant. His only brother, Private David E. Beattie, Scots Guards, died of wounds, on 4th October, only a day after the death of his brother George”.

The Army Dependents Pension Case No. D. P. B. 13 dated 15 May 1917, in the name of Guardsman 13891 David Edgar Beattie, who had died of wounds on 4 October 1916, records that Mr James Beattie, his father and next of kin, Nethermill, Kirkmichael, Dumfriesshire, had been awarded a pension of ‘Ten Shillings’ per week from 8 May 1917. 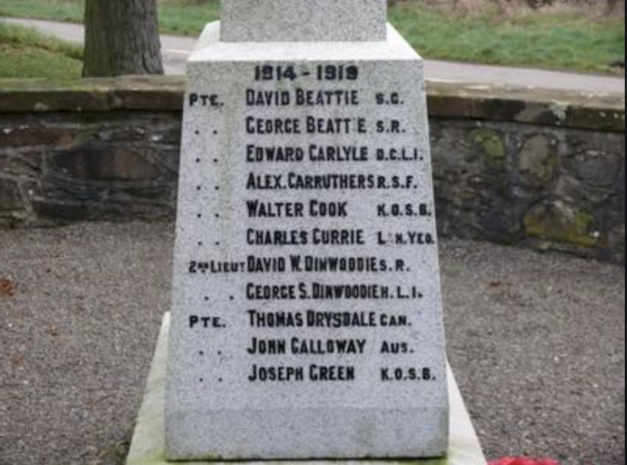 The War Memorial at Nethermill, Dumfriesshire where David and George Beattie are commemorated. 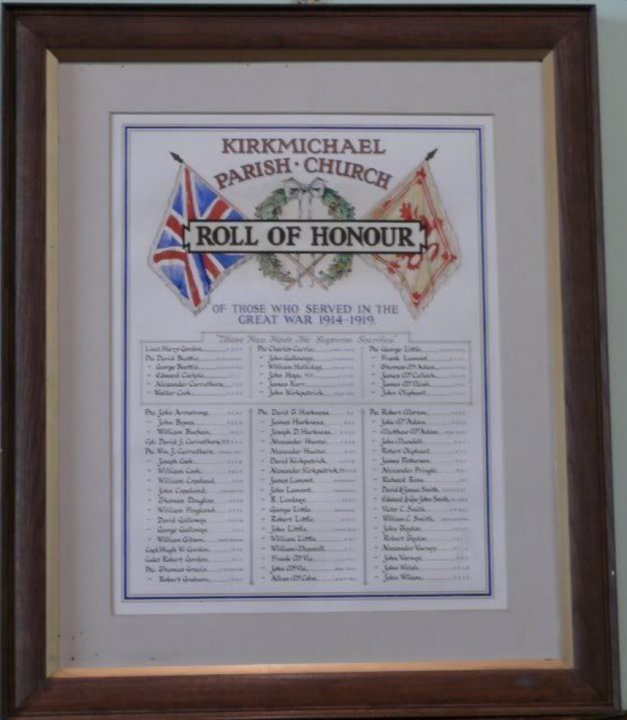 The Kirkmichael Parish Church War Memorial where David and George Beattie are commemorated.

On 28 December 1917, at 39 queen Street, Lochmaben, after Banns according to the Forms of the United Free Church of Scotland, James Beattie, (49), Wood Forester, (Widower) of Nethermill, Kirkmichael, married Mary Jane McGregor, (44), a Farm Worker and Spinster of 39 Queen Street, Lochmaben.