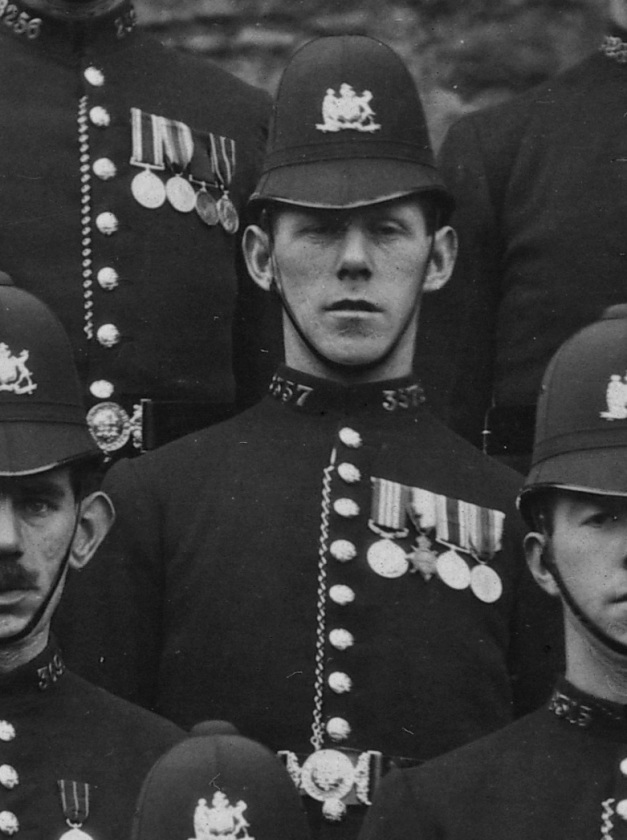 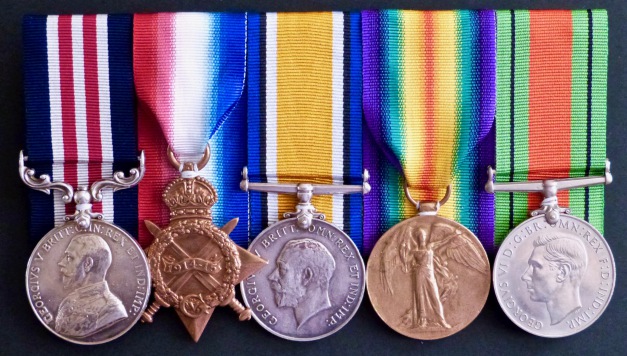 John McGhee Rennie's medals showing the naming on the rim. 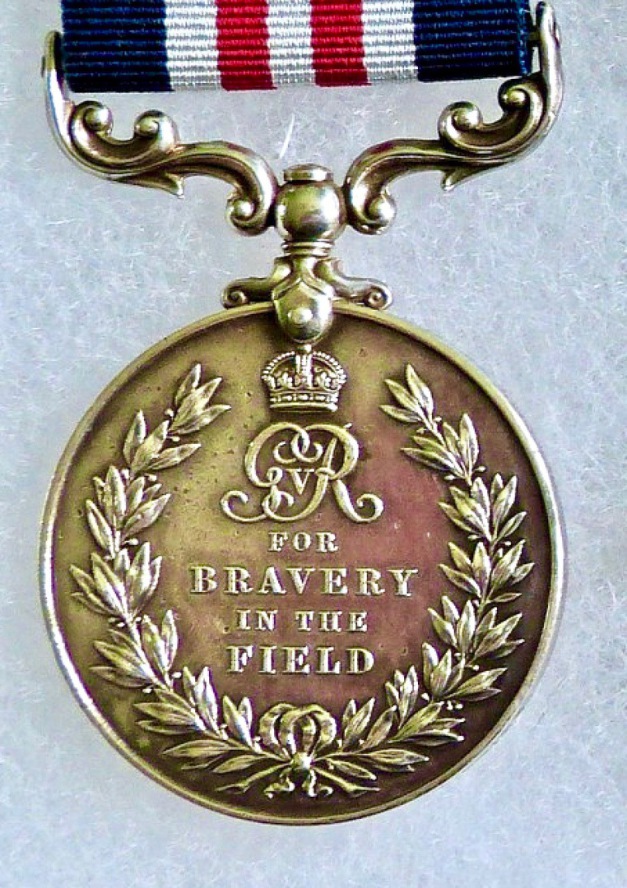 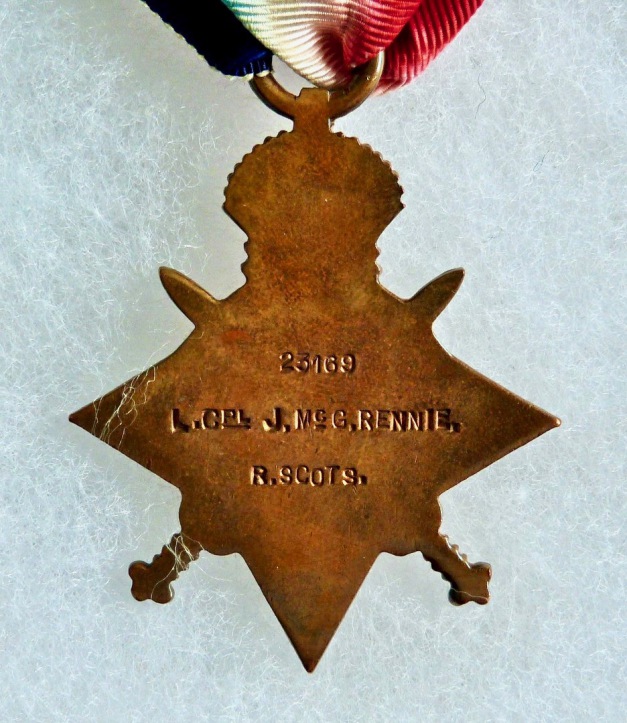 John McGhee Rennie was born in 6 John Street, Aberdeen on 11 June, 1891, twenty minutes after his elder twin brother, Robert Rennie. Their father was James Rennie, a Farm Servant of Bents Farm near Alford and their mother, Jane McGhee, a Domestic Servant of Scotstown near Echt, both in Aberdeenshire.

Although both their parents eventually married, they never married each other.

On 31 October, 1896, at 3 Skene Place, Aberdeen, Jane McGhee, (29), a Domestic servant and Spinster, married John Barron, (26), a Farm Servant. Jane and John Barron brought up Robert Rennie as their son and he was known as Robert Barron.

A year later, on 4 June, 1897, at the Burnett Arms Hotel in Kemnay, James Rennie, (35) a Farm Servant of Wellhouse near Alford, married Maggie Scott, (25), a Domestic servant from Kemnay. James and Maggie Rennie brought up John McGhee Rennie as their son.

He disembarked in France with the 13th Battalion Royal Scots on 2 October, 1915.

His award of the Military Medal (as a Corporal) was published in a Supplement to the London Gazette on Saturday 9 December, 1916 which probably means the action for which it was recognised took place approximately 12 weeks before, in September. A local newspaper that reported the award of the medal stated that he had been wounded in the Somme on 15 September, 1916. That was the day his battalion led the successful assault on the village of Martinpuich in Northern France during the Battle of the Somme.

John McGhee Rennie was promoted to Serjeant and may have spent some time at the Depot in Glencorse Barracks, Penicuik. He was certainly stationed there with the 3rd Battalion in late 1917 when he married Jeannie McInnes. He was discharged on 9 February, 1919.

He rejoined Edinburgh City Police on 11 February, 1919, again as PC 521 D and served with distinction, being commended by the Chief Constable three times. Between 1919 and 1922, he transferred from the ‘West End’ (in that year, still D Division) to ‘Gayfield’ (B Division) as PC 357 B.

He enlisted in 13th (Service) Battalion the Royal Scots as Private 23169 the same day he resigned from Edinburgh City Police.

The 13th (Service) Battalion Royal Scots were formed in Edinburgh in September, 1914 as part of the ‘K2’ group, ‘Kitchener’s New Army’ and after a short period of strenuous training, were sent to the Western Front, landing in France on 15 July, 1915.

By 27 July, 1915, the battalion was in the trenches as part of the 15th (Scottish) Division which fought in the Battle of Loos. The Division later fought in the Somme, the Third Battle of Ypres, Arras and many others.

13th (Service) Battalion The Royal Scots – Life in the Trenches

The War Diary (WD) of the 13th Battalion the Royal Scots records the daily operations of the unit, reinforcements in, transfers out, casualties, killed wounded and missing, (only the Officers are named however, the ‘rank and file’ are simply stated as a number), movements in and out of the trenches, the operations taken part in, the training schemes and anything the writer thought worthy of recording. Awards for Gallantry are often recorded in the WD.

The War Diaries are available on-line from The National Archives (TNA) and are an extremely useful source of information for researchers.

13th (Service) Battalion The Royal Scots – The Battle of the Somme, September, 1916

The following excerpt is a direct quotation taken from Appendix II of the War Diary of the 13th Battalion the Royal Scots and details the operations during the action to capture the village of Martinpuich over 15 – 16 September, 1916.

Unfortunately, the copy of the 13th Royal Scots War Diary available online from TNA has the whole month of September, 1916 missing.

I believe John McGhee Rennie, by now a Corporal, took part in this action and it may have been during this that he was awarded the Military Medal (MM)?

His award of the MM was published in the Supplement to the London Gazette of Saturday 9 December, 1916. Allowing for the time-lag between the action and the award of roughly 12 weeks, it is highly likely that it was for the action at Martinpuich that John McGhee Rennie was recognised.

Among the many pages of awards and decorations in the Supplement, page 12041 records that “His majesty the King has been graciously pleased to award the Military Medal for bravery in the Field to the undermentioned Non-commissioned officers and men:-

His award was also acknowledged in the ‘Aberdeen Daily Journal’ of Thursday January 11th, 1917 under “Tullynessle and Forbes” local news.

I am hoping that the copy of the 13th Battalion War Diary held at the Royal Scots Museum in Edinburgh Castle is complete with the month of September included so that I confirm the action in which the award of the MM was made (25 November, 2016).

Register of Marriages in the District of St Andrew in the Burgh of Edinburgh, 1917

This records that PC 521 D John Rennie was “Re-appointed to the force with 3 years, 354 days Army Service and former Police Service counting towards pension. (Placed in 3rd Class (47/-)”

This had the effect of him being brought up to his correct pay rate and pensionable service that he would have been entitled to had he not volunteered for the Army.

The card also records the theatre of War first served in as “(1) France”. It also confirms that he disembarked in France on 2 October, 1915.

John Rennie, by now PC 357 B stationed at Gayfield Square, Edinburgh, was “Specially Commended” this day for “for courageous conduct in stopping a runaway horse.”

John Rennie, PC 357 B was “Commended” this day for “Tact and vigilance displayed in securing the arrest of two shop breakers.”

Register of Deaths in the District of East Peterculter in the County of Aberdeen, 1924

On 7 March, 1924, at Gardeners Cottage, Drumgarth, Aberdeenshire, Margaret Rennie, (60), married to James Rennie, Farmer, died. Her parents were listed as James Scott, a Quarry Worker and Isabella Copland or Scott, both deceased.

Margaret’s death was registered by her son-in-law, James Morrison of the Gardener’s Cottage, Drumgarth.

Listed living as a tenant of 13 Dean Park Crescent, Edinburgh in that year was “John McGhee Rennie, Police Constable”.

The address was clearly approved as suitable for police officers to reside there since four of the flats were so occupied.

John Rennie, PC 357 B was “Commended” this day for “vigilance and promptitude displayed for securing the arrest of a man suspected of house breaking.”

Still listed living as a tenant of 13 Dean Park Crescent, Edinburgh in that year was “John McGhee Rennie, Police Constable”.

On this date, John McGhee Rennie retired from Edinburgh City Police. He is entitled to a Defence Medal for his War Service. He was also awarded 5 War Service chevrons, as that fact is recorded in his personnel record.

John McGhee Rennie, (70), died on 19 April, 1962 in Edinburgh Royal Infirmary as a result of a head injury sustained in a collision between two motor vehicles. His usual address was in Gladsmuir in East Lothian.