James Riach McKenzie was born in Ardclach in the County of Nairn in 1882.

He was a Draper before he joined the City of Glasgow Police in January 1901 and was posted to ‘B’ or Western Division.

Despite two early minor brushes with the Discipline Code in 1902, he quickly settled down and proved to be an industrious officer who between 1904 and 1913, was awarded 8 commendations for crime arrests.

He passed his Sergeant’s Certificate in May 1909 and his Inspector’s in August 1913.

In 1902 he married Mary Ann Magill in Glasgow.

He was awarded the King Edward VII Police (Scotland) Medal in 1903.

On 9 November 1915 he resigned and joined the Argyll and Sutherland Highlanders (The Argylls) (See picture below)..

He became Private S/14099 and was posted to the 12th Btn Argylls in Salonika (Thessaloniki) in Macedonia, Northern Greece near the border with Bulgaria and Serbia.

The regiment was part of a Division whose principal role (according to the Regimental War Diary) was “to prevent the enemy around Kristali from withdrawing troops to reinforce those in Monastir”.

The General Officer Commanding 26 Division wrote to the Adjutant of 12th Btn A & SH on 25 October 1916 and said “A study of recent patrol reports shows that the opposition met with is tending to increase and the Divisional Commander considers that this is the best proof of success in the somewhat thankless, though important task allocated to you”. 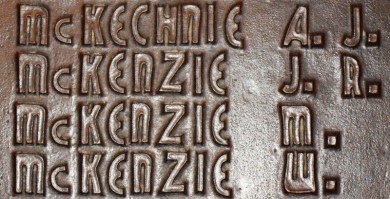 Serjeant James Riach McKenzie “Died of Disease” aboard His Majesty’s Australian Transport Wandilla, a Hospital Ship, somewhere in the Mediterranean on 8 November 1916, almost one year to the day after he joined up.

Page No. 362, of “The Return of Warrant Officers, Non-Commissioned Officers and Men of the 12th Btn A & SH” in which his death is listed has 15 names.

Of the total, 5 were ‘Killed in action’, 2 ‘Died in the Field’, 3 ‘Died of Wounds’, 2 ‘Died of Dysentery’, 1 Died of Malaria’ and the last 2 ‘Died of Disease’. It is too small a sample to judge accurately but it does indicate the possibility that ‘disease’ was resulting in a third of the casualties in that theatre.

I have checked the 12th Btn Regimental War Diary for the two months before his death but can find no record of a Non Commissioned Officer (NCO) being wounded. The diary is of its time and only the officers are mentioned by name. The ‘other ranks’ and ‘NCOs’ are simply recorded by numbers killed or wounded.

His MIC confirms his rank, number and his entitlement to the British War Medal and the Victory Medal.

A soldier of the Argyll & Sutherland Highlanders, Private James McEwan