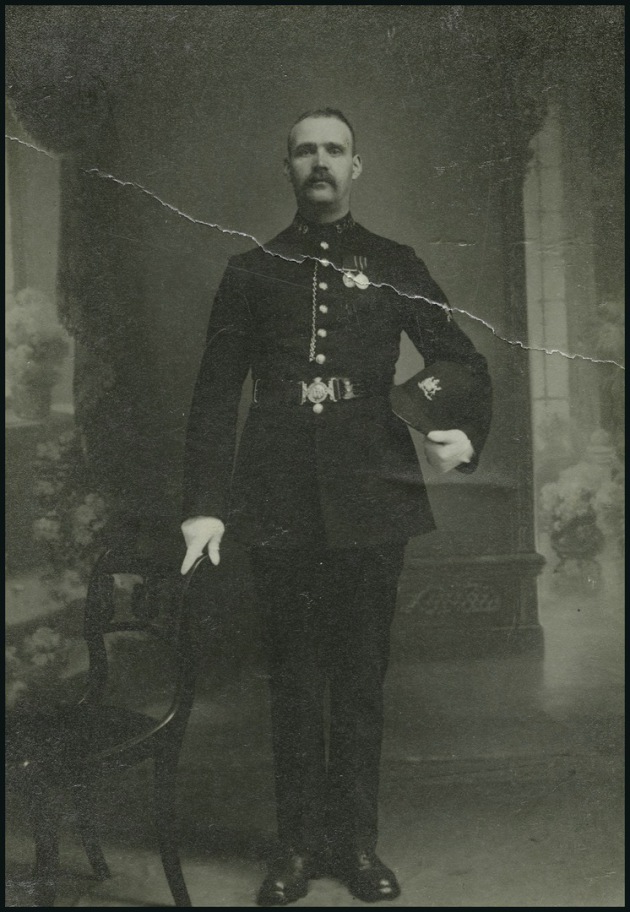 PC 549 D Thomas Melvin, Edinburgh City Police, a contemporary of Dugald Shaw at the West End Police Station who was killed in action serving as a Lance-corporal with the Cameron Highlanders.

Dugald Shaw was born on 26 September 1884 at Inverlussa on the East coast of the Island of Jura in the County of Argyll.

His father was Duncan Shaw, a Boatman and his mother, Mary McLean or Shaw. His parents were married on 17 December 1868 in Jura.

He served two years in Argyll County Police at Inveraray and Colintraive before joining Edinburgh City Police on 13 November 1907 in D Division (the West End).

Dugald Shaw was one of the 598 Edinburgh City Police officers to be awarded the King George V Coronation (Scottish Police) Medal 1911.

On 15 October 1913, aged 29, he married Elizabeth McNab, (29), at the Melville Hotel, Edinburgh after Banns according to the Forms of the Church of Scotland.

Dugald Shaw was a Sergeant in The Lovat Scouts, part of the Territorial Force and joined up in 1915. That event is recorded in the Roll of Edinburgh Corporation employees who enlisted during the War.

He was Commissioned as a 2nd Lieutenant in the 1/5 Seaforth Highlanders on 26 June 1917.

The Medal Index Card (MIC) for 2/Lt. Shaw confirms his number and rank in the Lovat Scouts, 5666, Acting Sergeant and his rank and number in the Seaforths, 2nd Lieutenant, 125892.

Elizabeth McNab or Shaw died aged 80 in Edinburgh in 1964.

(Please note that I only became aware of the existence of PC Dugald Shaw when his Great Grandson, T. Shaw-Young, contacted the website.

I am grateful to him for some of the information above. I also hope to include a photograph in the near future too.)