Commander of the British Empire (1943)

William Booth Rennie (WBR) Morren was born on 3 July 1890, the son of John Morren, then an officer in Aberdeen City Police and his wife, Agnes Smith or Morren.

His father was an officer who steadily worked his way through the ranks until 1902 when he was appointed Chief Constable of Hawick. What follows is a chronological list of William Booth Rennie’s career from being a Law Clerk in Jedburgh, joining Edinburgh City Police, enlisting in the Royal Scots through World War 1, working through the ranks of Edinburgh City Police and becoming Chief Constable in 1935 and the subsequent honours until his retiral in 1955. 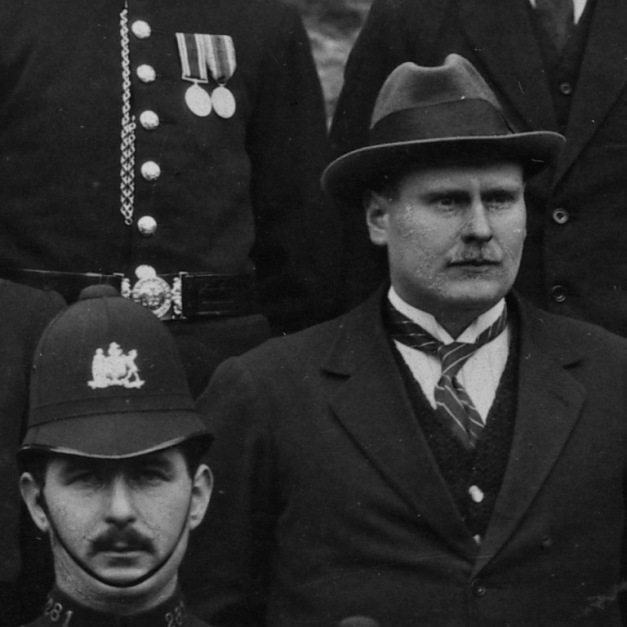 William Morren just after he left the Army. He is then a Detective Sergeant in B Division (Gayfield Square) in 1922. 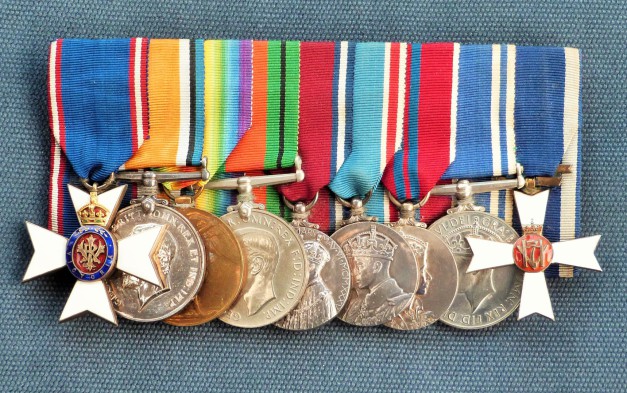 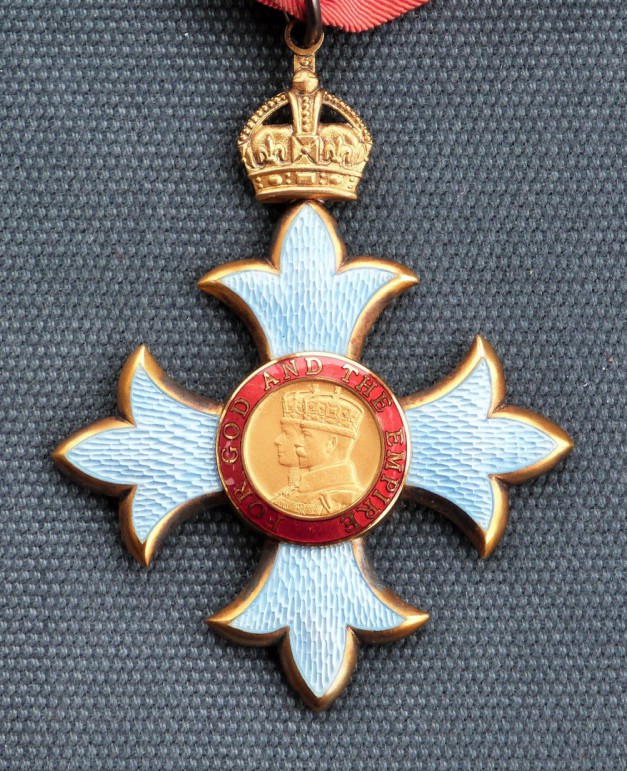 Neck Badge insignia of Commander of the British Empire (CBE). William Morren was awarded this honour in 1943 (see below).

John Morren had been appointed Chief Constable of Hawick Burgh Police in 1902 and the family were living  in Jedburgh. On leaving school, William entered the Law Office of Messrs. Thomas Purdom & Sons, Solicitors and Bankers, Hawick where he remained for three and a half years. While in that office, he had the opportunity of gaining a general knowledge of legal affairs, and also municipal and court work.  He transferred to the office of Mr Sydney Hilson, Procurator Fiscal  for the Counties of Roxburgh and Jedburgh at Hawick where he obtained experience in in criminal procedure and in Sheriff Court work. During this time, he was in daily contact with police and learned a good deal of the work and routine of a county police force.

The following were listed living at 34 High Street, Jedburgh in the County of Roxburgh on the night of the Census of Scotland, 1911:

The records of Edinburgh City Police (ECP) show that William Booth Rennie Morren, (21), a Law Clerk, was appointed to the force on 28 November 1911. He was posted to the Criminal Investigation Department (CID) at the Headquarters in the High Street gaining valuable experience in crime detection, finger printing, photography and keeping of records. He was also attached to the Chief Constable’s Office gaining experience in the preparation of statistics and the compilation of Government and other returns.

Immediately after the outbreak of the war, Morren was posted to the Aliens Department and assisted in the work of rounding up and interning enemy aliens. At his own request in My 1915, he was released for service  in the fighting forces. 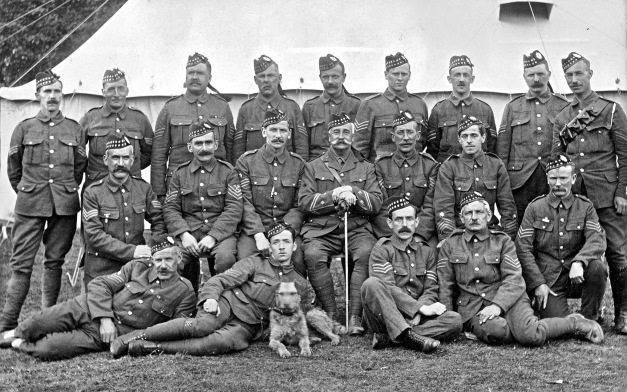 Sergeant Mess, 6th Battalion Royal Scots (Circa 1915, probably Edinburgh or Peebles. Morren (4th from R, back row), was promoted to Sergeant nine days after enlistment and commissioned as a 2nd Lieutenant just under one month later. The man on his left 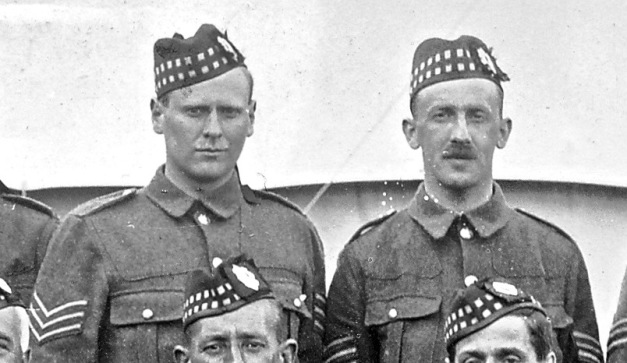 He was attested as a Private, number 3194 in the 6th Battalion the Royal Scots at Gilmore Place, Edinburgh on 20 May 1915. William Morren’s ECP record records that on 25 May 1915, he  “Resigned for the purpose of joining the Army.” His Army record shows that he was appointed ‘Acting Sergeant’ on 29 May 1915.

Having been recommended for a Commission, he was discharged as an Acting Sergeant from 6th Royal Scots on 23 June 1915 on his appointment as a 2nd Lieutenant (Lt.) in 6th Battalion Royal Scots. 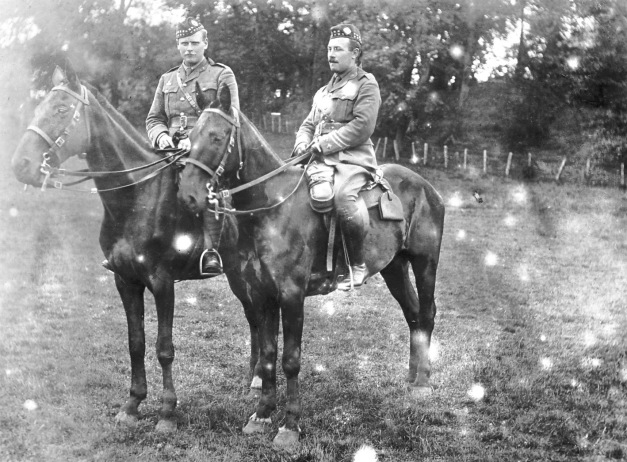 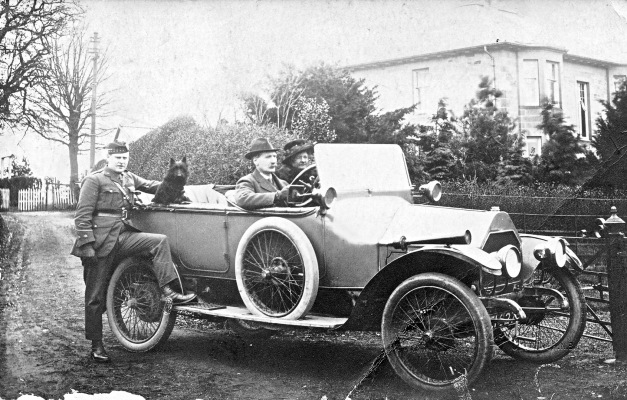 2nd Lieutenant William Morren in 1915 with his father and mother, John and Agnes Morren.

Register of Marriages in the District of St Giles in the City of Edinburgh, 1916 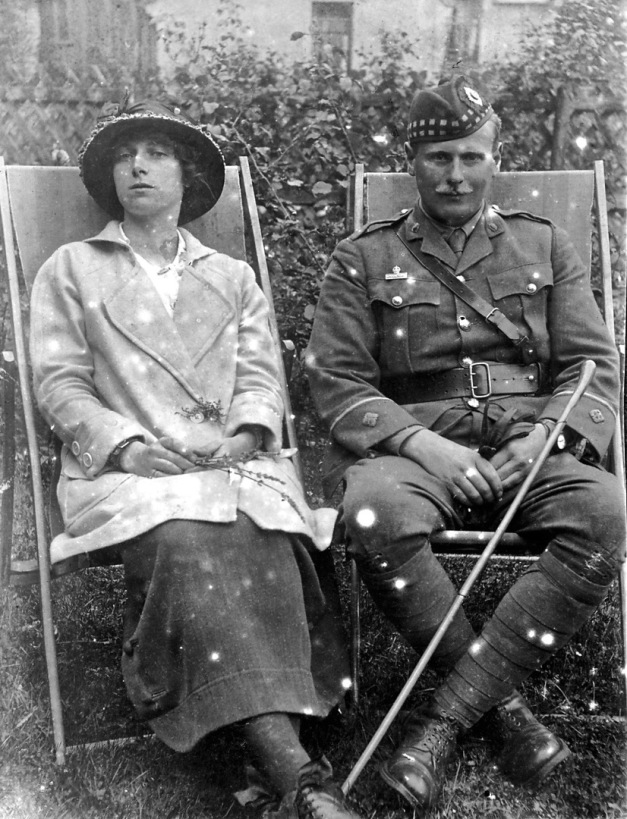 William and Grace Falconer or Morren in 1916.

Active Service in France and Belgium

He was transferred to the 9th (Highlanders) Battalion Royal Scots (RS) and joined them in France on 3 August 1916. The 9th Battalion, although a Lowland Regiment, was a ‘kilted’ unit and he can be seen in that uniform in the pictures below.

The 9th Battalion was part of the Lothian Coast Defence Brigade when it deployed to France in late February 1915 joining the 27th Division with whom it took part in the Second Battle of Ypres, alongside the 1st Battalion, losing over 200 casualties. The Battalion transferred to the 5th Division in late November 1915 and then to 154 Brigade of 51st Highland Division on 1 March 1916 remaining with them until February 1918.

Their baptism of fire with the Division came during the First Battle of the Somme with the attack on High Wood on 23 July 1916. Their next major involvement was the Battle of Arras in April-May 1917 where the 9th RS on 9 April, were initially the right assault battalion tasked to capture the first line of German trenches at the south end of Vimy Ridge. They achieved their objective after a stiff fight. Later they were heavily involved in the Scarpe and Roeux battles. Before leaving the 51st Division the Battalion took part in Third Battle of Ypres and the operations at Bourlou Wood and Cambrai. 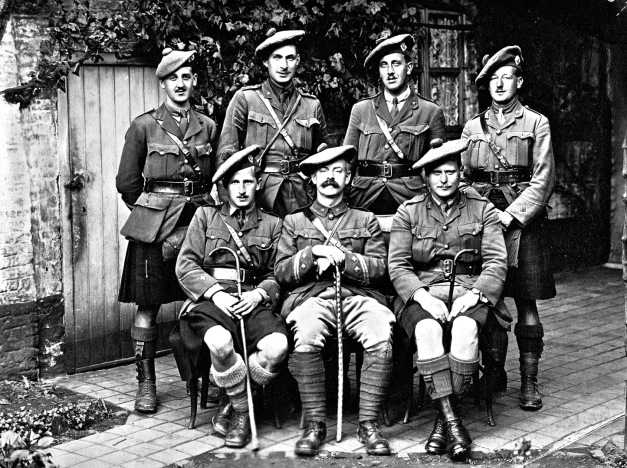 On 6 February 1918, 9th RS, along with 5th Gordon Highlanders and 8th Argyll and Sutherland Highlanders, formed 183 Brigade of 61 Division. With them they fought to first stem, then halt, the German spring offensive. Finally the Battalion moved, on 1 June, to 15 (Scottish) Division for the advance to victory, ending the War at Tournai in Belgium.

The by now, Lieutenant William Morren, would have seen action at some of these battles although he was invalided back to the United Kingdom on two occasions between 1916 and 1918.

William Morren was discharged from the 6th Battalion the Royal Scots on 17 December 1918. He was awarded the British War Medal and the Victory Medal for his service in World War 1 and applied for them on 11 July 1922 when his address was 72 Falcon Avenue, Edinburgh. 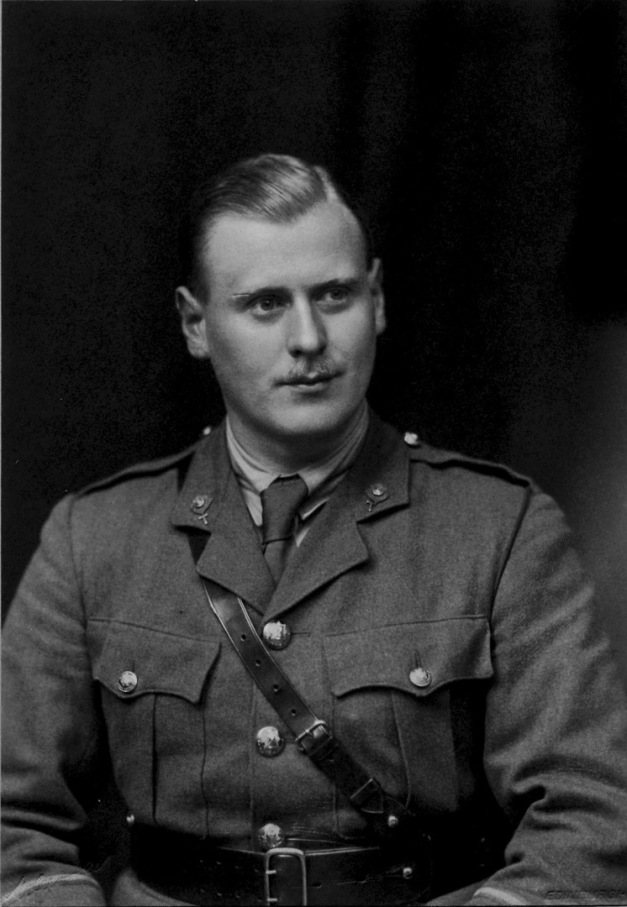 On the 14 January 1919, the ECP Weekly Record shows that WBR Morren was “Re-appointed with three years and 206 days Army Service and former Police Service counting towards pension and placed in 2nd Class, 1st Grade Constable @ 50/- per week.”

The ECP weekly Record of 11 March 1919 shows that William Morren was promoted to 5th Class Inspector on 56/- per week.

The ECP weekly Record of 17 August 1922 shows that William Morren was promoted to 5th Class Detective Sergeant on £320.0.0 per annum.

The ECP weekly Record of 30 November 1926 shows that William Morren was promoted to 5th Class Lieutenant on £375.0.0 per annum.

The ECP weekly Record of 24 July 1928 shows that William Morren was promoted to 5th Class Superintendent on £450.0.0 per annum. 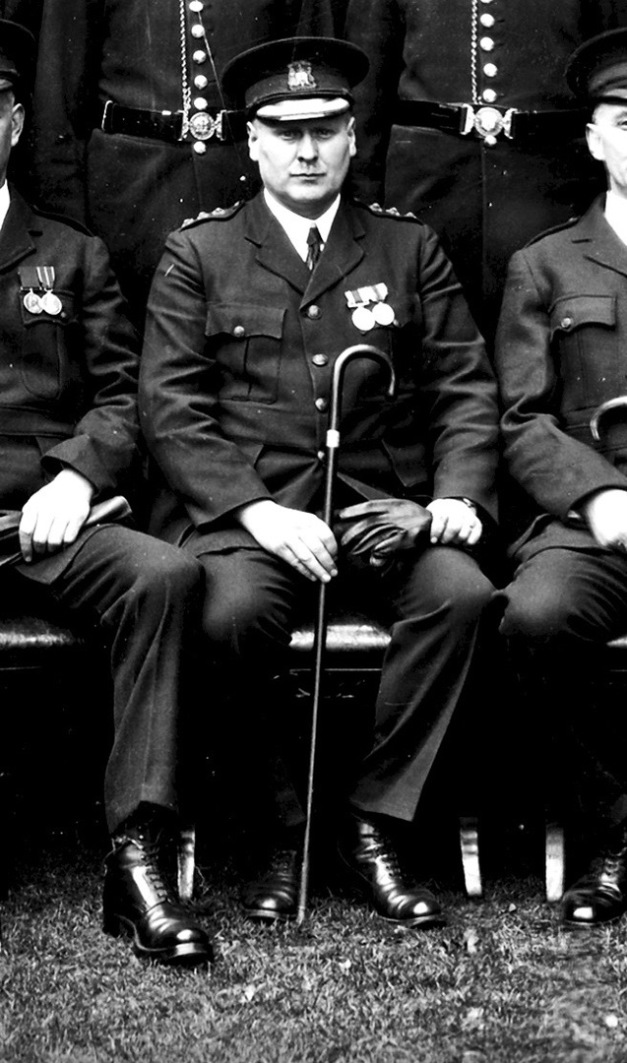 Superintendent William B. R. Morren, A Division in 1929 in East Market Street, Edinburgh. Notice the three 'pips'. rank insignia for a Superintendent!

The Edinburgh Evening News of 13 September 1932 reported that police officers formed a guard of honour outside St Giles Cathedral at the wedding of Miss Katherine Cecile Ross, daughter of Chief Constable and Mrs Roderick Ross, of Lipton House, Joppa and Mr David Lowe, the son of Provost Lowe of Musselburgh.

The Aberdeen Press & Journal edition of Wednesday 30 November 1932 reported that a Sub-committee of the City of Aberdeen Watching Committee had selected a short leet of four names to be considered for the vacancy of Chief Constable of the City force. Superintendent William B. R. Morren of ECP was one of the candidates. He was not successful on this occasion and the job went to James McConnach, the local candidate.

The name of Superintendent William B. R. Morren, Edinburgh City Police appears on the medal roll of the King George V Jubilee Medal.

That days’ edition, under the heading “Chief Constableship – Edinburgh Recommendation – Superintendent Morren”,reported that:

“Edinburgh Lord Provost’s Committee yesterday decided to make a unanimous recommendation to the Town Council to appoint Superintendent W. B. R. Morren of Edinburgh City Police, as Chief Constable of Edinburgh in succession to Mr Roderick Ross who is retiring…”

The ECP Weekly Record of 2 July 1935 recorded that Chief Constable Roderick Ross had retired on 30 June that year. 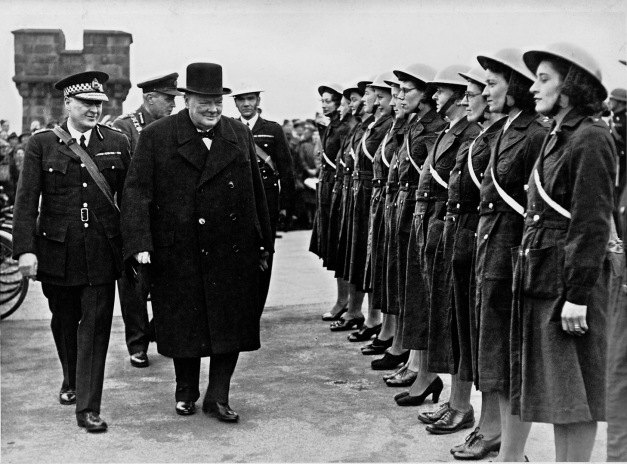 Chief Constable Morren with Winston Churchill inspecting members of the Civil Defence at Edinburgh Castle between 1939 - 1945.

The edition of that date reported that on 11 July 1937, William Booth Rennie Morren Esquire, had been appointed to Membership, Fourth Class, of the Royal Victorian Order. These awards are usually made for important or personal services to the Sovereign or Royal Family.

That days’ edition reported that:

Mr William B. R. Morren, MVO., Chief Constable, Edinburgh who has received a C.B.E. (Commander of the British Empire, is an Aberdonian and after legal training and police experience in the borders, joined the police force in Edinburgh as a Constable in 1911. After service in the last war with the 6th Royal Scots, in which he rose to commissioned rank and was in France and Belgium, he returned to the Edinburgh Police, and after various promotions he was appointed Chief in 1935. He received the M.V.O. (Member of the Victorian Order) from King George VI on his first visit to Edinburgh after his Coronation in 1937. At various times, Chief Constable Morren has been attached to members of the Royal Family and Cabinet Ministers on their visits to the city.”

The Defence Medal was instituted in 1945 for Service personnel with three years’ service at home and in some other defined circumstances. Members of the Police, Special Constabulary, Home Guard, Civil Defence, National Fire Service and other civilian units also qualified for this medal. Chief Constable Morren qualified in terms of his police and Civil Defence work between 1939 and 1945.

Under the heading, ‘Scottish District News – Edinburgh and South East’, the paper reported the following on 14 August 1947:

“CHIEF CONSTABLE HONOURED – The Norwegian Liberty Cross has been awarded to Chief Constable W. B. R. Morren by His Majesty King Haakon VII for “Distinguished services rendered in the cause of Norway during the war”. After the fall of Norway a large number of Norwegians came to Scotland and all those who landed along the East Coast were taken to Edinburgh where they were looked after by the police before being transferred to London. Mr Morren was Co-ordinating Officer for the Firth of Forth and Tay Protected Areas during the war.” 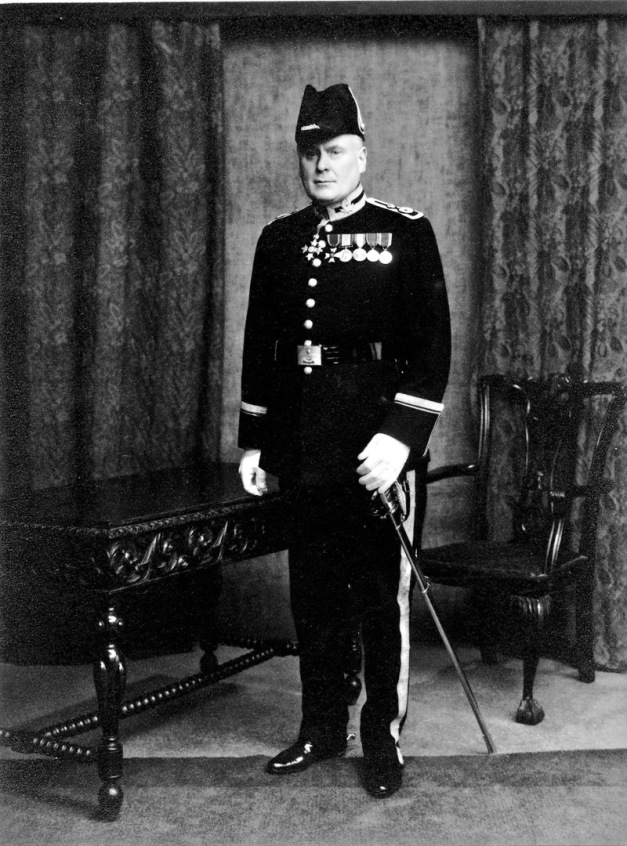 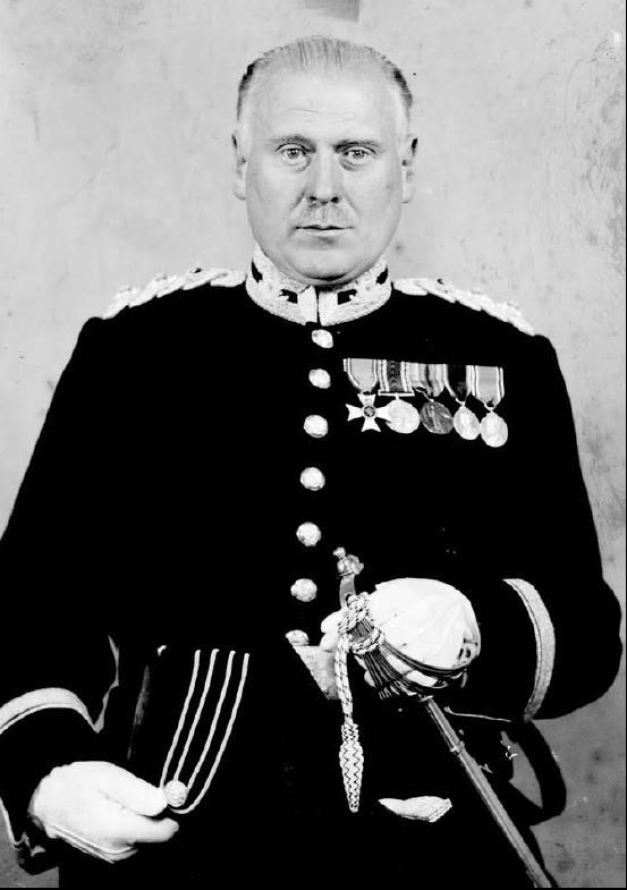 The Police Long Service and Good Conduct Medal was instituted on 14 June 1951 by King George VI ‘for Exemplary Service’ of regular officers of all United Kingdom Police forces who had completed 22 years’ service. Chief Constable Warren had completed 22 years’ service in 1933 so he qualified immediately and was among the first to be awarded the new medal. King George VI died on 6th February 1952 so his is among the relatively few with the effigy of King George VI on the obverse.

Supplement to the London Gazette 5 June 1952

Included in the list of gentlemen on whom Her Majesty the Queen was to confer the honour of Knighthood was William Booth Rennie Morren Esquire, CBE, MVO, Chief Constable of Edinburgh City Police.

Page 3748 of the edition of that date reported that:

“The QUEEN was pleased on Tuesday the 8th instant, at Buckingham Palace, to confer the honour of Knighthood upon the undermentioned gentlemen:-“

Register of Deaths in the District of Haymarket in the City of Edinburgh, 1972