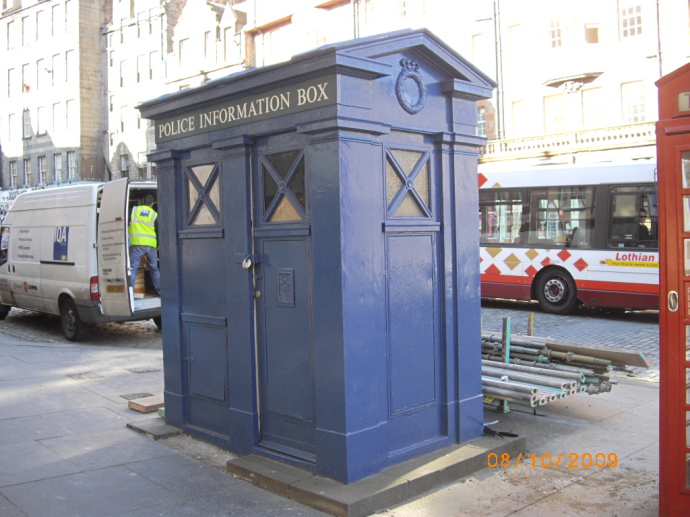 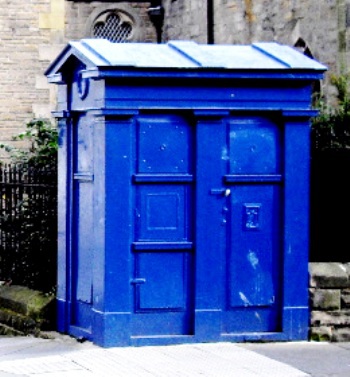 Box 3 A Cranston Street at the Canongate in 2012

The Police Box System of Edinburgh City Police introduced in 1933:

The three sheets below show the original positions of the Police Boxes and Pillars introduced in 1933.

The lists also show the Fixed Traffic Duty Points introduced at the same time. I remember there were still Fixed Points Teams in Princes Street in the early 1970s.

Over the years the numbers of the boxes changed and what I remember from the early 1970s of A Division bears no resemblance to the numbers on these lists.

I think the list below is correct for the 1st and 2nd Sections of ‘A’ Division in 1974 but I am happy to be corrected.

Please feel free to contact me with additions or corrections to any of  the information on Police Boxes.

A Division Police Boxes in 1933 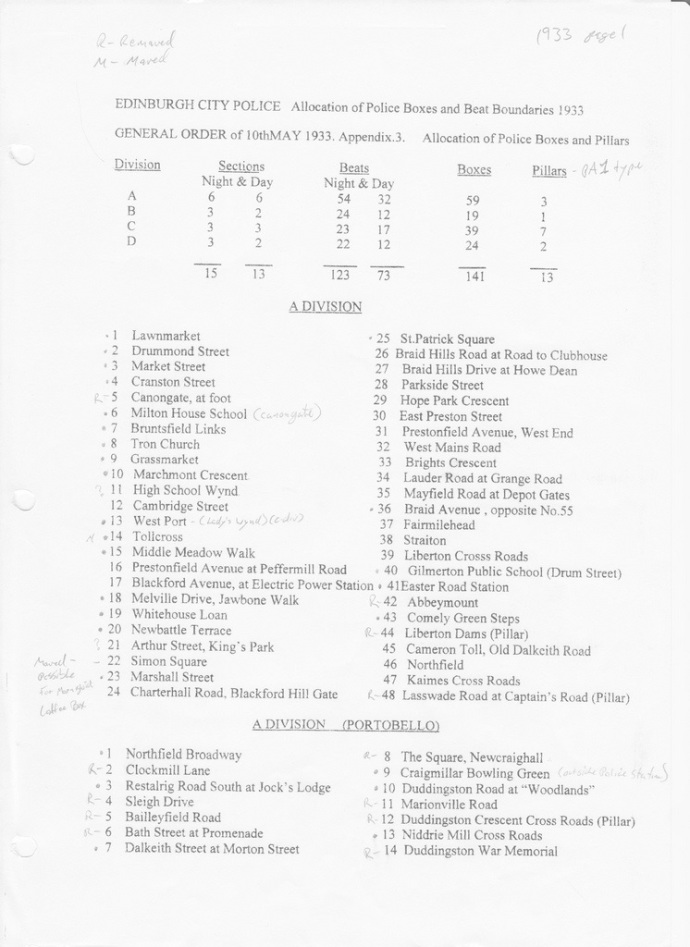 List of A Division Edinburgh City Police Boxes in 1933 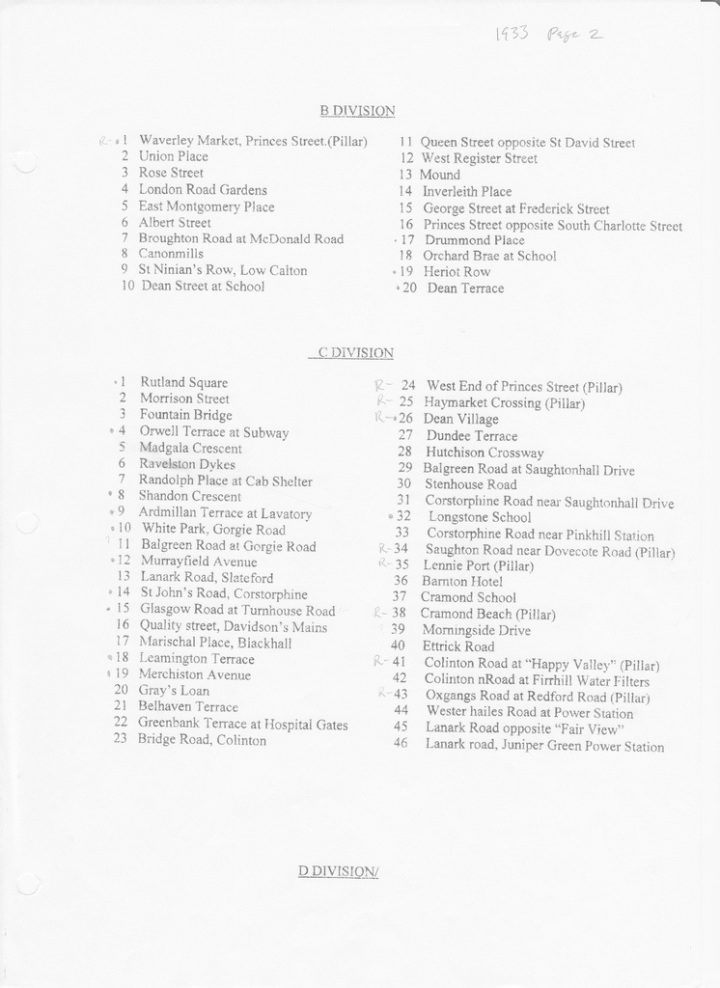 List of B and C Division Police Boxes in 1933 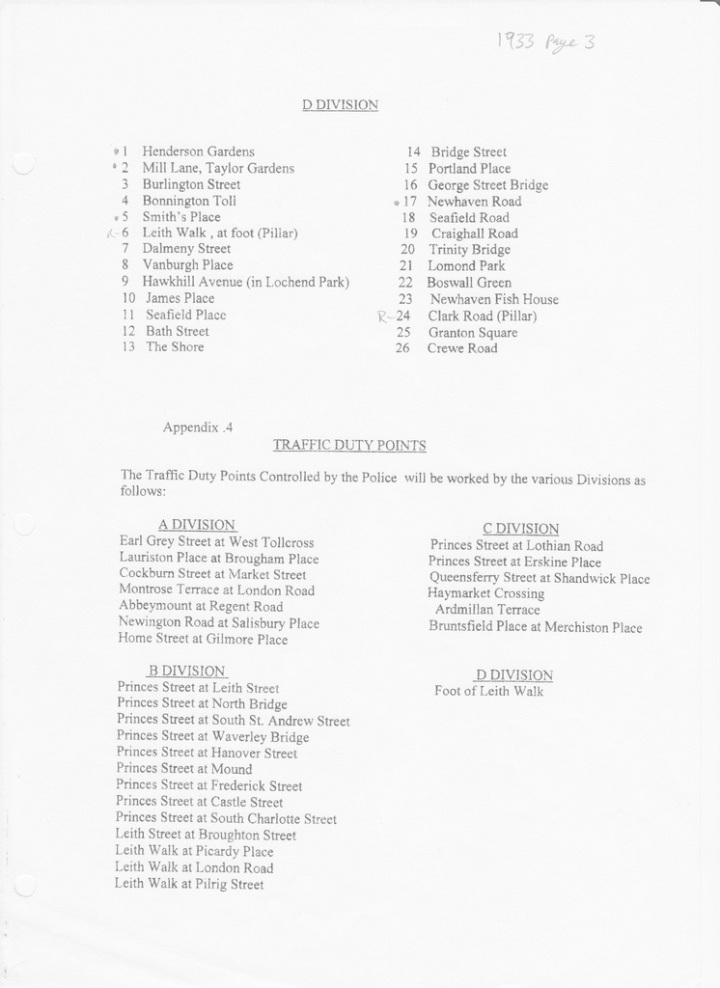 Box 2 A formerly Tron Square above the Public Toilets, now at High Street opposite Cockburn Street.

Box 3 A Cranston Street at the junction with the Canongate in 2016. 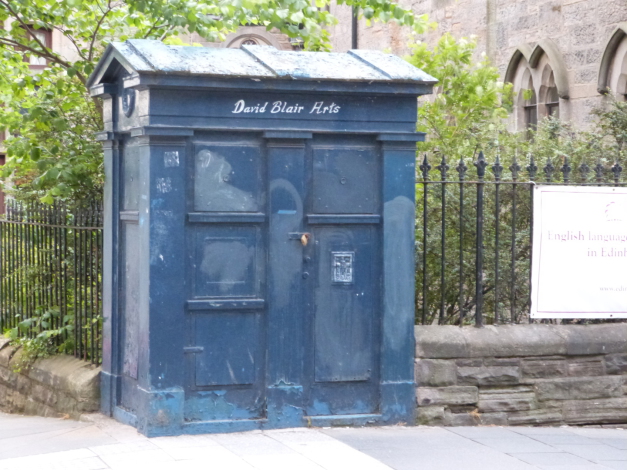 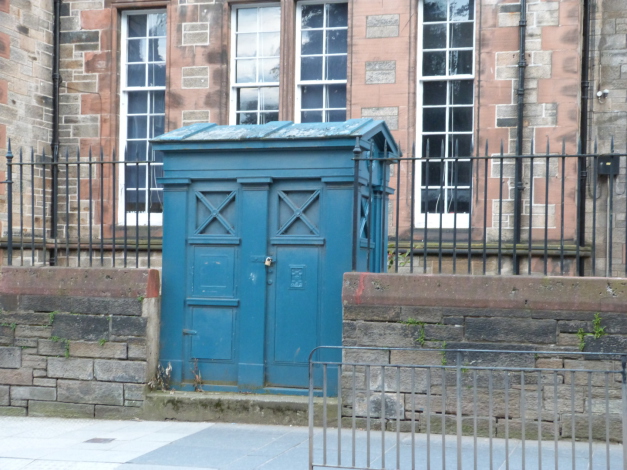 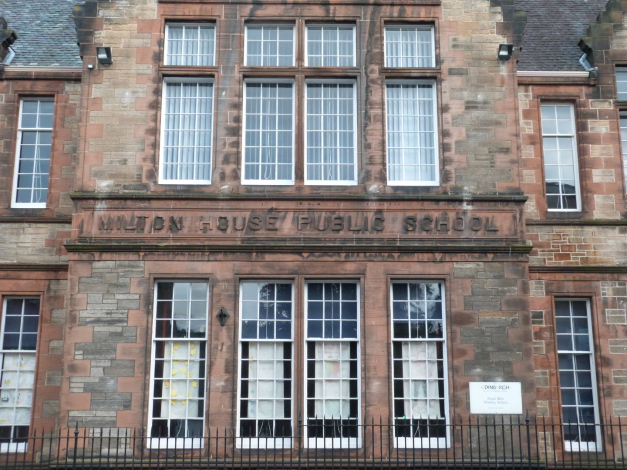 Milton House Public School. The Police Box was set into the school fence. 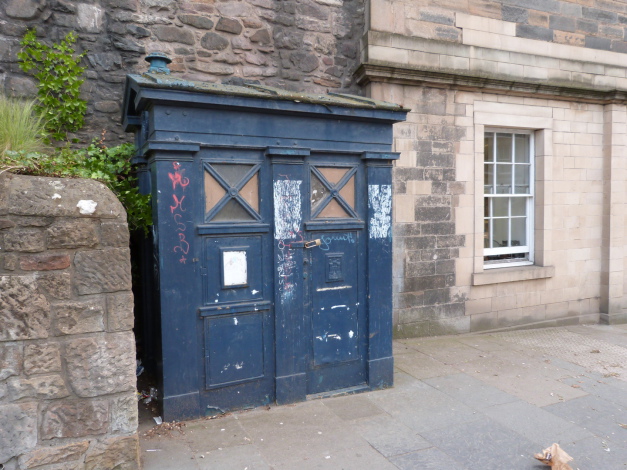 The following link https://www.buildingsatrisk.org.uk/details/917183 will take you to a Register for Scotland of Buildings at Risk, one of which is the former Box 5A now at the Flodden Wall.

The text confirms that this box was moved from its original position at the bottom the steps in High School Yards, in 2014. 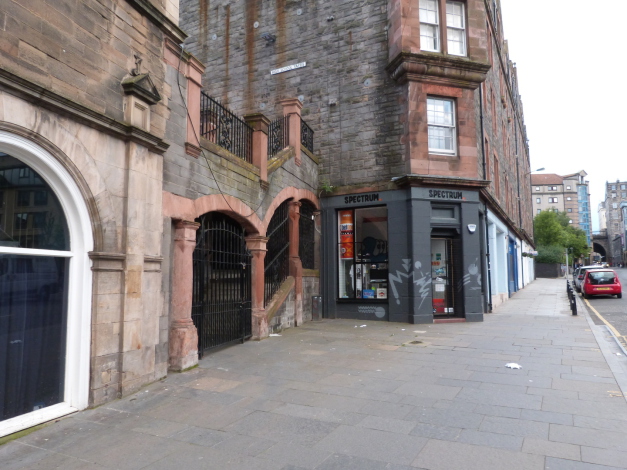 The original location of Box 5 A at the bottom of High School Yards.The view is looking west along the Cowgate towards the Grassmarket. Immediately to the right (off picture) is St Patrick's RC Church from where Hibernian Football Club sprang! 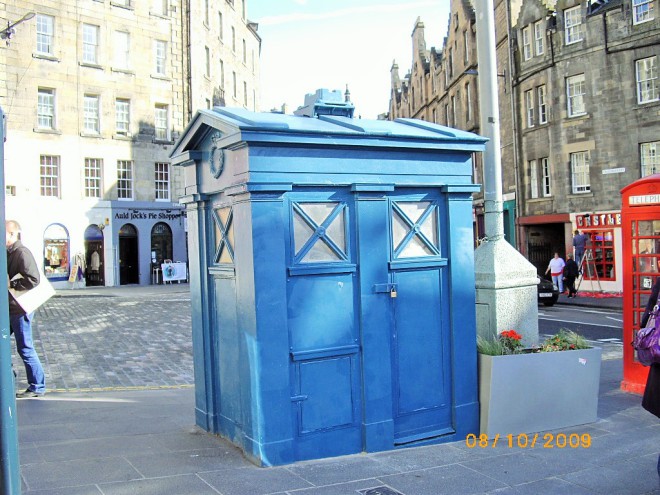 Box 6 A The Grassmarket in 2009. In the 1970s, this box opened towards the direction of the Cowgate and was above a public toilet. The building to the left was the Grassmarket (possibly Greyfriars?) Hotel and the extreme right was 75 Grassmarket, both Com

In the 1970s there were several 'Common Lodging Houses' either in, or very near the Grassmarket.

Within the immediate vicinity of the box were the Grassmarket (possibly Greyfriars?) Hotel and 75 Grassmarket, both male facilities.
The Salvation Army ran a Women's Hostel at the West Port at the west end of the Grassmarket. They also ran a male hostel at the east end of the Cowgate at the junction with the Pleasance.
In between the Pleasance and the Grassmarket, the Church of Scotland had several hostels for men and women along the Cowgate.
The Salvation Army also had a hostel in Merchant Street, just off Candlemaker's Row.
Quite a different area from then to now. Earlier this year, (2018), I read that Grassmarket residents were complaining of the number of properties let out as 'AIR bed and breakfasts' etc. 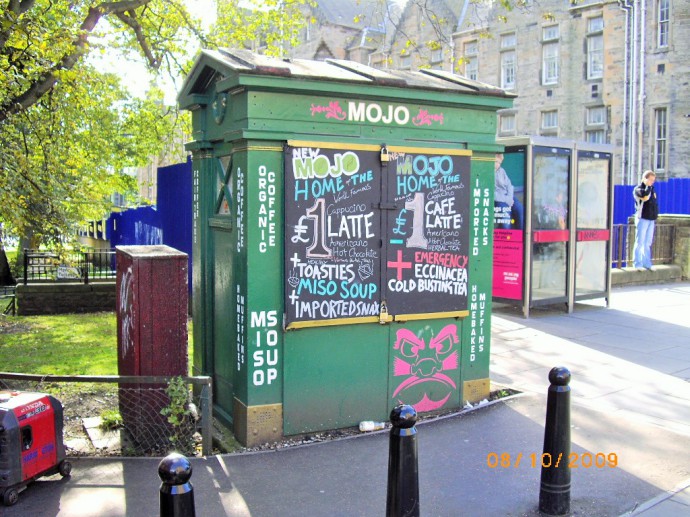 'Re-cycled' Box 7 A Lauriston Place in 2009. This box covered the old Edinburgh Royal Infirmary (ERI) and the 7 Beat officer was in the Accident & Emergency Department several times a shift, day or night on enquiries from other divisions and forces.

Box 9 A Richmond Lane at the junction with Gilmour Street,  just off St Leonard's Street/Pleasance. No longer there in 2016. 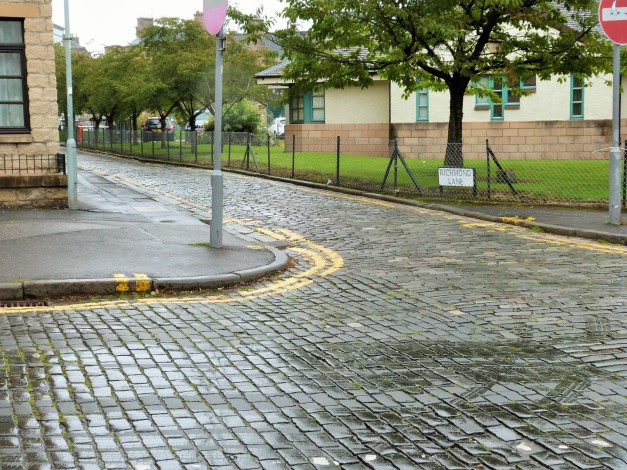 I think the box was where the corner of the building now is? If you know better, please get in touch and let me know. Thank you. 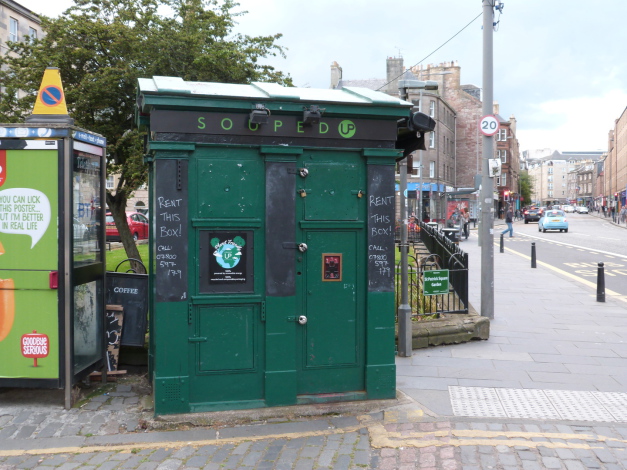 Box 10 A St Patrick Square in 2016. the view is down Clerk Street towards Nicholson Street and 'The Bridges'.

Box 11 A Parkside Street at St Leonard's Coal Depot. No longer there in 2016. 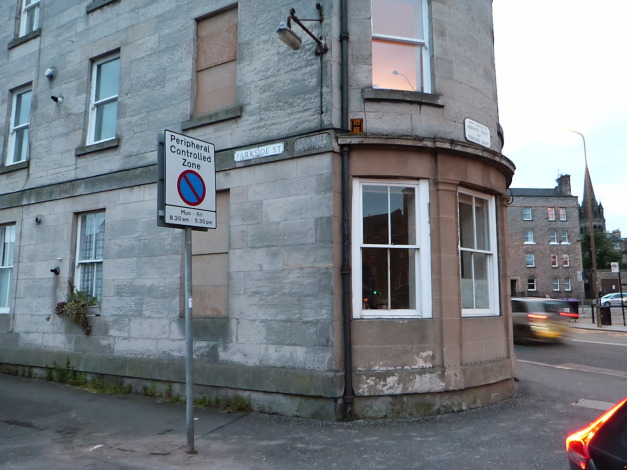 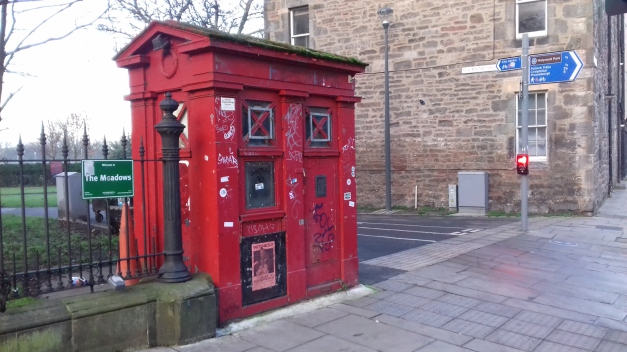 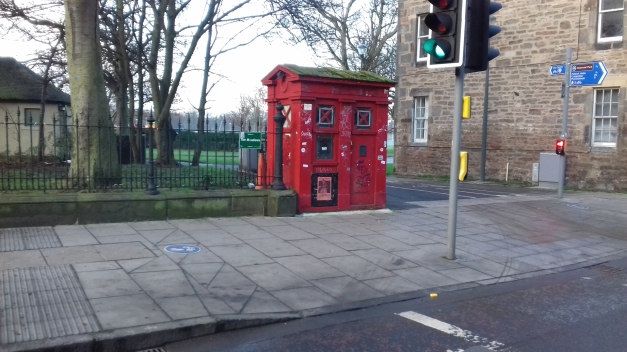 Inside a typical Edinburgh Police Box 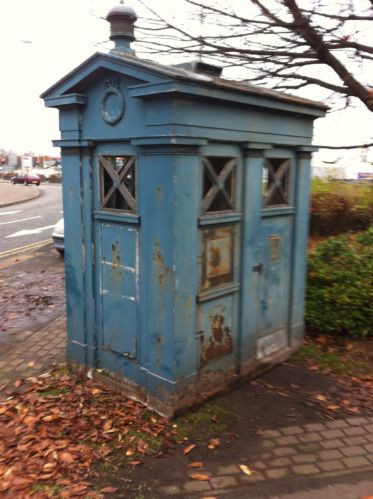 A typical Edinburgh City Police Box (After years of neglect!) 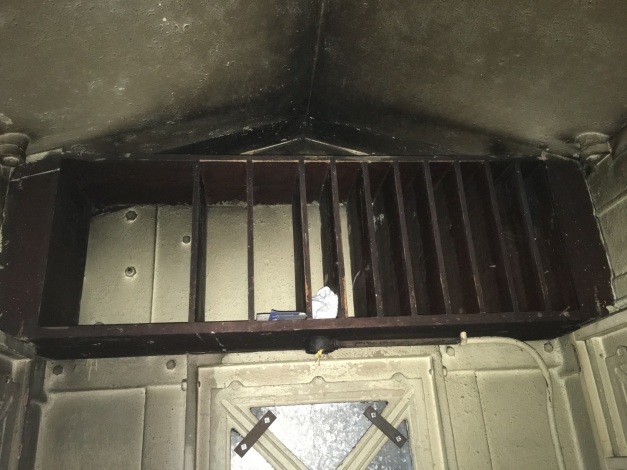 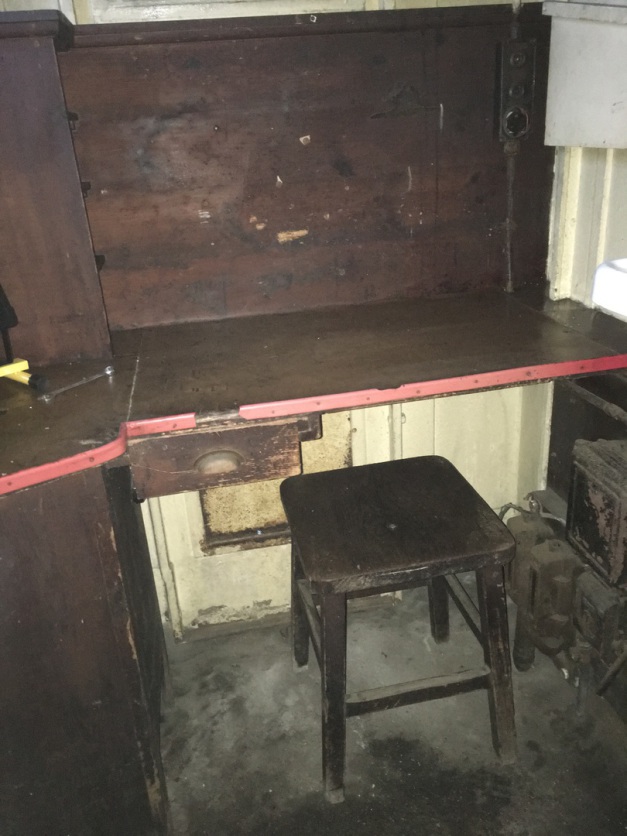 Desk & Drawer. The socket for the kettle can be seen on the upper right. The 'Beat Journal' sat on the desk and the 'Beat Man' (until 1975) made an entry every time he left the box to patrol. The telephone was on the corner to the left side of the desk.

To the left of the desk above the telephone was a list of the Beat Patrols.

Each 'Turn' had a list of streets in the order to which they were to be patrolled. The 'Turns' could be worked in random order and reversed to vary the route so that if being observed by villains, the 'Beat Man's' route could not be predicted.

After the introduction of personal radios in the 1960s, the 'Turns' became obsolete but they were still being used up to the late 1970s.

Section Sergeants and the Shift Inspector would come to the box and check which 'Turn' the Beat Man was on. Then dependent on the time of entry, they would either follow the PC's route until they found him or patrol it in reverse until they achieved the same result.

Even in the 1970s, when you met the Shift Inspector in the street, the PC came to attention and saluted him (up to 1975). They would then ask to see your pocket book and examine all the entries back to the last time it had been 'supervised' by them or a Section Sergeant. They would ask questions to confirm that any 'Summonses' and reports had been 'timeously submitted' and any matter requiring a report or any other action had been carried out.

If they were satisfied, they would sign and date the book and return it to the officer.

I later found that this was most certainly not the procedure in the Met! 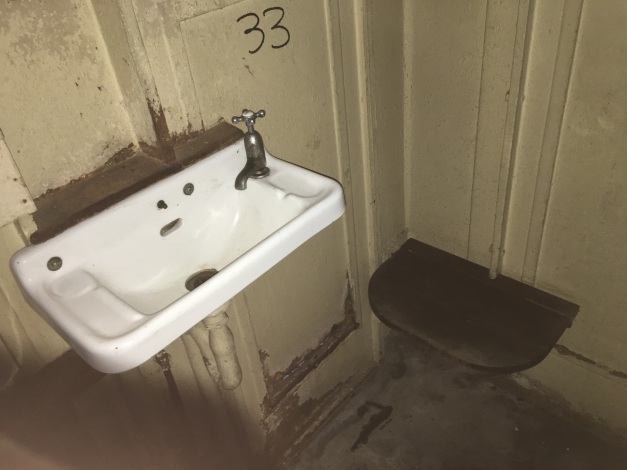 The 'Facilities' - water to fill the kettle and the 'Prisoner's Seat'. This seat was also used by 'The Probationer' assigned to learn the beats. 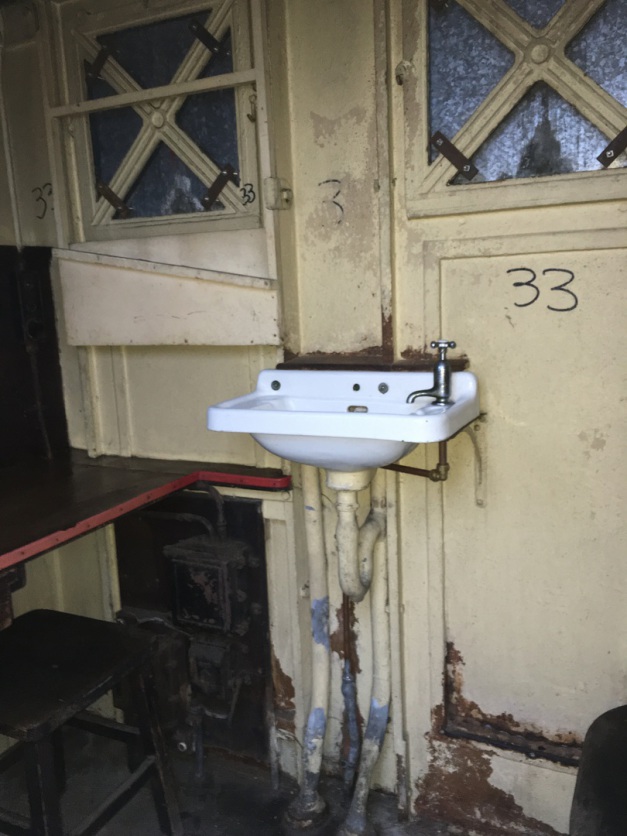 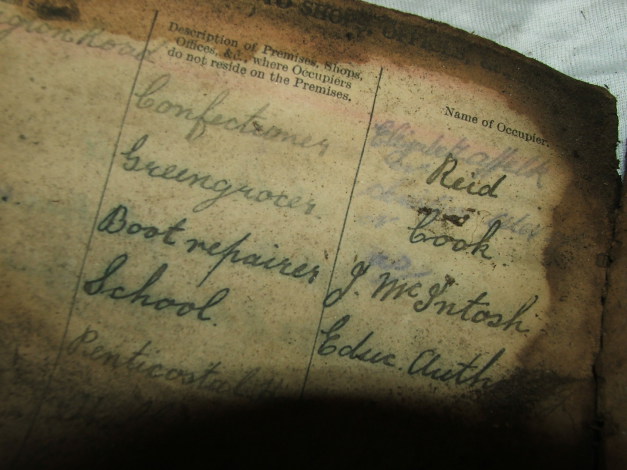 Example of a 'Key Holder's Book' from Leith. 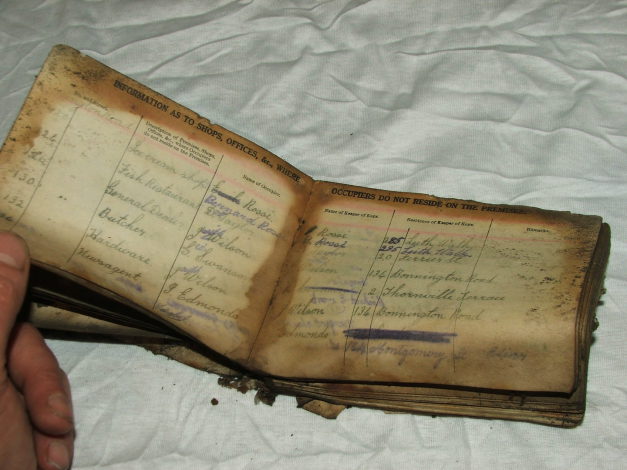 An example of a 'Key Holder's Book' from Leith.