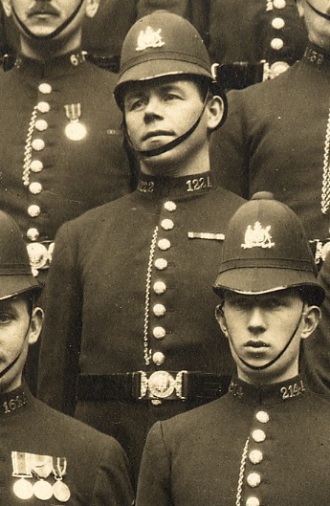 David Shepherd Bayne was born in Creich in the County of Fife on 3 June 1893. His father was James Bayne, a Ploughman and his mother, Euphemia Thomson or Bayne. He was one of seven children.

David Bayne joined Edinburgh City Police on 29 September 1914 and was posted to ‘A’ Division with the shoulder number 53.

On 7 December 1914, he resigned from Edinburgh City Police to join the Army.  He enlisted in the Royal Scots as Private 19416 but was later temporarily transferred to the Military Foot Police with the number P/15875.

His Medal Index Card (MIC) confirms his entitlement to the British War Medal and the Victory Medal. He can be seen wearing both ribbons in a Divisional photograph taken in 1922.

Many First World War records were destroyed in enemy bombing of London during the 2nd World War and I have been unable to trace David Bayne’s records so far.

In the “Weekly Record” of Edinburgh City Police for 8 July 1919, under “Re-Appointments” it states:

On 1 November 1927, he was “Commended for courageous conduct in stopping a runaway horse in Market Street on 18 October 1927.”

On 26 October 1943, along with PC 74 “A” James McGregor, David Bayne was “Commended for vigilance and tact displayed leading to the arrest of five men for housebreaking.”

He died in the Royal Infirmary, Edinburgh on 1 June 1950.