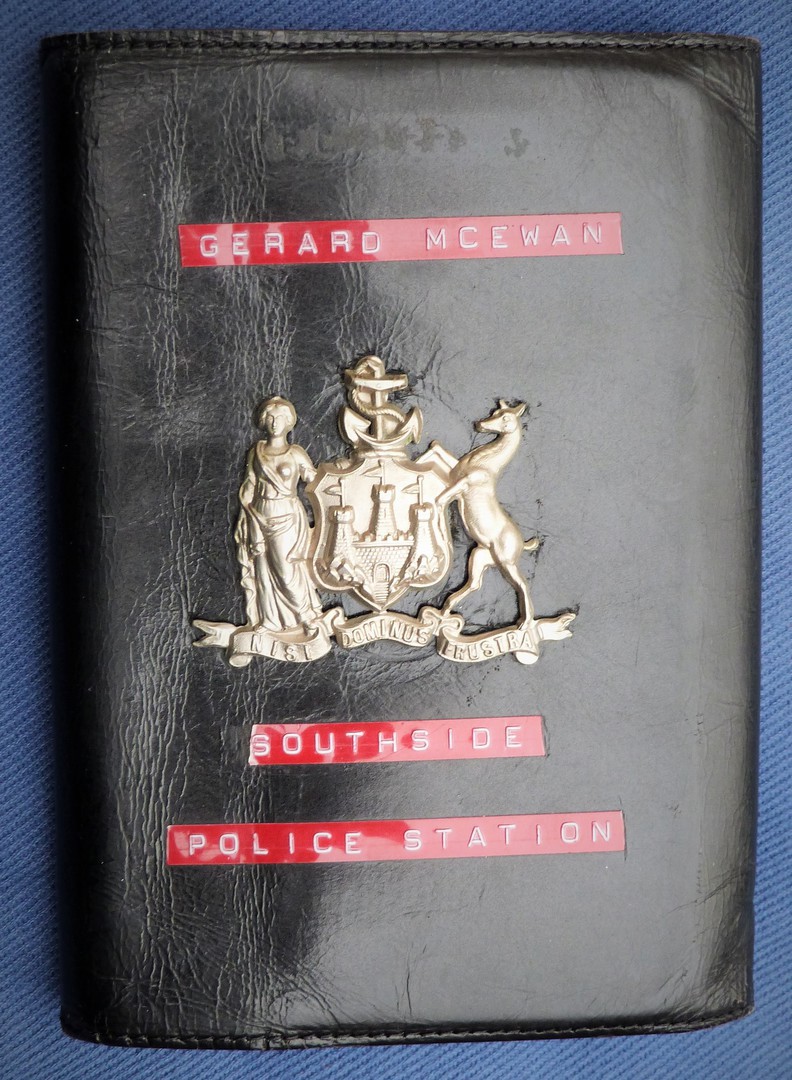 The force did not issue an ‘official’ note book cover in the early 1970s but it was possible to buy a custom-made version and it was quite common to do so.

This note book cover was bought in 1974 in a shop in Victoria Street, Edinburgh, just up from Box 6 A in the Grassmarket.

It was either in the Antiques Shop on the first bend as you go up or in a small shop just after there? Unfortunately, I cannot remember. Please get in touch if you remember the exact shop.

The cover fitted the book exactly and had room in the back for the little aides-memoire on Drink Driving, Bicycles, reporting crime and the personal ‘Authorisations’ under the Road Traffic Acts.

The note books themselves as I remember them, had black covers although the example shown below, from late 1950s or early 1960s, has a green cover.

The books were numbered to the person issued with them beginning at No. 1 and so on. The details were recorded in a book in the Administration Office at each Divisional Station. I remember when I was a Cadet in the West End, regularly booking new books out, old books in and also in and out when the book was required for giving evidence at subsequent court proceedings.

I seem to remember drawing a small margin on the left side of every page and making an entry for every day (including rest days). The parade time showing date, time and location (usually a box) was folowed by the 'Sunrise' and 'Sunset' times (for lighting offences).

The books would also be checked regularly by Section Sergeants when they visited Beatmen on the beats. They would read every entry from the present back to the last time a Sergeant or Inspector had examined it, ask questions regarding entries on whether reports or ‘summonses’ had been completed and if satisfied, they would then sign and date the book with their name and collar number.

Although discipline was not as harsh as it had been in the early 20th century, the Sergeants and Inspectors were strict and not shy of telling you where you had gone wrong and making explicit the consequences of failing to correct unacceptable conduct!

By contrast, when I joined the Metropolitan Police I thought the atmosphere was much more relaxed towards day-to-day discipline and ‘Pocket Book’ administration was virtually non-existent. I certainly was never expected to make a 'Pocket Book Entry' for every day of the year! Curiously, I found the Territorial Support Group to be the most highly disciplined unit in the Met but that also depended on the leadership of effective Sergeants and Inspectors.

In fairness to the Met, the scale of operations is hard to comprehend until you experience it.

With the wide use of ‘social media’ every force is under the same pressure as the Met now but up until around 10 to 15 years ago, the chances of a provincial English, Scottish or Welsh force making the Six O’ Clock News was remote. However, at that time, any PC in London might feature on the local evening news for simply doing their best but failing to 'meet the needs’ of whoever had the best connections to media outlets in support of the ‘cause’ on that particular date. 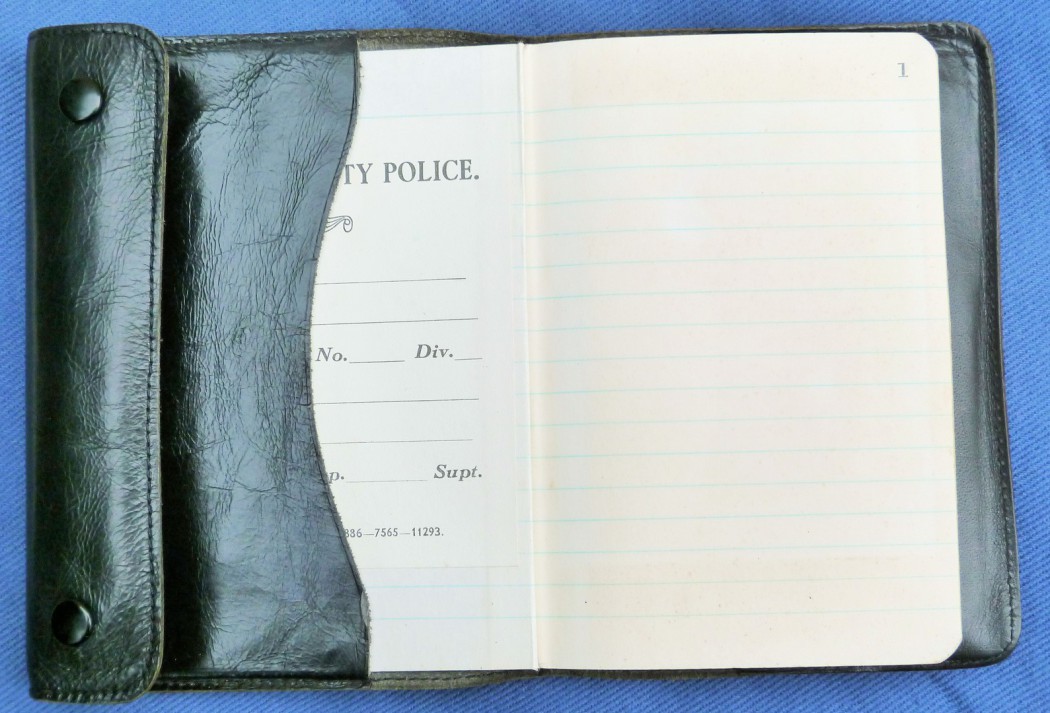 Cover open and book in use 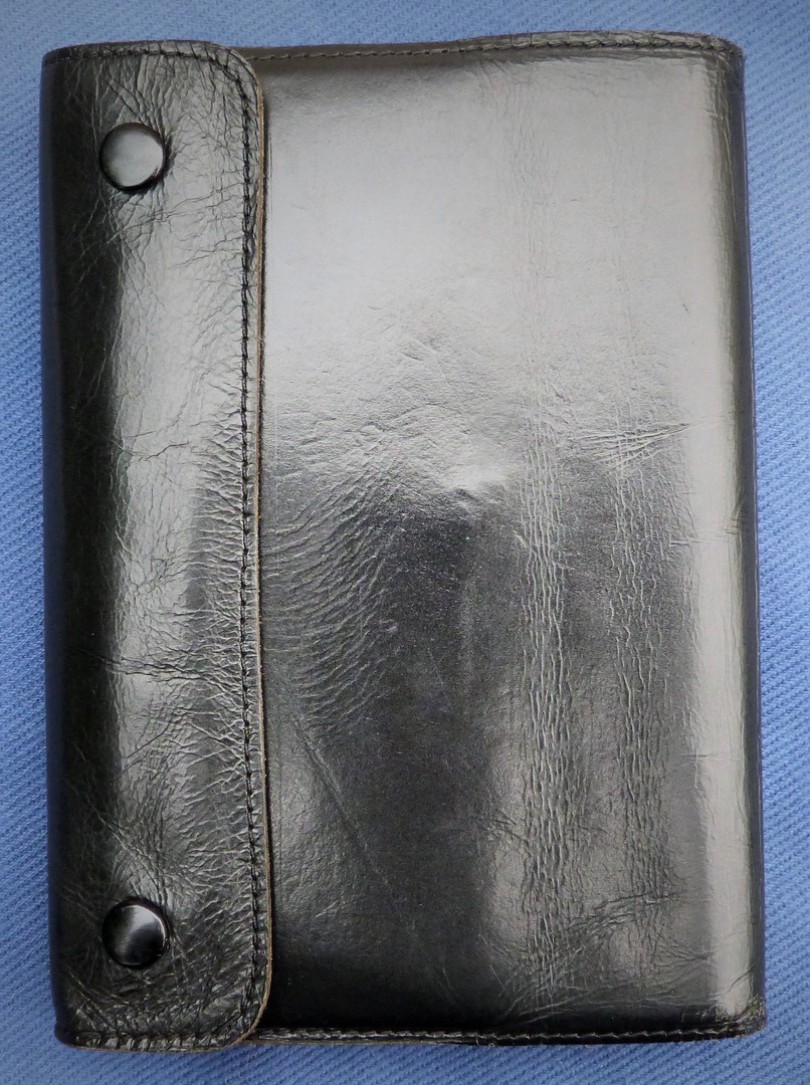 Back view of cover 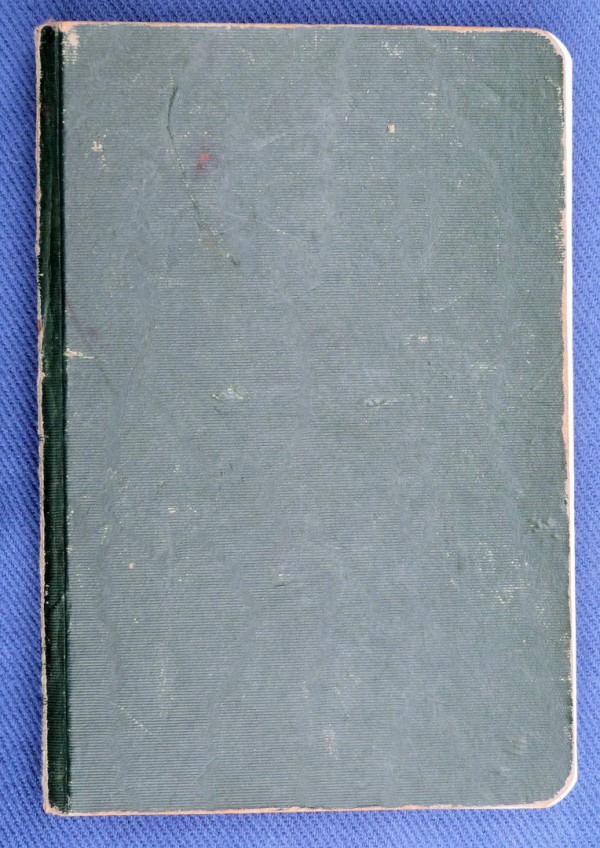 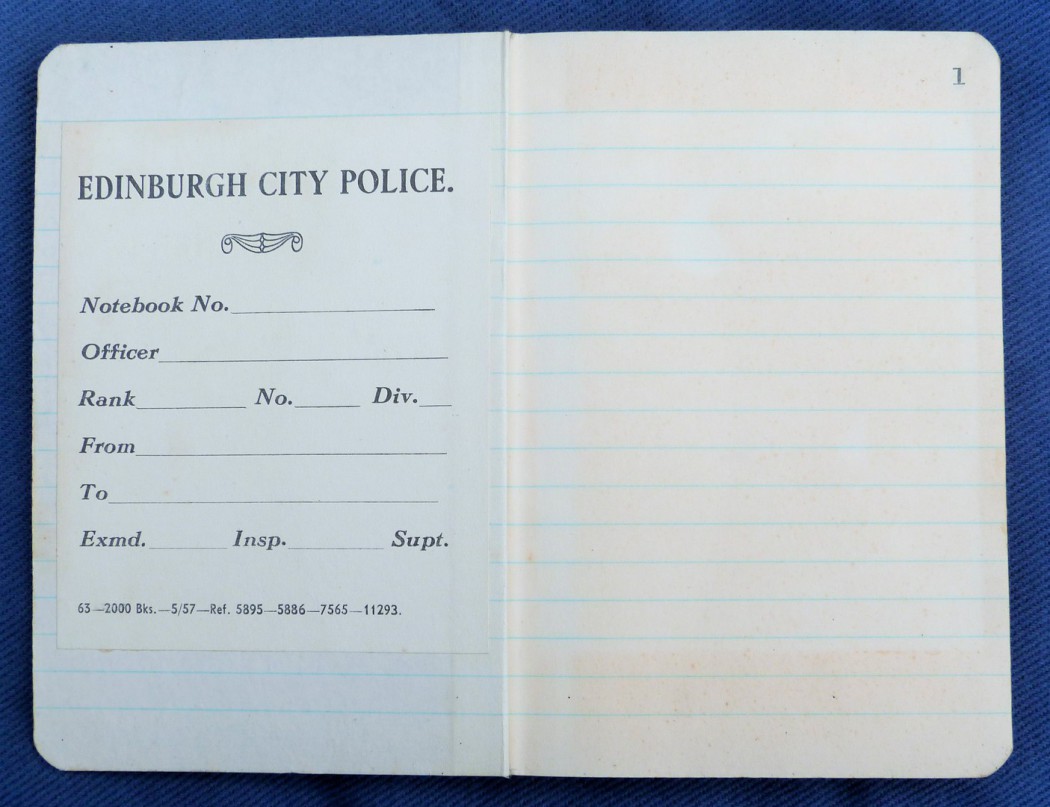 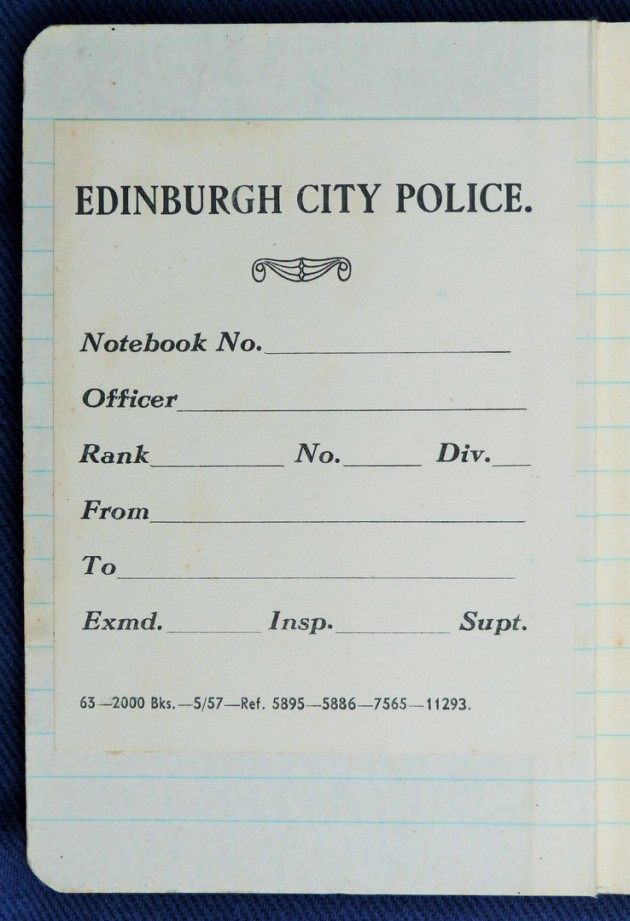 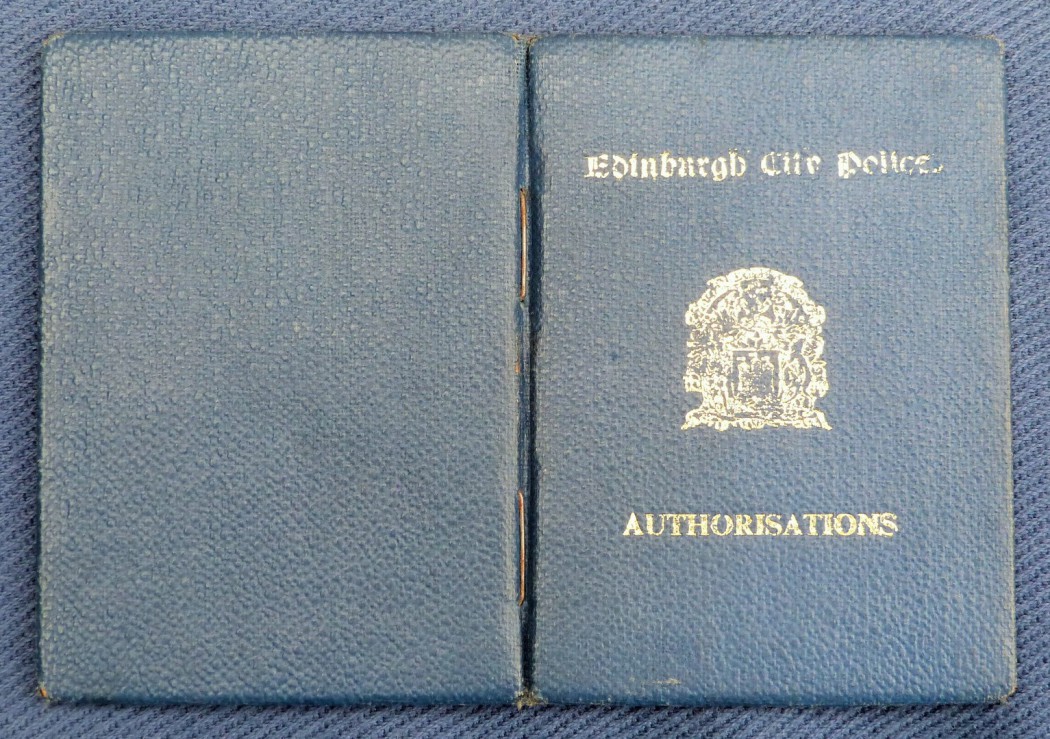 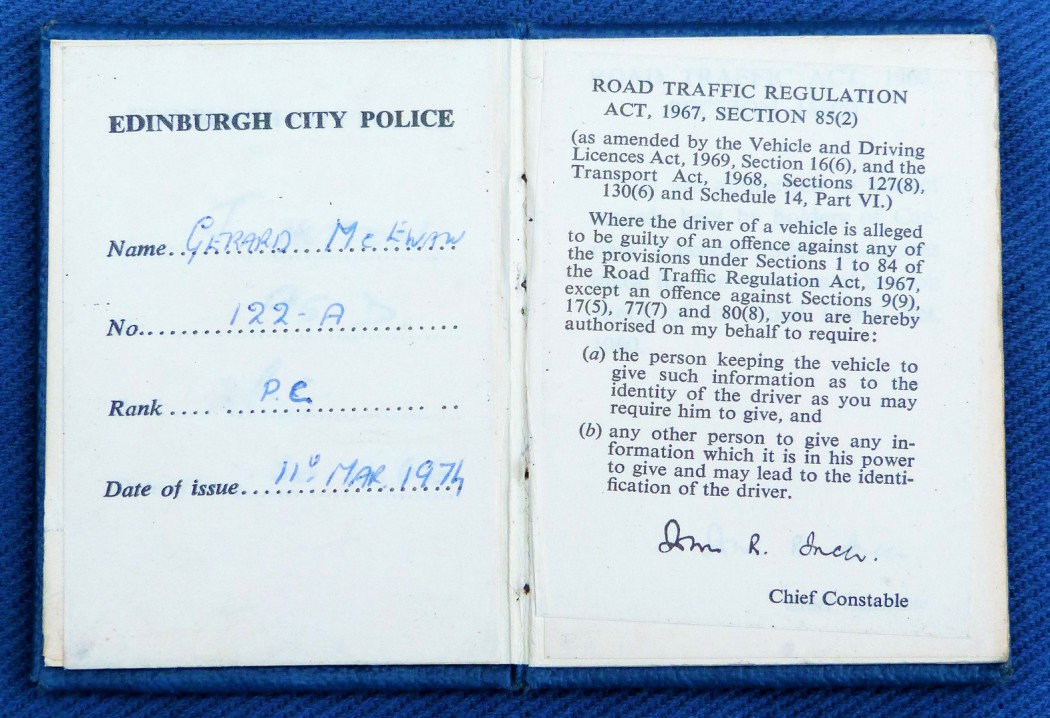 The Authorisations under the Road Traffic Acts 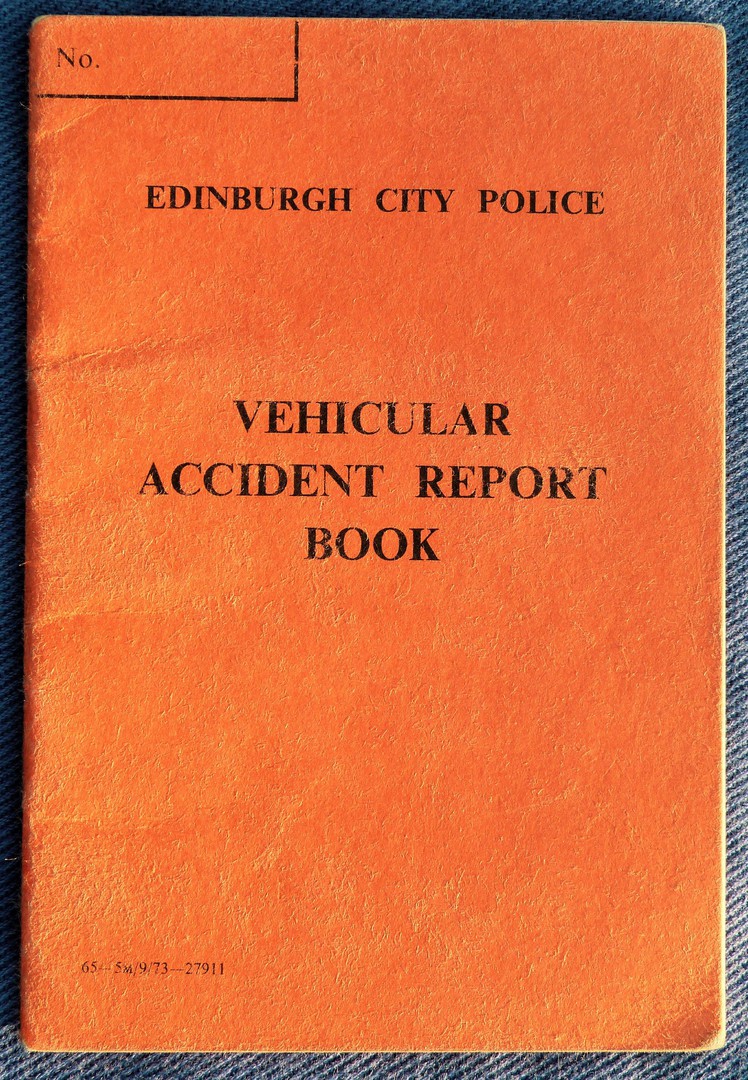 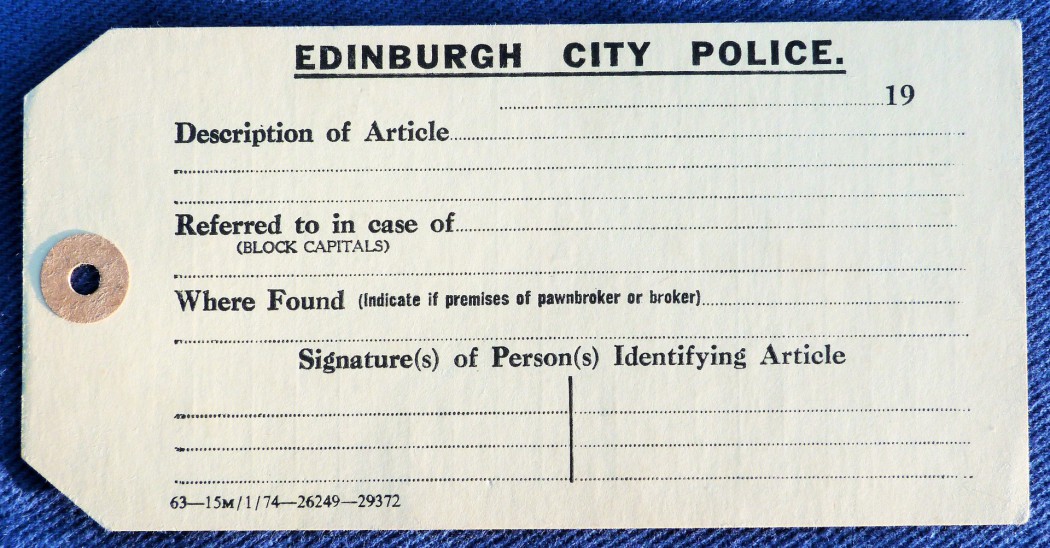 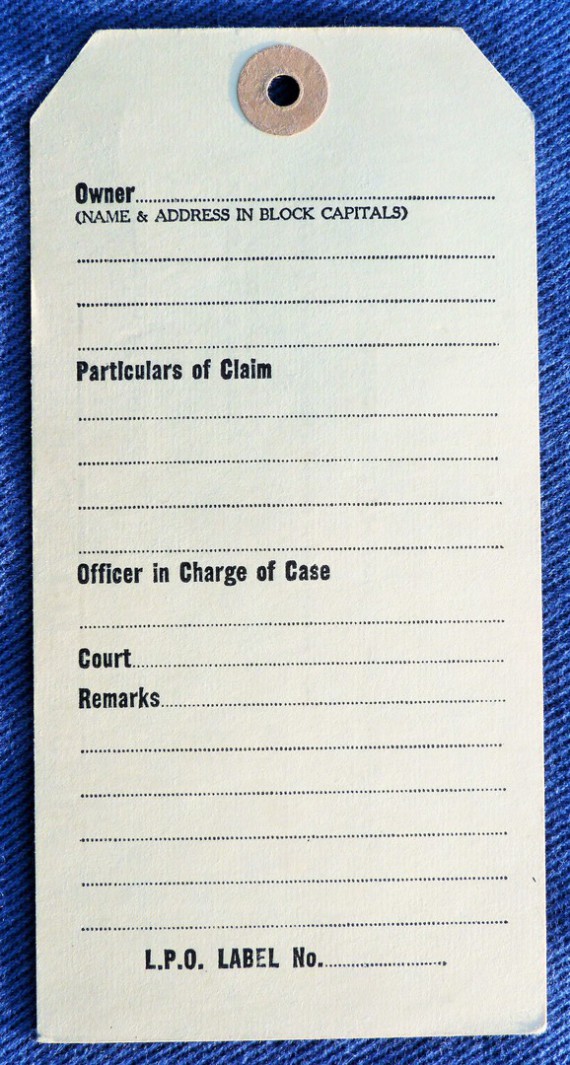 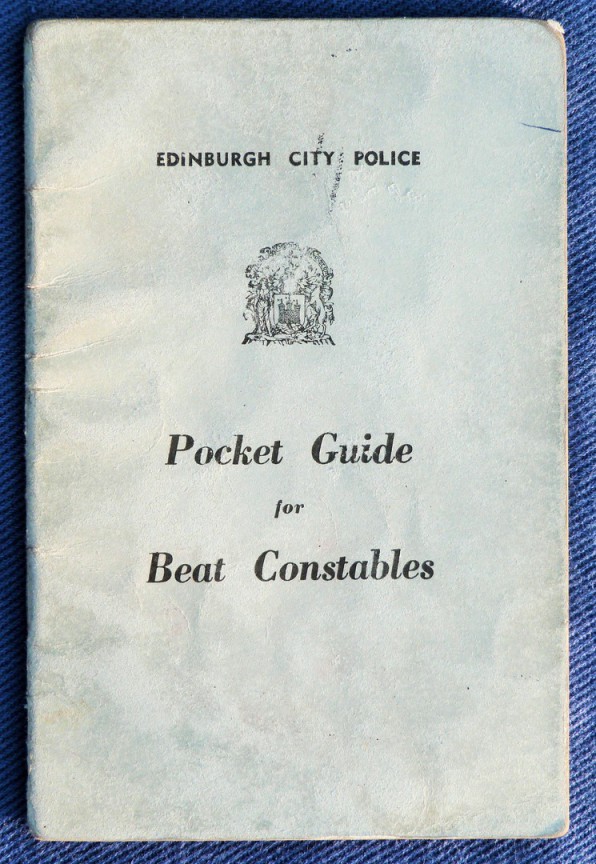 The Beat Box system of policing was introduced in 1933 by Chief Constable Roderick Ross.

The city was then divided into 4 Territorial Divisions, with ‘D’ in the West End becoming ‘C’ and ‘E’ (Leith) becoming ‘D’. Traffic Department was then designated ‘E’ Division:

The divisions had 4 Sections, each with a Section Police Sergeant and usually 6 Beat Boxes per section. The inner city sections were usually the 1st and 2nd Sections with the 3rd and 4th Sections being a mixture of bicycle and foot beats in the outer parts of the city housing schemes and residential suburbs.

In each Division, there were 4 ‘Shifts’ or ‘Teams' providing 24 hour cover with 1 Shift Inspector per Team.

The officers who ‘worked the beats’ were universally known as ‘Beatmen’ for the simple reason that until 1975, they were all men. Only with the Equal Pay Act in 1975 was the Police Woman's Department abolished, woman officers given equal pay to the men and the divisional beat patrol teams mixed gender.

The Beat System was overtaken in the late 1970s and eventually disappeared in the 1980s although many of the boxes are still at or near their original locations although, the City Council has sold many off.

The booklet above was intended as an ‘aide-memoire’ to assist the Beatmen with the many challenges they might face in ensuring that every matter requiring a report was attended to punctually. 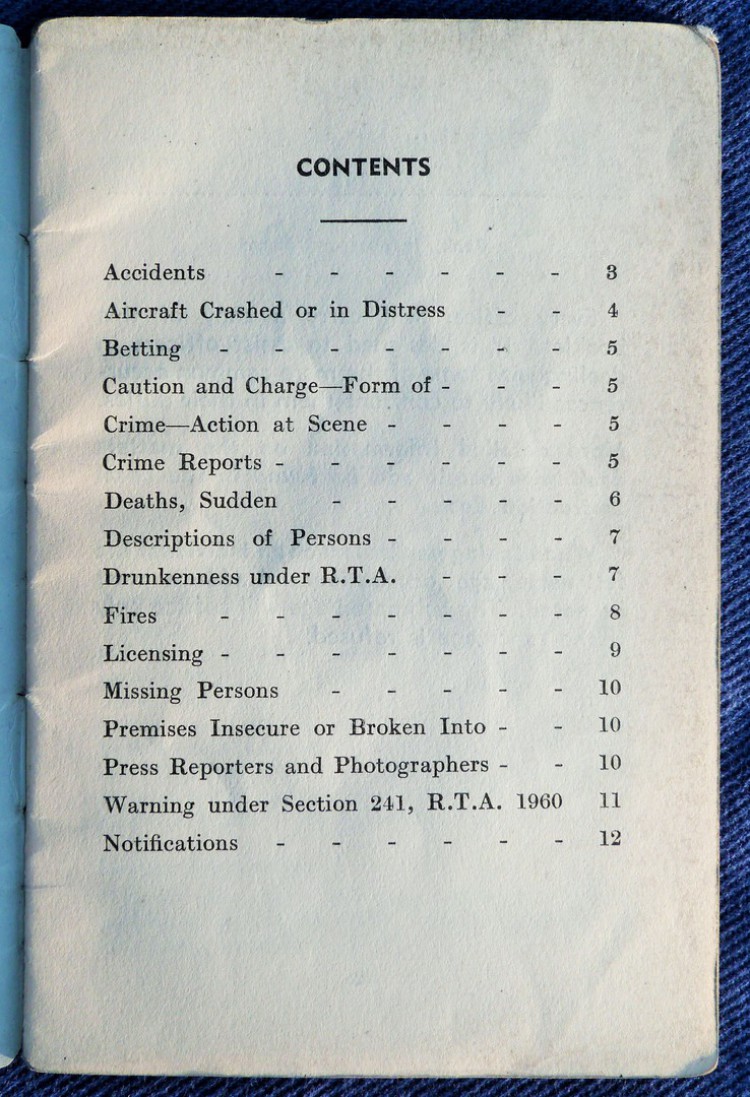 The Contents section of the Pocket Guide 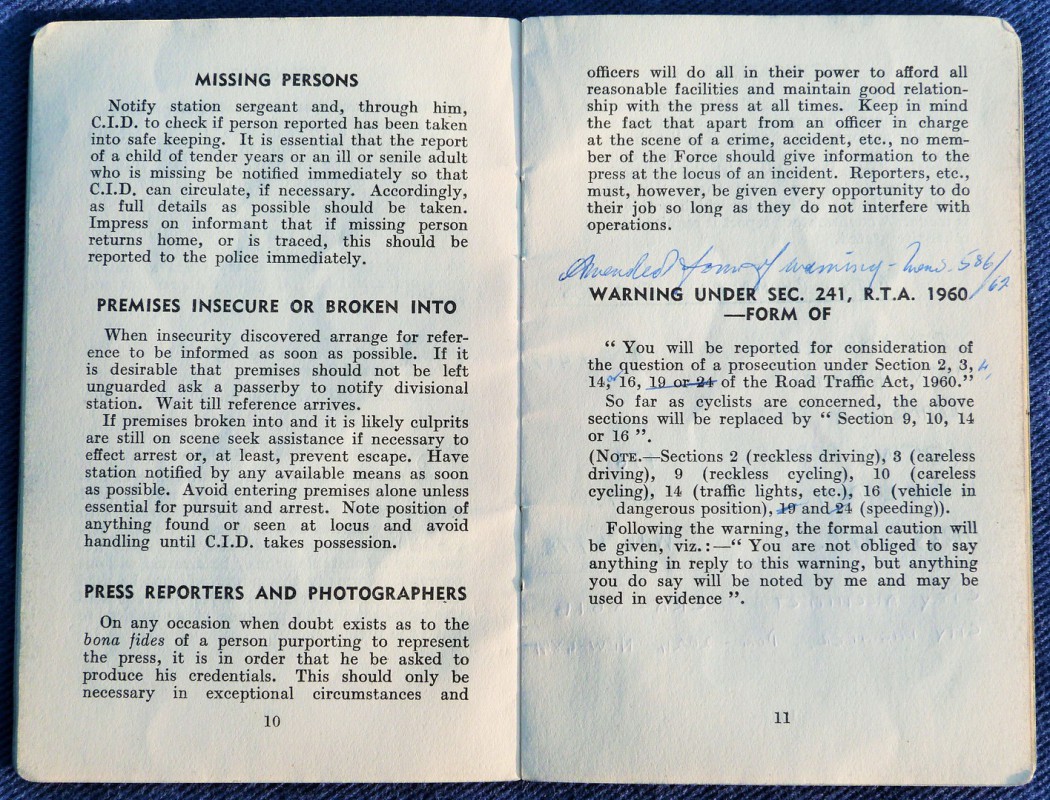 A selection of sound advice on pages 10 and 11 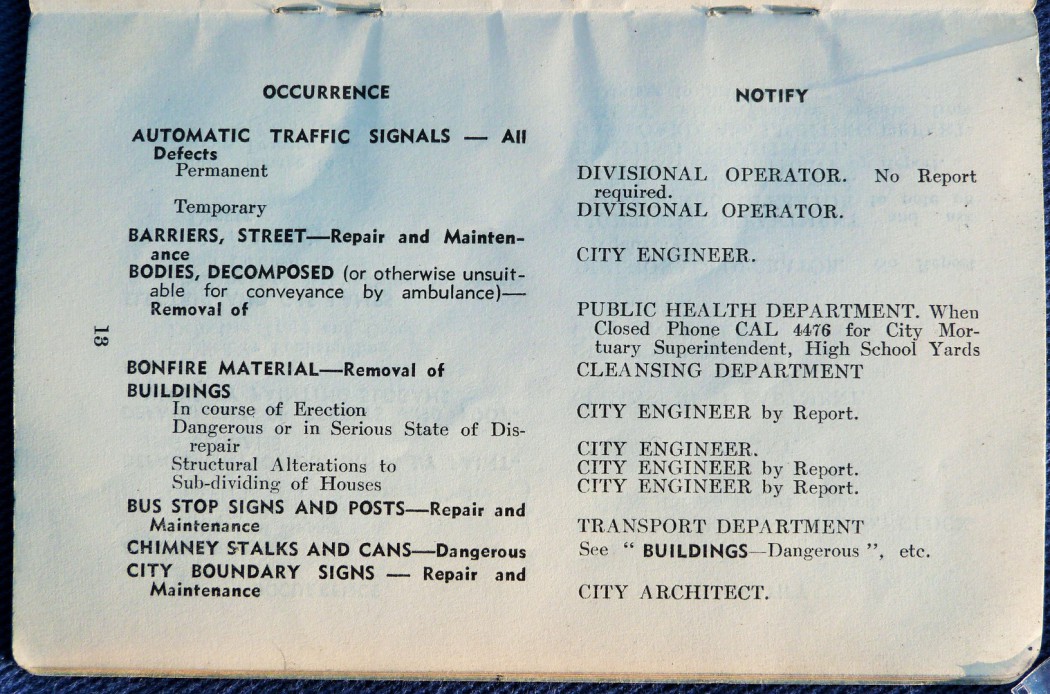 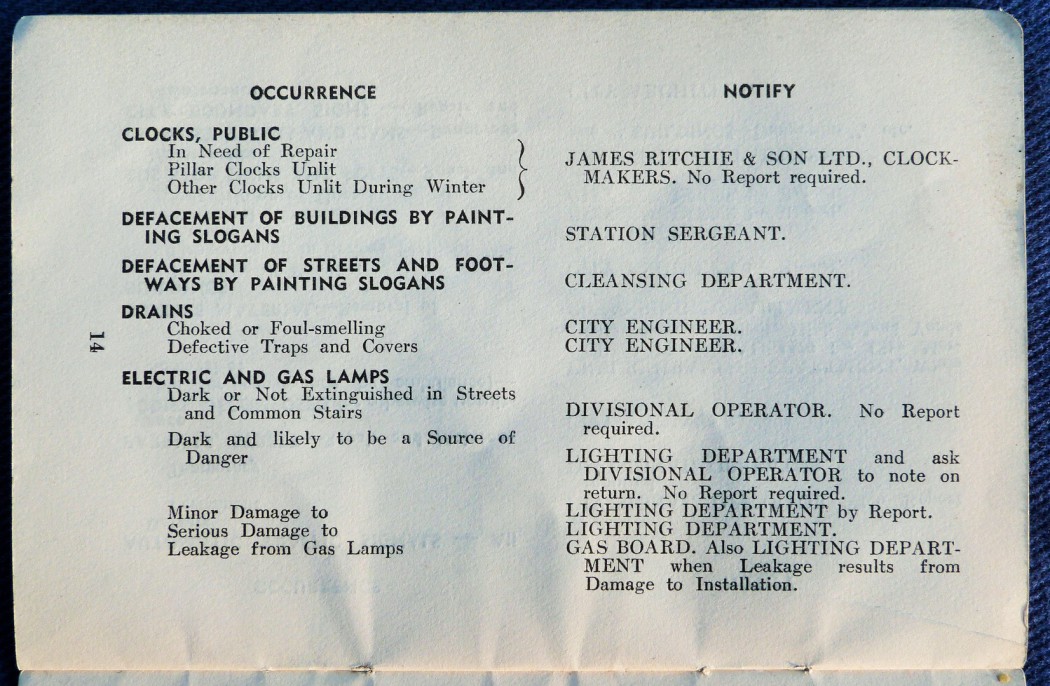 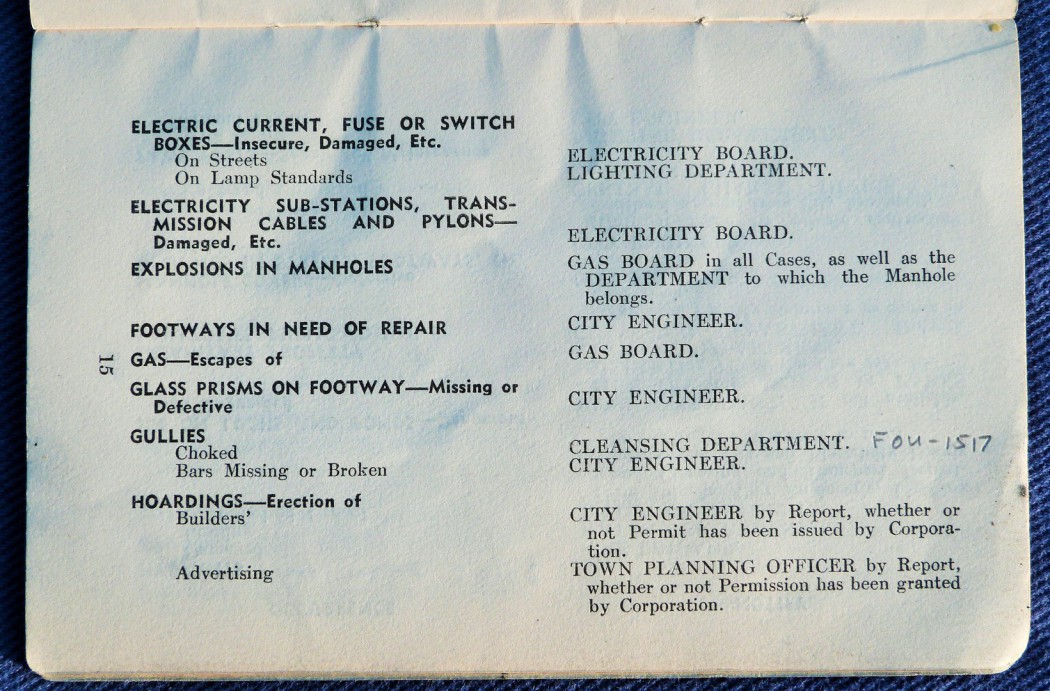 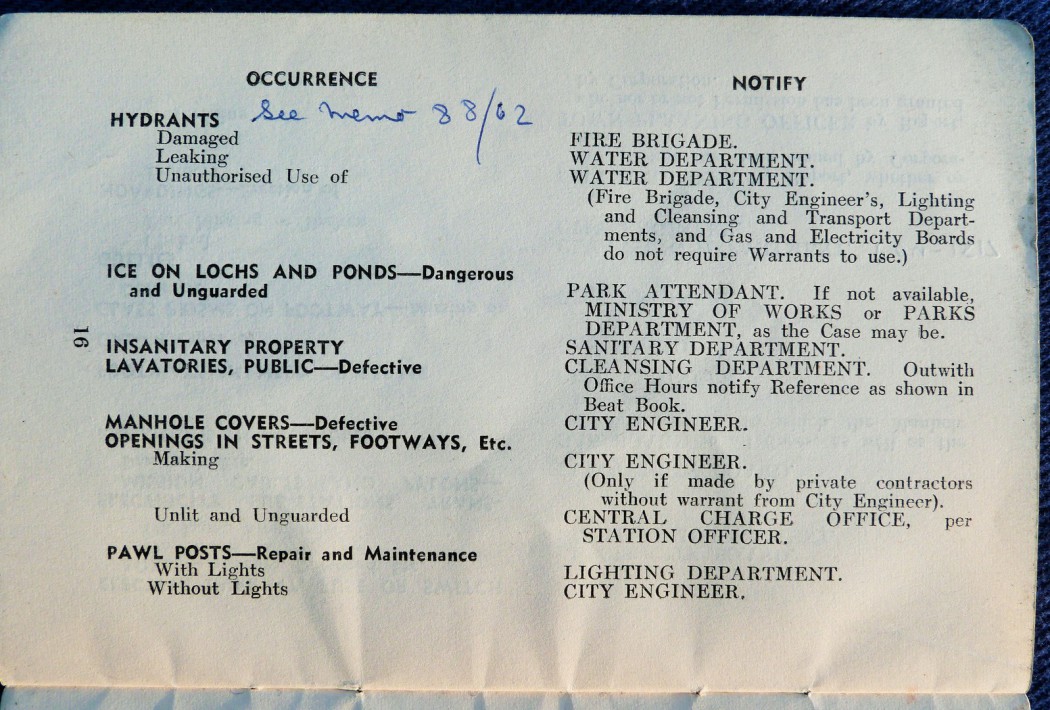 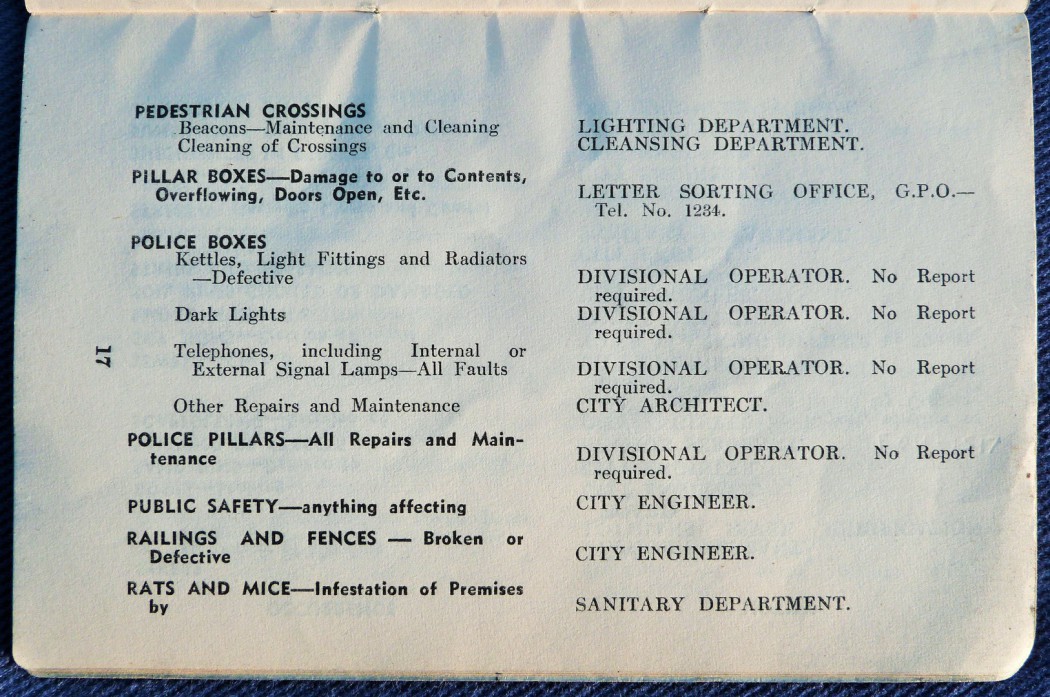 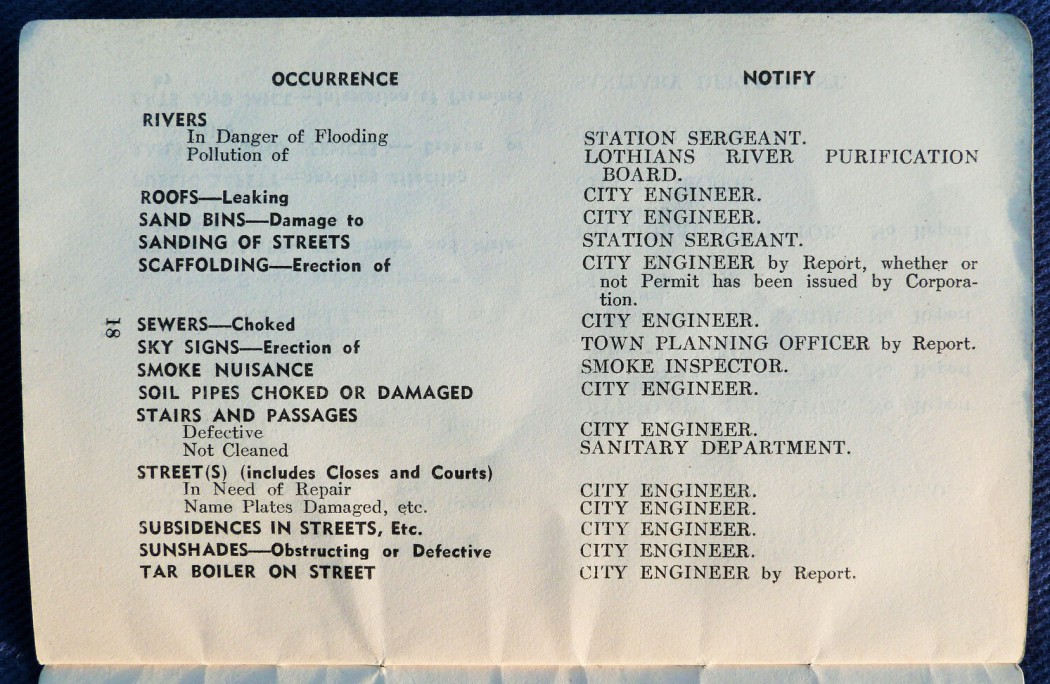 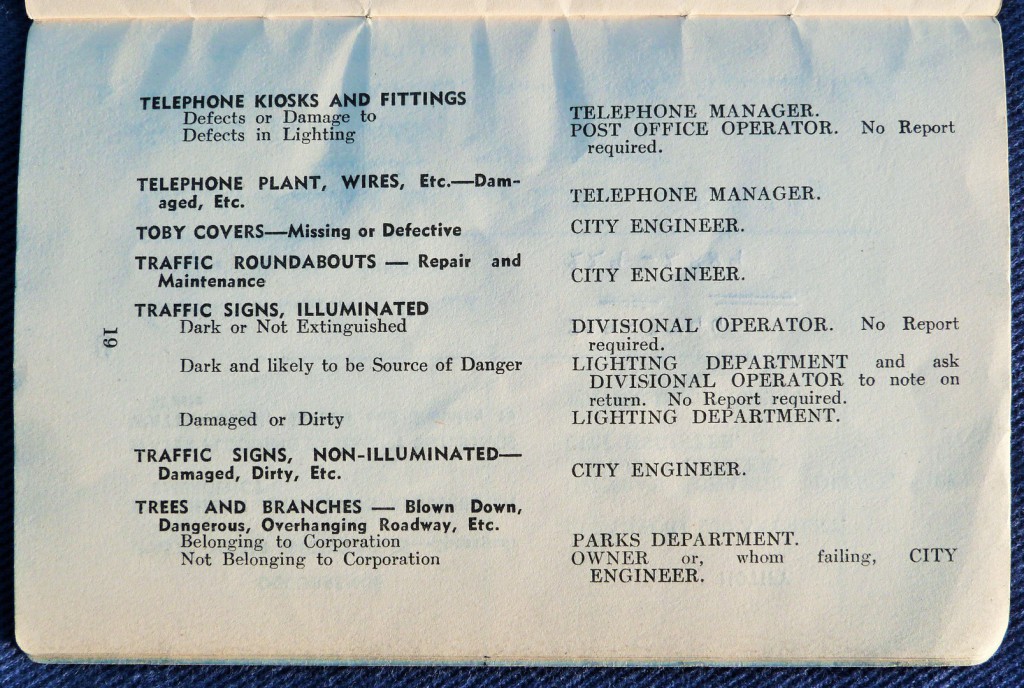 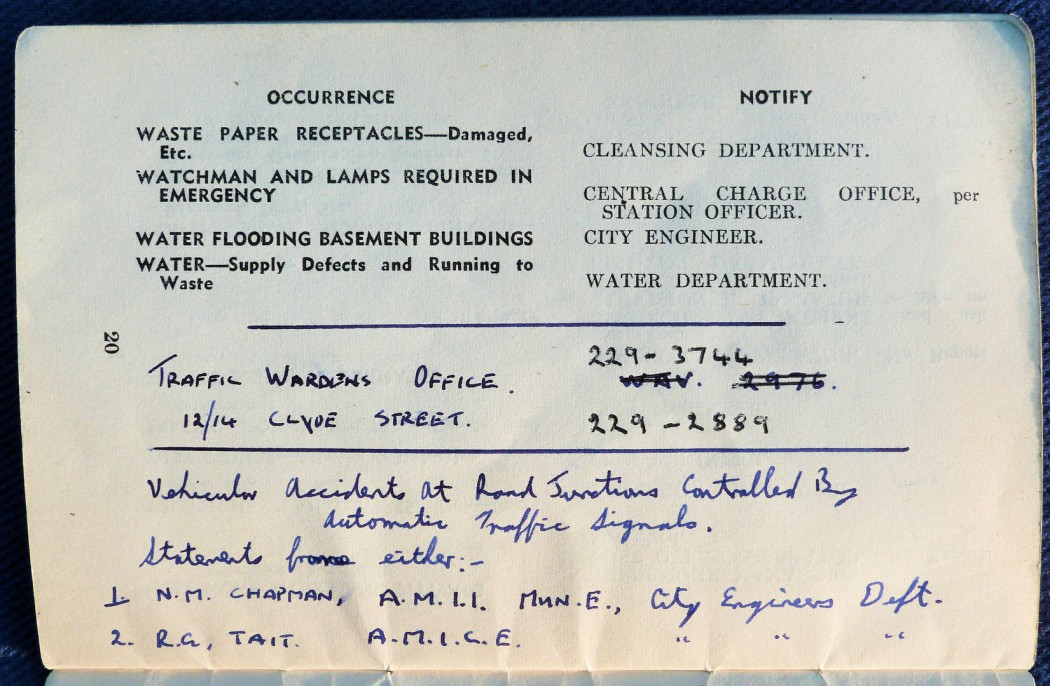