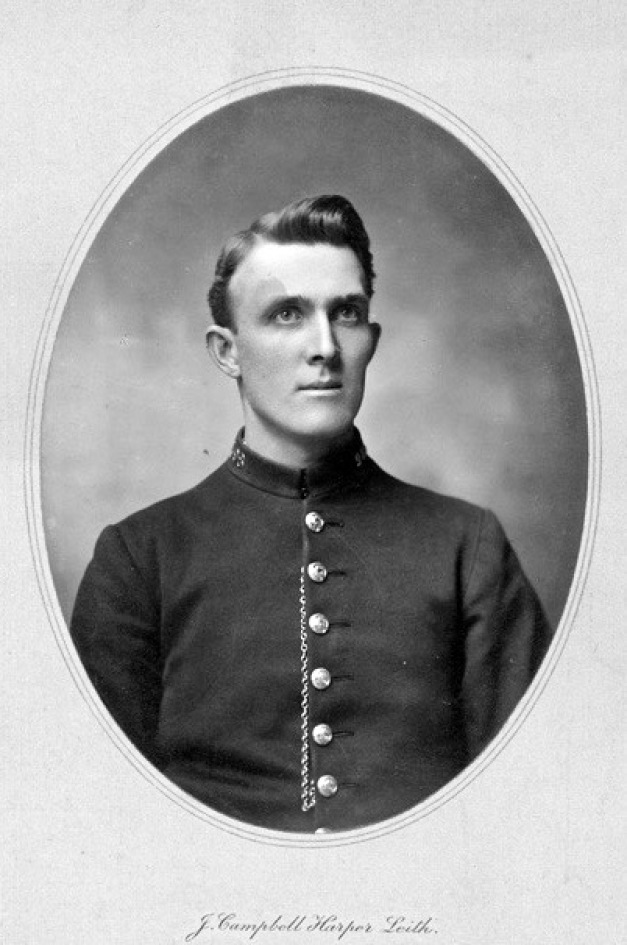 This is the story of a young man from Midlothian who moved to Leith to work, married, raised his family, moved away for a few years before returning and living out his last years there with his daughter, son-in-law and grand-children.

David Bolton was born in Borthwick in the County of Edinburgh on 13 September 1886. His parents were James Bolton, a Railway Signalman and Janet Woodrow or Bolton. David was the eldest of four sons.

David was a keen supporter of Arniston Rangers Football Club (FC), his local team in Gorebridge. He later supported Hibernian FC, the local club in Leith when he and his family lived in Rossie Place, not far from Easter Road.

Page 3 of the Dalkeith Advertiser of Thursday 12 July 1906 carried the following article under the heading of “Formation of Boy’s Brigade”. It went on as follows:

This service in the BB was to become relevant later when he applied to join Leith Burgh Police.

David was working as a Labourer when he applied to join Leith Burgh Police in late 1907 or early 1908. He was required to provide testimonials to his character, two of the transcripts of which, can be seen below. 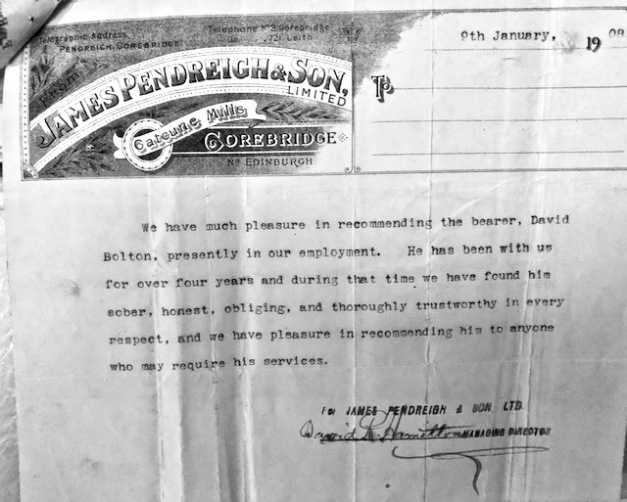 The Testimonial given by James Pendreigh & Son in support of David Bolton's application to join Leith Burgh Police in 1908.

(The letter was signed on behalf of James Pendreigh & Son by) “David R. Hamilton, Managing Director.”

“I have pleasure in bearing testimony to the excellent character ………….worth of Mr David Bolton. I have known him since childhood in connection with my Bible Class, Boys Brigade and Young Men’s Guild, have had special opportunity of studying his character. I have found him to be truthful, honest, sober, obliging and trustworthy and can confidently recommend him.” 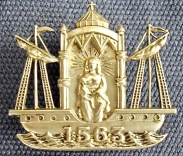 The picture on the left is a helmet plate used by the Police Constables and Sergeants of Leith Burgh Police until 1920. It features an image of the ‘Stella Maris’, Mary Star of the Sea, the Guardian of Mariners.

This is the badge worn by Constable David Bolton.

The testimonials clearly worked as the next document is a letter from “The Police Department, Town Hall,  Leith”, dated “ 30 July 1908”.signed by “James Ormiston, Inspector”  and  stated the following:

I am instructed by the Chief Constable to inform you that there will be a vacancy in this Force on 15 August 1908, and if you will call her a few days before the above-mentioned date and pass the medical examination you will get an appointment.

A picture of the original letter can be seen below.

There are very few records of Leith Burgh Police still in existence and most of these details have been taken from the records of Edinburgh City Police. PC L 98, David Bolton’s picture can be seen at the top of this page. 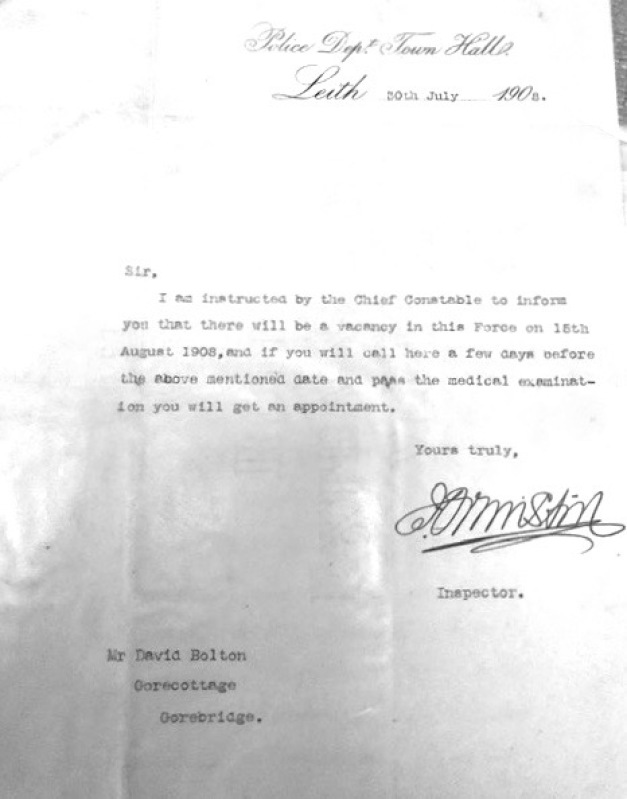 Under the heading of “Silver Wedding”, the paper reported that:

On 22 September 1915, at 10 Bannatyne Street, Lanark, after Banns according to the Forms of the United Free Church, David Bolton, (29), Police Constable, of 18 Beechwood Terrace, Leith, married Lizzie McKenzie, (25), a Domestic Servant of Drove Road Cottage, Lanark.

David’s parents were James Bolton, a Blacksmith’s Labourer and Janet Woodrow or Bolton. Lizzie’s parents were, Kenneth McKenzie, a Railway Surfaceman and Helen Clemenson or McKenzie.

Janet Woodrow Bolton was born in the Royal Maternity Hospital on 1 May 1918. Her father was David Bolton, a Police Constable in Leith and her mother, Elizabeth Helen Wilson Brown McKenzie or Bolton.

Several years ago, I was doing a voluntary project in Edinburgh City Archives  looking at police personnel records. I noticed that several of the Edinburgh records commenced with the words, “Transferred from Leith Burgh Police with x years and x days service counting towards pension…” All of these entries were dated 2 November 1920.

It occurred to me that this might be a previously unknown record of every Leith officer who transferred into Edinburgh City Police on that date. I discussed the matter with the then City Archivist, Richard Hunter, and was given permission to look for every Edinburgh officer with a similar entry on their personnel file. This exercise resulted in the identification of all the Leith officers who had joined Edinburgh City Police on 2 November 1920. The only exception was Chief Constable John MacLeod. It was made clear to him that he was not to be transferred.

The WR of 25 December 1925 that PC Bolton had Passed the Elementary Police Examination held on 10 November 1925. This qualified him for promotion to the rank of Sergeant.

Edinburgh City Police held annual Church Parades in St Giles Cathedral having marched down from the Castle Esplanade. PC David Bolton is 3rd from the right in the row nearest the camera.

Edinburgh City Police held an annual Church Parade from the Castle Esplanade to St Giles Cathedral. The above picture shows some of the Edinburgh officers waiting to be marched off. PC Bolton is 3rd from the right on the row nearest the camera.

The WR of 31 July 1928 recorded that PC635 E, David Bolton had been Commended for tact and alertness displayed in securing the arrest of a metal thief. 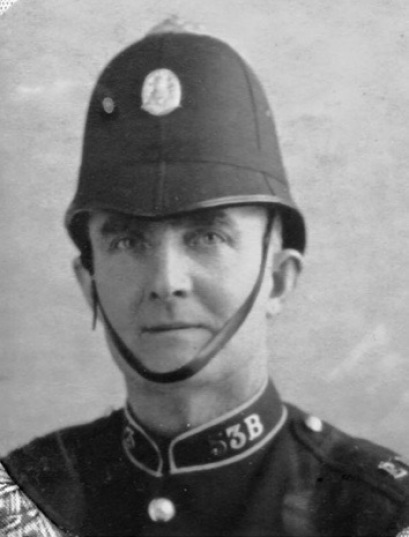 David Bolton can be seen as a Sergeant with the collar number 53 B to the left.

Among the names listed in the medal roll for the King George VI Coronation Medal was Police Sergeant David Bolton of Edinburgh City Police. 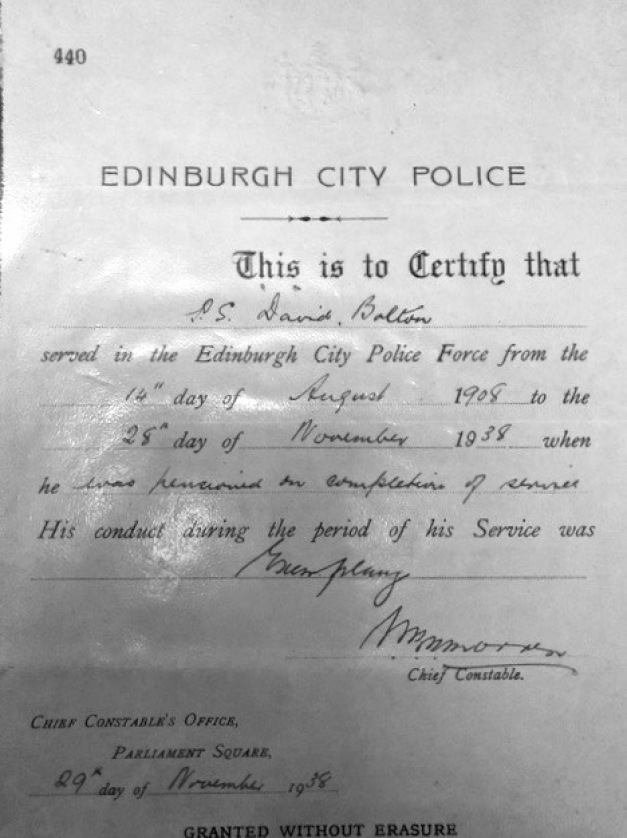 It is still the practice now that when an officer retires, he or she are given a Certificate of Service which states their period of service, their description and their character assessment. The original purpose of the certificate was for identification of the retired officer when they went to collect their pensions in cash. David Bolton's Certificate of Service can be seen above.

David Bolton was issued with Certificate of Service No. 440 which states that he served in Edinburgh City Police from 14 August 1908 to the 28 November 1938 when “he was pensioned on completion of service.” “His conduct during the period of his Service was Exemplary.”

Presentation Clock on his Retirement

It is traditional that colleagues of a retiring officer have a collection and buy them a present. It was no different  in David Bolton’s case and his colleagues in B Division (where he served as a Sergeant) and D Division ( the former Burgh of Leith), held a collection for him. The clock presented to him on his retirement in 1938 is below and the inscription on the clock is below that. 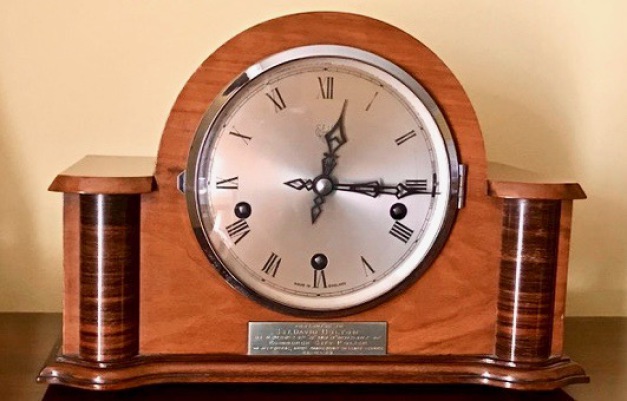 Clock presented to PS Bolton on his retiral from Edinburgh City Police in 1938.

Insciption on the Presenation Clock given to PS 53 B David Bolton on his retirement from Edinburgh City Police in 1938.

Between 1939 – 1945, David Bolton was asked to return  to the police as a War Reservist. This was not unusual  as the War Reserves were used to back-fill for officers either ‘Called to the Colours’ as Navy or Army reservists or who were later called up in the course of the war. It is likely that he served throughout the war as among the family heirlooms is a Certificate of his entitlement and award of the Defence Medal (see below).

David Bolton’s daughter Janet  also served between 1939 – 1945 in the Women’s Auxiliary Police Corps in Edinburgh. Her picture can be seen below. 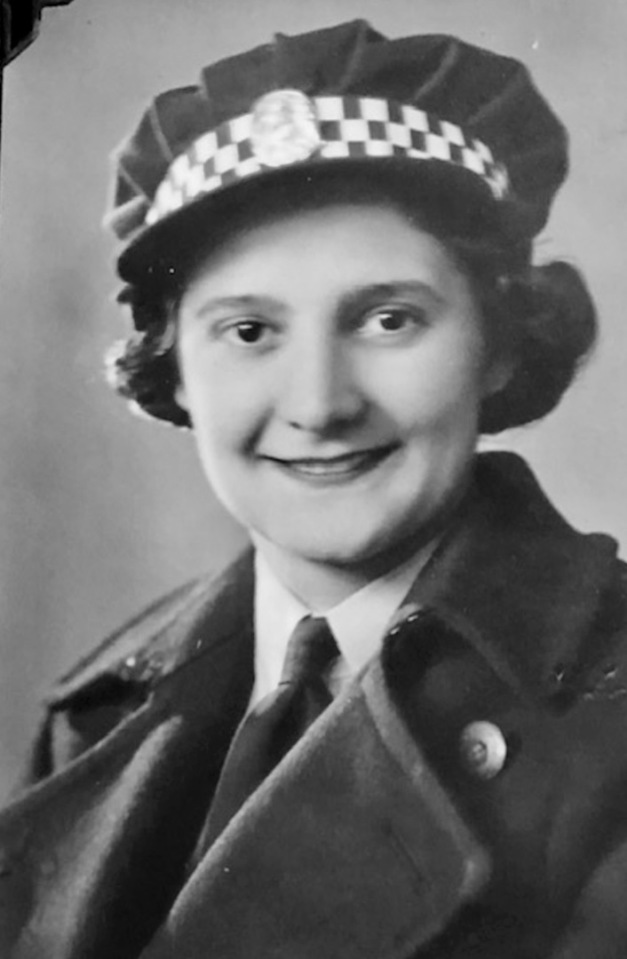 Register of Marriages in the District of Haymarket in the City of Edinburgh, 1940

On 7 December 1940, at Granton Parish Church, Boswall Parkway, Edinburgh, after Banns according to the Forms of the Church of Scotland, James Rae, (27), a Mercantile Clerk, then presently a Lance-Corporal in the Royal Army Service Corps, home address, 3 Pilton Avenue, Edinburgh, married Janet Woodrow Bolton, (22), an Audit Clerk of 29 Boswall Drive, Edinburgh.

James was the son of William Slaker Rae and Ann Walls Peace or Rae.

The witnesses were T. Montgomery and C. M. Bolton and the ceremony was performed by Thomas M. McFarlane, Minister of Granton Parish Church.

The Reverend McFarlane was a very popular Minister and the family spoke of him for many years. The family think that David Bolton was also an Elder of Granton Parish Church.

In 1945, on his first trip outside Scotland, David and Elizabeth accompanied their daughter to London on her way to join her husband James in Turkey, where he was by then, working in the Diplomatic/War Office field. Unfortunately, the trip was cancelled as she thought her first child was coming early. 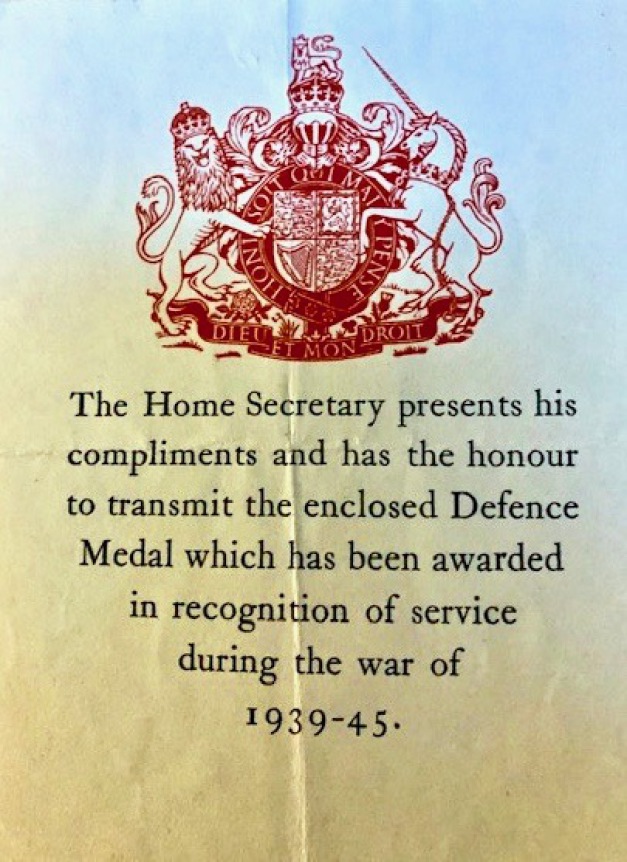 Note from the Home Secretary enclosed with award of Defence Medal for service during World War 2.

Life after the Police

Around 1948, David and Elizabeth sold up their house in Pilton and moved to a small-holding on the River Clyde in Lanarkshire in Kirkfieldbank. Elizabeth had lived in Lanarkshire before their marriage.

Their grand-daughter remembers being taken on walks around the Clyde at Kirkfieldbank.

David and Elizabeth grew large quantities of fruit and vegetables and sold them in punnets at the gate. Then tragically, Elizabeth died in 1953.

Register of Deaths in the District of Kirkfieldbank in the County of Lanark, 1953

After Elizabeth’s death, David sold up in Kirkfieldbank and moved in with his family back in Dudley, Leith.

His second trip out of Scotland was when the family stayed at a boarding house in Coldingham and they took a day trip to Berwick-upon-Tweed!

David had been a keen bowler and was at one time, Club Champion at Summerside Bowling Club in Leith.

He took his grandchildren on long Sunday walks around Leith, sometimes round  the docks. The dog would return exhausted. The children  were amazed at how many people knew their ‘Gaga’.

His grandson said of him. “He was always a “Leither’ and still complain in the 1960’s about Edinburgh taking over Leith”

David’s third and last trip out of Scotland was a coach tour to Austria with a pal when he was 78. His final trip was a coach tour of the Highlands the year before he died. His grand-daughter says he always took his big binoculars with him to take in the scenery. David Bolton died in the Western General Hospital in 1967.

Register of Deaths in the District of Leith in the City of Edinburgh, 1967

David Bolton, (80), Sergeant of Police (Retired), died on 13 May 1967 at the Western General Hospital, Edinburgh. His usual address was in Dudley Terrace, Leith. His son-in-law, James Rae, registered his death.

David’s final years were spent living in Dudley with his daughter, son-in-law and grand-children. He was always smartly dressed outside the house and polished seven sets of shoes every day for them all.

The following is a quote from David Bolton’s grand-daughter:

Like many of his class and generation, a good education would have made all the difference to him. He had a curious mind and although fully literate, with copper-plate writing, the only book I ever saw him read was the Bible – at bedtime.

Another time I asked him why he believed in God. He said he worked out that if God exists and he didn’t worship, then that could be nasty for him (Hell beckons). If God doesn’t exist but he still worships, then he hasn’t really lost anything at all – just a bit of Sunday. That is, it was an ‘insurance policy’!

This article was made possible by the generosity of David Bolton’s grand-daughter and grand-son who kindly offered the photographs and provided family details to complete the story. Thank you for your kindness in doing so. I hope it reflects some of the ‘Spirit of Leith’.