William Gordon was a Farm Labourer before joining the police in Lancashire after his 18th birthday in 1871. He later served in Cumberland before joining Lanarkshire Constabulary in 1876.

Later that year, whilst stationed at Lanark, William married Jane Sey, a Domestic Servant at Causewayend, Huntly in the County of Aberdeen.

William made rapid progress through the ranks of Lanarkshire Constabulary gaining experience in industrial disputes, sectarian disorder and mining accidents.  He served at Lanark, Carnwath, Blantyre, Hamilton and Wishaw and was appointed Superintendent and Deputy Chief Constable of Lanarkshire by 1886.

In 1891, he applied for the role of Chief Constable of Dumfries County Police. He was successful and served in that role until his retirement in 1932.

He served almost 60 years in the police with 41 of those years as Chief Constable.

During that time, he was made an Officer of the Most Noble Order of the British Empire, (OBE), awarded the King’s Police Medal for Distinguished Service, (1 January 1926), and the King George V Coronation (Scottish Police) Medal, 1911 for ‘Long and Meritorious Service’.

According to the Motherwell Times of Friday 3 June 1932, William Gordon’s  three brothers, ‘Andrew’ (sic)  (Alexander), George and James were also police officers. All three began their police service with Lanarkshire Constabulary. James and George Gordon completed their service with the force and retired at the rank of Sergeant. ‘Andrew’ moved to the South African Police and retired with the rank of Inspector.

(Author’s Note: I have found no record of a brother ‘Andrew Gordon’, being born in Forgue between 1853 and 1861 and it is possible that the Motherwell Times use of ‘Andrew’ is a typo. Alexander Gordon was born in Forgue on 29 October 1855.) 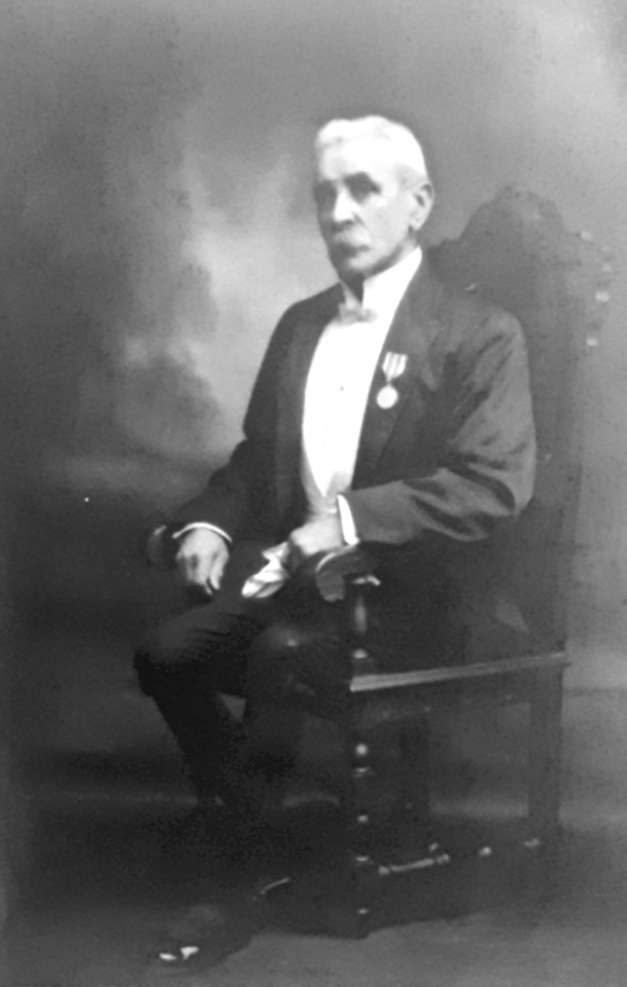 After his birth, the first record I found of William was in the Census of Scotland 1861 when he, his mother, his three brothers and half-brother, were living with his maternal grandparents at Monelly in the Parish of Forgue, Aberdeenshire. There is no mention of his father, William Gordon being present.

By the Census of Scotland 1871, William Gordon, (18) was working and living as a Farm Servant at Largue in the Parish of Forgue, Aberdeenshire. His employer was George Ferguson, (62), a ‘Farmer of 253 acres, employing 6 men’. 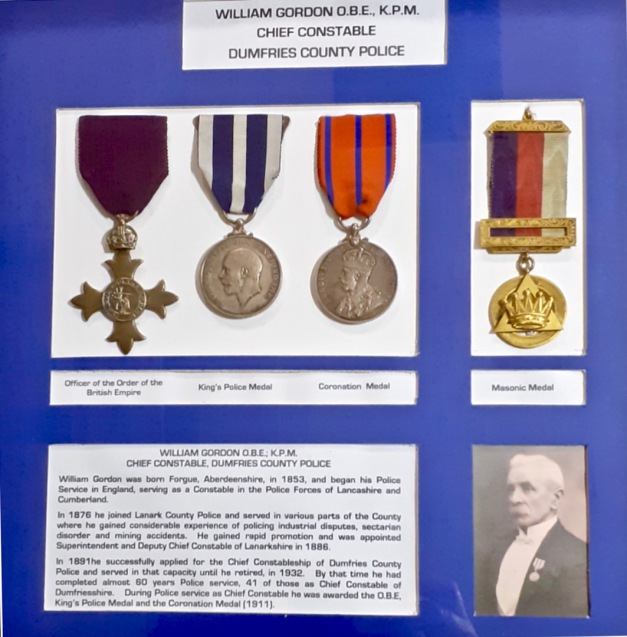 An image of the medals awarded to Chief Constable William Gordon, OBE, KPM whilst serving with Dumfries County Constabulary.

It is likely that he joined the police in Lancashire within the following two years.

On 7 June 1876, at Causewayend, Huntly, after Banns according to the forms of the Church of Scotland, William Gordon, (22), a Police Constable of the Police Station, Lanark, married Jane Sey, (26), a Domestic servant of Causewayend, Huntly.

On the night of the Census 1881, William and Jane were living at 30 Beckford Street, Hamilton, Lanarkshire. Those living at the address that night were:

*Jane Gordon was born on 31 January 1872 at Insch, Aberdeenshire. Her mother was Jane Sey and her father, William Gordon.

The couple’s youngest child, Maggie (Margaret), a daughter born in 1881, had not been named by the date of the Census that year.

In the Census of Scotland 1891, William, Jane and their family were living at 120 Kirk Road, Wishaw, Lanarkshire.

In the Census of Scotland 1901, William, Jane and their family were now living at 20 Catherine Street, Dumfries and he was the Chief Constable of Dumfries County Police.

In the Census of Scotland 1911, William, Jane and Margaret were living at ‘Lauriston’, Maxwelltown, Kirkcudbrightshire. His occupation was ‘Chief Constable, Dumfries County Council’.

The 1911 Census was the first to require married women to state how long they had been married, how many live births they had experienced and how many of those children were still alive at the date of the Census. It was a controversial requirement and many Suffragists and Suffragettes refused to complete the Census data.

Jane Gordon recorded that she had been married for ‘40 years, had given birth to six children, four of whom were still alive in 1911’.

The following is the full article taken from the ‘Motherwell Times’ of Friday 3 June 1932:

A remarkable family record is recalled by the retirement on Saturday of Mr William Gordon after 41 years’ service as Chief Constable of the County of Dumfries.

Four brothers of this family were all police officers, and all are now retired from the service.

Each of them began police duty with the Lanarkshire Constabulary, and two of them, Mr James Gordon and Mr George Gordon, completed their full term of service in the county, retiring with the rank of Sergeant.

Mr Andrew (sic) Gordon went to South Africa some years ago and retired from the police force there while he was holding the post of Inspector. He is home now and living in this district.

Mr William Gordon, who has just retired, was the ‘Father” of the Chief Constables of Scotland, his total service extending to almost 60 years.

It is of interest to note that it was Mr James Gordon who 43 years ago, captured at Ferniegair, John Watson Laurie, the Goatfell Murderer, whose death in Perth Penitentiary occurred in October 1930.”

William (Senior), Jane, Lizzie and Maggie are buried in section A, Plot 74 of Troqueer New Burial Ground, Dumfries. Jeanie is buried along with her husband, Robert Thomson, in St Michael's Cemetery, Dumfries. I have not yet found a record of George or Alexander Gordon’s deaths.

The medals awarded to William Gordon, OBE, KPM, can be seen at the Dumfries and Galloway Police Museum in Dumfries. A selection of Dumfriesshire Constabulary insignia can be seen below courtesy of the late John C. Green's book, 'Scottish Insignia, as used by old Police Forces'.

Thank you to Joe Craig, the Curator of the Dumfries and Galloway Police Museum for his assistance in compiling the above information on Chief Constable William Gordon, OBE, KPM, and his family. 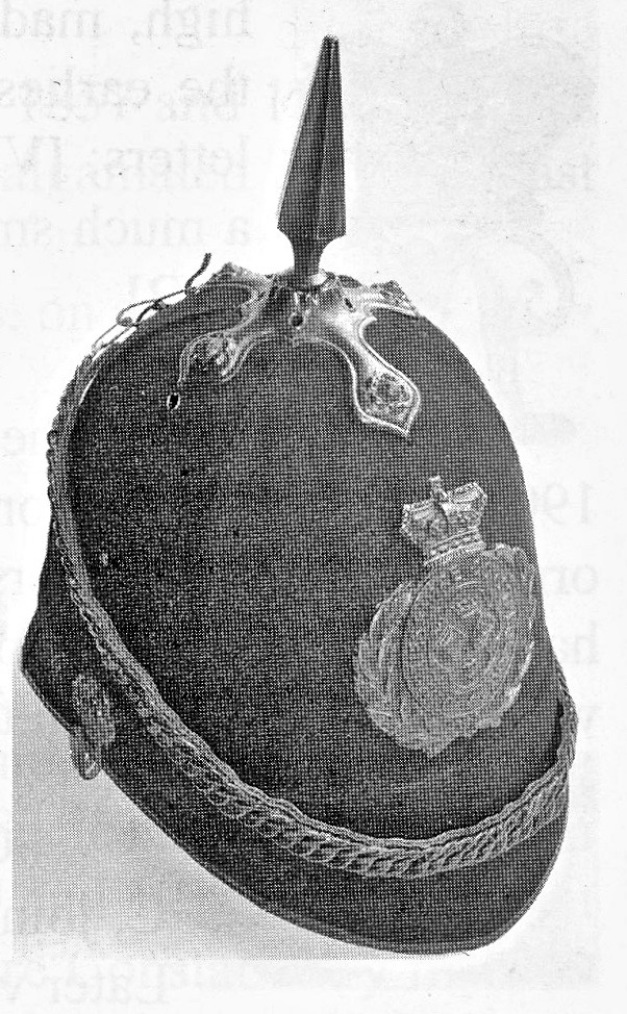 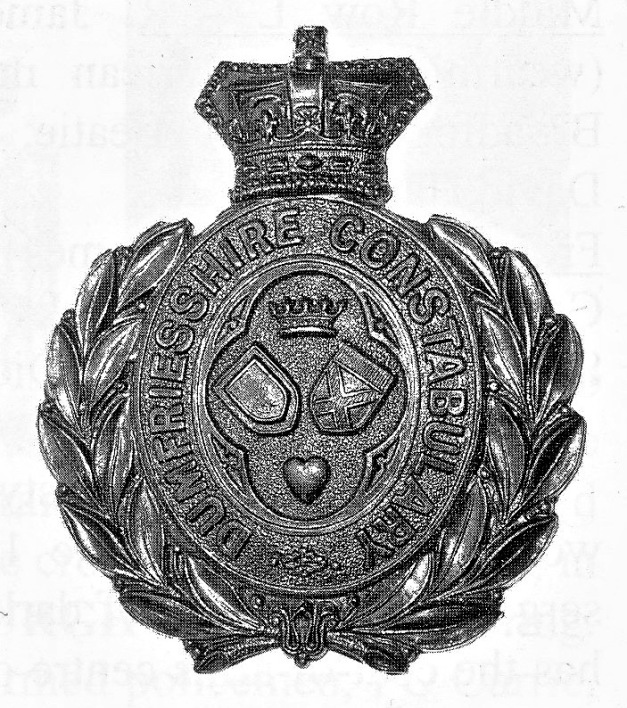 This is the type of Victorian helmet plate on the helmet above. 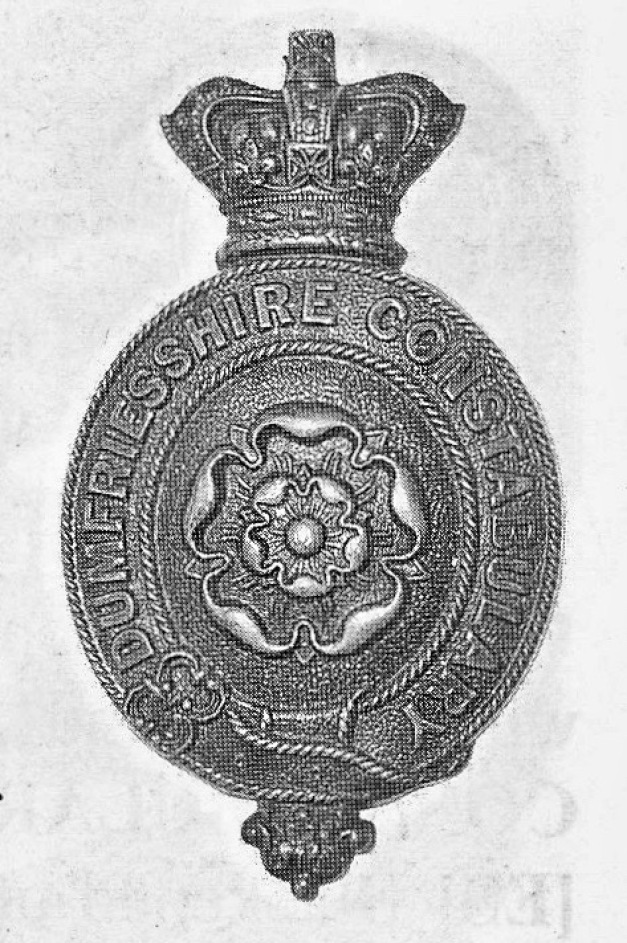 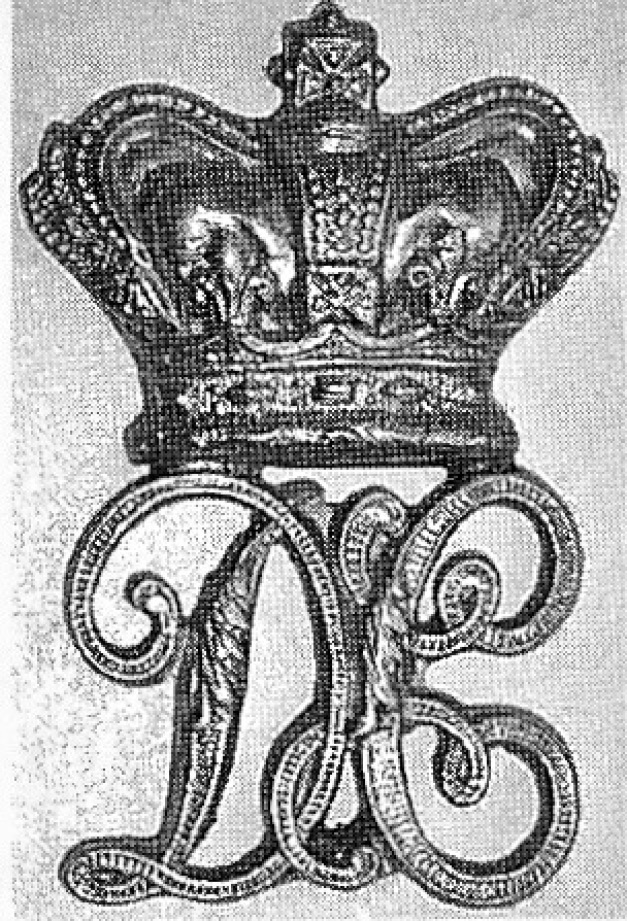 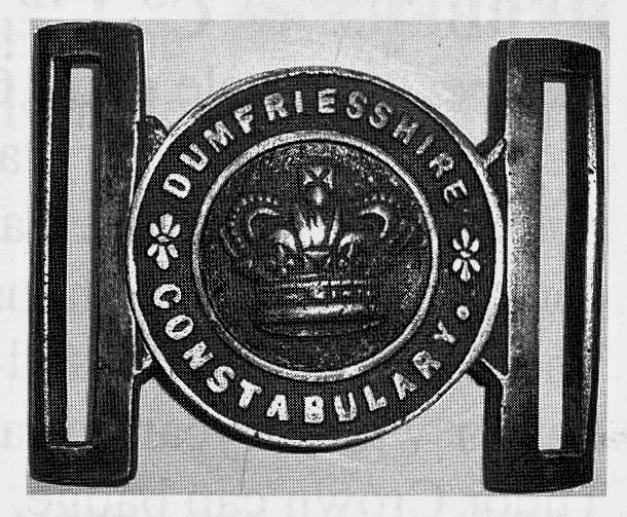