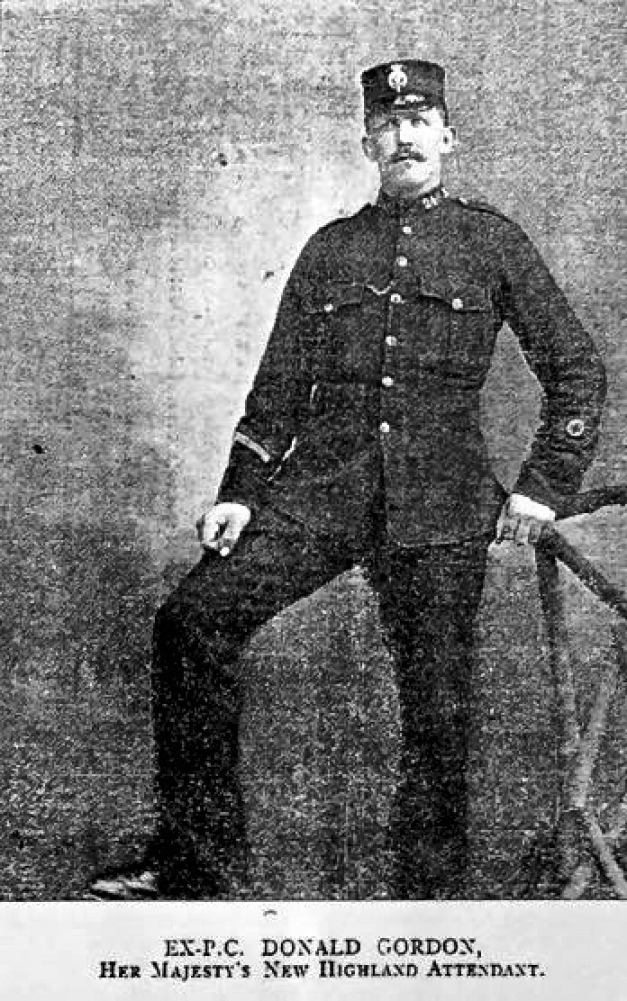 PC Donald Gordon, Lanarkshire Constabulary, on his appointment as Highland Attendant to HM Queen Victoria in 1900.

Donald Gordon was born on the 30 October 1871 in Abergeldie near Crathie in Aberdeenshire, approximately three miles from Balmoral Castle. The Abergeldie estate was leased by the Royal family from 1848 until the 1960’s.

His family worked on the Royal Estate. His father was one of Queen Victoria’s personal attendants at Balmoral and worked in the sawmills on the estate.

Prince Albert and Queen Victoria were determined to improve the working and living conditions of the people within the Estates and Prince Albert commissioned a school at Girnoc. It was at this school that Donald received his education.

His education was to an extremely high standard and he was selected to attend university, however his elder brother had previously attended university and due to the stress and strains of study became unwell.

Donald decided that university was not for him and he initially worked on the estate with his father.

He worked for the Royal family on the Balmoral estate as the Queens Mounted Messenger for 7 years.

In 1896 he sought experience and challenges further afield and travelled to Lanarkshire where he joined the Lanarkshire Constabulary. He was stationed at Motherwell and lived in the police barracks.

He served in Motherwell for four years until, in 1900, his father retired as Highland Attendant to Queen Victoria. Donald was approached by the Royal Household and was appointed to replace his father.

On Thursday the 6 October 1900 he was summoned to Balmoral where he appeared before Queen Victoria and officially appointed as her Highland Attendant. He started his official duties on Wednesday the 12 October 1900. 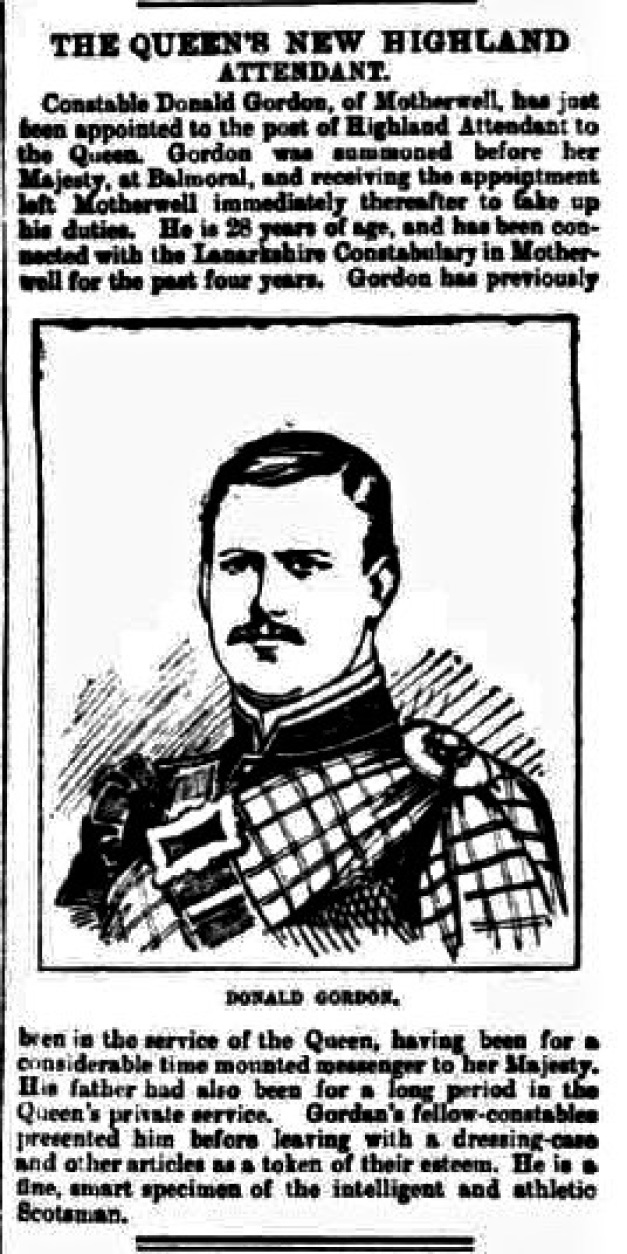 On Monday the 10 October 1900, a presentation took place at Motherwell Police Station where over 50 police officers were in attendance. Sergeant George Gordon presided, and Superintendent Moir presented Donald with a handsome dressing case, gold mounted umbrella, silver mounted pipe, tobacco and pouch, the umbrella and pipe were both inscribed with word of good luck from his colleagues. It is a testament to his popularity that such generous gifts were presented to him.

Superintendent Moir paid great tribute to Donald as a fine police officer who had great respect from colleagues and the public. He regretted the loss of Constable Gordon from the force but rejoiced in the fact that he had been given such a great honour by Her MajestyQueen Victoria.

Constable Gordon replied by thanking his colleagues and friends for the gifts that they had given him. He said that his connection with Motherwell had been a happy one and he had made many good friends.

At the end of the ceremony hos colleagues escorted him to Motherwell Railway Station where he left for Balmoral.

“Constable Donald Gordon is a young man of exemplary character, good education, fine physique,  and is known to posses not only a strict sense of duty, but a strong spirit of loyalty and patriotism, all of which are splendid qualities in a man chosen to fill such an important position as that to which he has been called. He was a member of the County tug-of-war team and at the police sports was a competitor in the light-weight wrestling events, has won prizes on the cycle track and was an expert in the gymnasium. During his stay in Motherwell, Constable Gordon was a great favourite with the general public and with his fellow Constables who, besides congratulating him on the honour that has been bestowed upon him, feel honoured themselves that one of their comrades should have been chosen for such a high position.”

Unfortunately, Donald Gordon did not have particularly long as Highland Attendant. Queen Victoria died on the 22J anuary 1901 at Osborne House on the Isle of Wight.

He attended the funeral of the Queen on the 2 February 1901 walking behind the coffin. 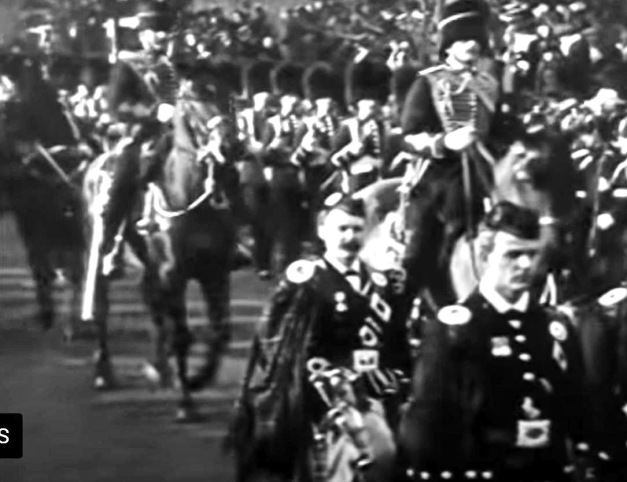 Donald Gordon is the man in highland dress to the bottom right of the picture walking behind the gun-carriage carrying the body of the late HM Queen Victoria. The mounted troops are the Royal Horse Artillery.

Shortly after the funeral he was awarded the Royal Victorian Medal by King Edward VII for services to Queen Victoria. He was also given a similar award by Kaiser Wilhelm II, the grandson of Queen Victoria. (Please see the pictures below). 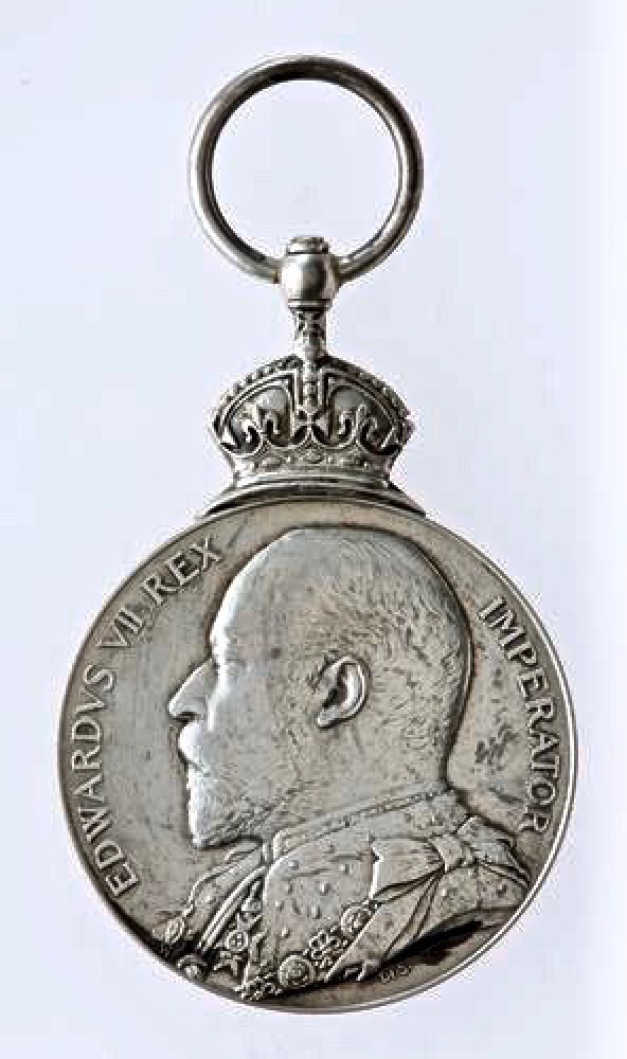 The Medal of the Royal Victorian Order (RVO) awarded to Donald Gordon by King Edward VII for his services to the late HM Queen Victoria. (Obverse View). 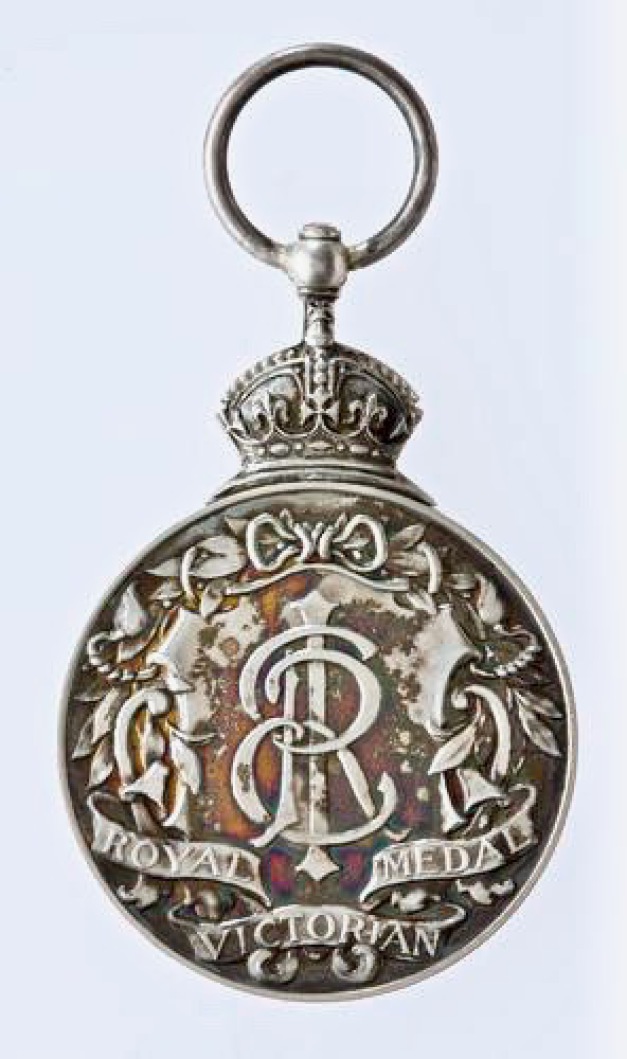 The Medal of the Royal Victorian Order (RVO) awarded to Donald Gordon by King Edward VII for his services to the late HM Queen Victoria. (Reverse View).

In November 1901 he returned to Motherwell to visit old friends and colleagues. It is thought that this visit may also to be to test the waters for a return to Constabulary duties.

Donald remained in service at Balmoral until February 1902 when he applied to rejoin Lanarkshire Constabulary. He was accepted back to the force following a personal appeal to the commissioners of police, on the 4 February 1902, by the Chief Constable, Captain Despard. He was over the age for the appointment of a Constable however his previous service and approval of the commissioners allowed the re-instatement to take place.

He was re-instated on Monday the 24 February 1902 and stationed at Hamilton. He found lodgings at 62 Lorne Street, Hamilton. 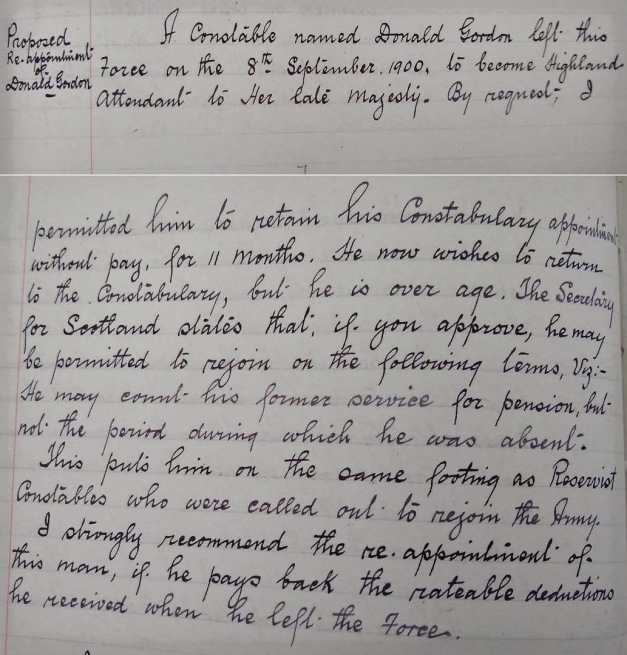 On the 7 October 1903 Donald married Joan Jackson Laird of 4 Murray Place, Crossgates, Bellshill. The ceremony took place at that address.

The couple were provided with housing at 17 Almada Street, Hamilton which was near to the police office.

They remained there until 1906 when they moved to 13 Saffronhall Crescent, Hamilton. On the 6 September that year their first child, Agnes Elizabeth, was born. Their second child, George Cameron Gordon was born on the 8 August 1908 at the home address.

Prior to the birth of his second child Donald, was promoted Sergeant and appointed the personal clerk to Chief Constable Despard.

In July 1912 Donald became unwell and had to be admitted to the Western Infirmary in Glasgow. He underwent surgery however he suffered cardiac failure because of acute retention of urine in his kidneys causing severe infection. He was 40 years of age.

He was fortunate enough to have saved a considerable amount of money and possessions. His estate, in cash, amounted to just over £595. That would be the equivalent of £47,515 today.

This article was published with the kind permission of George Barnsley and the Lanarkshire Constabulary Historical Society (LCHS). The LCHS has a comprehensive website covering all the former Burgh forces and can be found at the following link:http://www.lphs.org.uk/