After collecting the King Edward VII Police Medal (Scotland), 1903 (more commonly known as ‘The Visit to Scotland Medal’) and the King George V Coronation (Police) Medal, 1911 with the ‘Scottish Police’ reverse for a few years, I began collecting one example of each of the ten reverse types of the 1911 medal.

I already owned a few of the types and one or two of the others were easily found but the Royal Irish Constabulary (RIC), Police Ambulance Service and Royal Parks examples proved to be more elusive as well as more expensive.

Having acquired one of each type, I set about identifying the recipients of the nine named examples, the RIC medal being issued un-named.

I compiled a Medal Roll [i] for the ‘Scottish Police’ recipients using force records and articles from the ‘Police Review and Parade Gossip’ [ii]  newspapers of 1912. This resource also enabled me to identify the ‘County and Borough Police’ example from Manchester.

Using the Census of England, 1911, I identified most of the others since they had a fortunate combination of identifiable titles and unusual names. All ten types (and the full biographies of their recipients) can be seen online. [iii]

I looked for a Medal Roll for ‘Royal Parks’ medals and quickly discovered that no definitive source existed except those compiled from sources such as those listed above, auction records and online fora.

The 1911 Census showed that many of those employed by His Majesty’s Office of Works were listed as ‘sergeants’, ‘gate Keepers’, ‘park keepers’, ‘gardeners’ or ‘garden labourers’ and it was difficult to identify compile a reliable list. Medal Year Book, (2016) [iv] stated that 119 medals had been awarded with the ‘Royal Parks’ reverse but the number of Office of Works employees recorded in the London Census far exceeded that number.

Using the 1911 Census, I did manage to identify my ‘Royal Parks’ medal to George Sutton Yeomans, an ex-soldier in the 83rd (County of Dublin) Regiment of Foot, later the Royal Irish Rifles. [v]  Yeomans was also ‘Granted Silver Medal for Long Service and Good Conduct and Gratuity of £5” on “30 June, 1885.’ [vi]

(This is his only other medal entitlement from his Army service and it would be very helpful if its present custodian were to get in touch with me via the OMRS.)

I had previously used The National Archives (TNA) for researching the ‘Scottish Police’ medals and in order to attempt to identify an accurate medal roll for the Royal Parks, I decided to research the Office of Works files there.

Living in Scotland, visiting TNA necessitates a degree of planning and I began by identifying Office of Works files using their ‘Discovery’ search engine. In doing so, I listed a number of files relating to personnel, park buildings, Royal Visits and Coronation Medals and pre-ordered them online prior to my visit.

The first file I looked at was a Royal Mint file dated 1912 - 1913 concerning the ‘Coronation Medal, King George V: Park Keepers and Gate Keepers in Royal Parks.’ [i]

The contents had no list of names but did confirm that the total numbers awarded were 109 in London and 11 in Holyrood Park, Edinburgh, making a total of 120.

The next file was from His Majesty’s Office of Works dated 1911 – 1912 and described as ‘Coronation Honours. Coronation Medals. Police Medals.’ [ii]

The correspondence identifies the eligibility for receiving the ‘Royal Parks’ Coronation Medal and list the 109 intended named recipients in the London Parks and the 11 names of the Holyrood recipients. One of the London lists identifies the parks at which the men worked. [iii]

The list that was sent to the Royal Mint for the information of the engraver is also present. [iv]

Since I last wrote to you I have had an opportunity of talking to Henry who tells me privately that, if it were referred to him, he should certainly welcome the suggestion that the Park-keepers in the London Parks and at Holyrood should be given the Police medal.

The Sergeant Park –keeper at Holyrood, Duncan, who is a man of exceptional ability and energy, ought, I think, to receive the Coronation Medal. His men were on duty for 16 or 17 hours out of the 24 during the King’s Visit: he was on duty even longer, and I should be extremely glad if his name could be placed before the King.

The reply dated 4 August, 1911 came from ‘H. M. Yacht Victoria & Albert’ and was addressed to ‘The Honourable Sir Schomberg McDonnell, C.C.V.O.’ and stated:

The King has approved of the Park-keepers in London, Holyrood and Dublin receiving the Police Coronation Medal. I have told the Home, Scottish and Irish Offices.

With reference to your suggestion that the Sergeant Park-keeper at Holyrood should receive the King’s Coronation Medal I am afraid it is out of the question.

The whole of the Scottish Army are panting for Medals and already they have been very much disturbed by the grant of 2 Medals to Officers.

He must be content with the Scottish Police Medal.

Eligibility criteria for the medal was further clarified in a copy of a letter to the Home Office dated 22 August, 1911 which stated that:

It is recommended that, so far as this Department is concerned, the Police Medal should be granted to Sergeants, Gate Keepers and Park Keepers of Regent’s, Hyde, Green, St. James, and Holyrood Parks and Kensington Gardens and a list of the men is enclosed.

Those serving in Bushey, Richmond and Greenwich Parks, Hampton Court and Osborne, are not to receive the medal: nor anyone who has already been granted the Coronation Medal…

The Holyrood List has been furnished to the Scottish Office at their request.

Buckingham Palace was quite emphatic that no person should receive two medals and this is confirmed in a letter dated 1 February, 1912 to “The Honourable Sir Schomberg McDonnell, C.C.V.O.” from “F.E. Ponsonby” in which he states:

I hear that one of the Head Park Keepers is a Yeoman of the Guard and as such has already received a Coronation Medal. I think his name is Albert Scraggs.

Will you therefore see that his name is taken out of the list, as the King does not wish anyone to receive two medals?

In total, there are three lists of names in this file. [ii] The first, pages 64 – 66 also contains the Holyrood Park List.

Appended in pencil at the bottom of the list on Page 84 is the name of ‘Inspector William Graham Davis, HM Office of Woods’ [iii] and I believe he is the 109th name on the medal roll. His name does not appear on any of the other Royal Parks lists but this would account for the discrepancy between there being 108 London Royal Park Keepers names on the lists and the final bill being for 109 medals.

William Graham Davis was born on 20 July, 1866 in Guildford in Surrey.

He joined the Royal Navy on 1 September, 1881 at HMS Impregnable. He served on HMS Magpie during the Boer War and was awarded the Queen’s South Africa Medal[iv].

He was a Petty Officer, Gunnery Instructor on HMS Gleaner, a Torpedo Gun Boat based at Gravesend in Kent in 1900 and still there in the Census the following year[v].

When he married Annie Maud Isabella Prockter on 15 August, 1900 at St Mary’s, Hornsey Rise in the Parish of Islington, his occupation was the same[vi].

In the Census of England, 1911, he and ‘Minnie’ (Maud) were living in Regent’s Park at West Lodge, Park Crescent, London. His occupation was ‘Naval Pensioner, Inspector, (in) Regent’s Park’[vii].

The Three Lists of Names

The list on pages 93 -94 are particularly helpful in that they identify the London parks in which each man worked. I copied all the lists, compared them and verified that they were identical.

I then compared the London list with the 1911 Census of England and identified the first and middle names of the recipients. In doing so, I identified 13 anomalies in the data recorded. For the sake of historical accuracy, I have listed the variances in the ‘Remarks’ column in the Medal Roll below.

The result of that effort is the Medal Roll below. 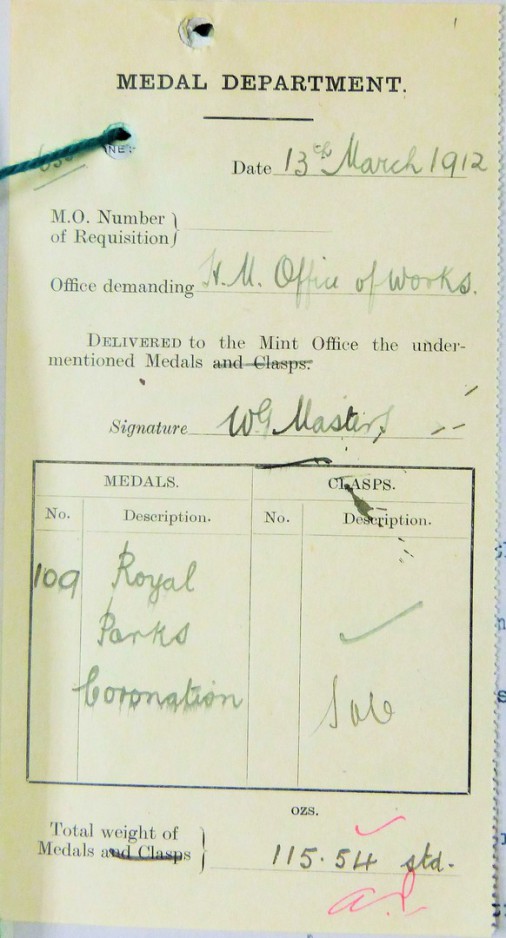 The Cost of the London Royal Parks Medals

…I am directed by the Master of the Mint to forward herewith an account of the expenses incurred by this Department in connection with the supply of one hundred and nine Coronation Medals for Park Keepers, which were forwarded on 14th instant, and to request that the amount due, viz. Seventeen Pounds, one shilling and ten pence, may be paid before the 31st instant, if possible.

The invoice details from the Royal Mint dated 18 March, 1912 [ii]  for the London parks medals is recorded below: [iii]

The Total Cost of the Holyrood Parks Medals

In a letter from the Treasury to the ‘First Commissioner of Works’ dated 26 October, 1912, ‘Robert (Macauley?)’ wrote:

I am directed by the Lords Commissioners of His Majesty’s Treasury to state that They are informed by the Secretary for Scotland that the charge of the Mint for the manufacture of the medals issued to the Park Keepers of Holyrood in commemoration of the visit of Their Majesties to Edinburgh in 1911 amounted to £1.14.11.

My Lords are of opinion that, unless you see objection, this sum should be paid from the Vote for Royal Parks and Pleasure Gardens, and They authorise its charge to that Vote accordingly.

The Total Cost of the London & Holyrood Royal Parks Medals

The total cost to the Office of Works of the 120 King George V Royal Parks Coronation Medals was £18.16/9d.

I am aware that in the past, Royal Parks Medal Rolls have been compiled from a number of sources and published, providing a valuable service. The previous known total was believed to be 119 medals for London and Edinburgh.

My research has identified an authoritative source; the original His Majesty’s Office of Works correspondence identifying all relevant documentation regarding Coronation (Police) Medals to Royal Parks staff. [v]

As a result of my research, the number of medals are confirmed as 109 in London and 11 in Edinburgh. The names of all the recipients, (including Inspector Graham Davis of HM Office of Woods, not previously recorded) are verified by official documentation. Some insightful period background detail has emerged and the total cost of the 120 medals, £18. 16/9d, corroborated by original documents.

I believe it will be a useful resource to fellow collectors and enable them to research their own medals in more detail.

I also found an article from ‘The Scotsman’ [vi] newspaper published in Edinburgh on 30 May, 1912 that records the presentation of the medals to the Park Keepers at Holyrood Palace the previous day. [vii]

The article gives biographical details of each of the men and includes their previous service in the Navy and Army. I have researched the early careers of the 11 Holyrood Park recipients and hope to publish that material in the future.