William McNair was born on 28 November 1876 in the Village of Cawdor in the County of Nairn. His father was Thomas McNair, a Shepherd and his mother, Ann McDonald or McNair. His parents were married on 16 December 1864 in Inverness.

William was a shepherd before he joined Edinburgh City Police (ECP) in 1901. He married Jane Shaw in Edinburgh in 1904. He resigned to join the Army in 1915 and served as a Pipe-Corporal in the Royal Scots. He rejoined ECP in 1919. He may have been a member of Edinburgh City Police pipe band before the war, but he was certainly a member afterwards.

William was stationed in the West End, at that time, D Division of Edinburgh City Police. He retired in in 1931 having spent all his service in the same division.

What follows is a record of William McNair’s life extracted from public records. There are always minor discrepancies in such records, and I have transcribed them as they are recorded.

PC 535D William McNair in 1921. He is wearing the ribbons of his medals in the order he was awarded them.

The following were living at Knockandubh Shepherd’s House Cottage in the Parish of Cawdor in the County of Nairn on the night of the Census of Scotland 1871.

The following were living at Achagour Cottage in the Parish of Ardclach in the County of Nairn on the night of the Census of Scotland 1881.

The following were living at Dalcharn in the Parish of Cawdor in the County of Nairn on the night of the Census of Scotland 1891.

The following were living at the Gardener’s Bothy, Holme Rose in the Parish of Croy and Dalcross in the County of Inverness on the night of the Census of Scotland 1901.

Shortly after the Census, William McNair moved to Edinburgh and joined the City Police.

He was described as being “5’ 9.5”, with dark hair, grey eyes and a dark complexion. His previous occupation was ‘Shepherd’.  He was given the collar number 535 D and posted to the West End, then D Division with stations at Torphichen Place and Gorgie.

It was probably soon after that William joined the police pipe band.

William McNair was on duty for the Royal Visit of King Edward VII and Queen Alexandra in 1903. All of the Edinburgh City Police were awarded the King Edward VII Police (Scotland) Medal 1903. The medal is better known as ‘The Visit to Scotland Medal’. He can be seen wearing the medal ribbons and medals in the pictures below.

On 11 November 1904, at 25 Saxe Coburg Place, Edinburgh, after Banns according to the Forms of the United Free Church of Scotland, William McNair, (27), a Police Constable of 9 Orwell Terrace, Edinburgh, married Jane Shaw, (23), of 7 St Colme Street, Edinburgh.

William’s parents were Thomas McNair, a Shepherd and Ann McDonald or McNair. Jane’s parents were John Shaw, a Blacksmith and Margaret Nicholson or Shaw.

The witnesses were Thomas McNair and Lizzie Shaw, and the ceremony was performed by George Steven.

King Edward VII died in 1910 and a representative group of Edinburgh City Police officers, including Chief Constable Roderick Ross, attended the funeral in London. The following year, King George V was Crowned and later that year, visited Scotland with Queen Mary. Once again, all the Edinburgh City Police were awarded the King George V Coronation (Scottish Police) Medal 1911 and William McNair can be seen wearing the ribbon and medal in the pictures below.

The records of Edinburgh City Police show that PC 535D William McNair “Resigned for the purpose of joining the Army” on 31 May 1915. 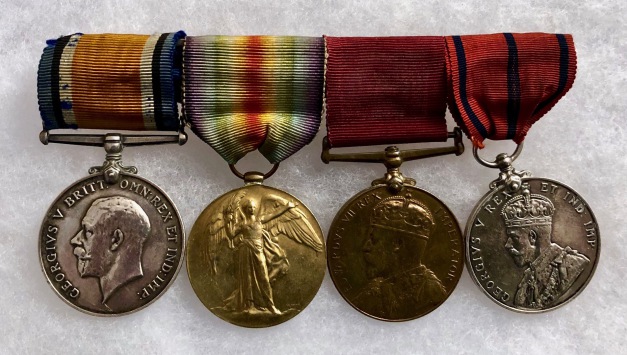 This is a similar group of medals to those awarded to PC William McNair. From left to right, British War Medal, Victory Medal, 1903 Medal and 1911 Medal.

It is not confirmed, but I believe he was Private No. 53166 in 13th Battalion Royal Scots, part of the 45 Brigade, 15th (Scottish) Division in France and Belgium. The 13th Battalion took part in many of the major offensives and battles from Loos in 1915 through to the end of the war. At the end of the war, William was a Pipe-Corporal in the Battalion Pipes and Drums.

William continued to work in the Murrayfield district of west Edinburgh and played in the pipe band for many years. 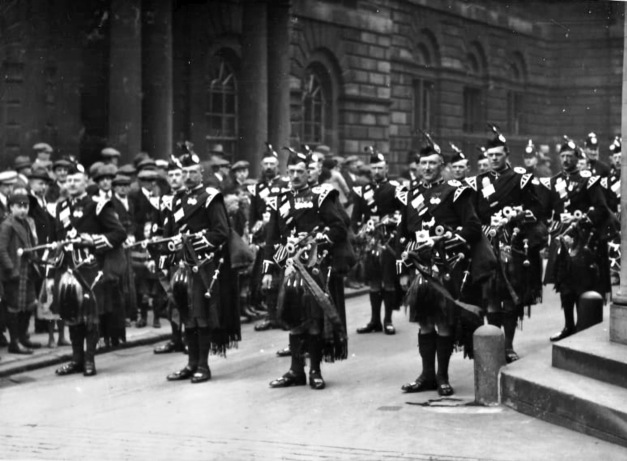 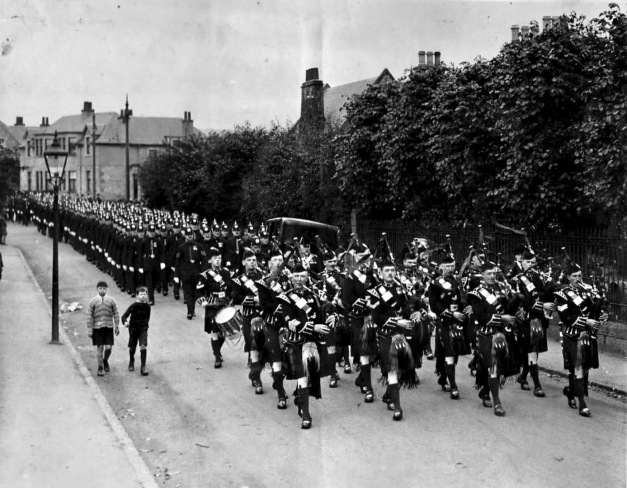 The End of The Story

A newspaper cutting from 1931 records the following:

Ex-Constable William McNair, Western Division of Edinburgh City Police, who recently retired on pension after 30 years’ service, was met by a representative gathering of his colleagues in Gorgie Police Station and presented with a gold watch and albert, and a gold wristwatch for Mrs McNair.

The presentation was made by Superintendent A. Finlay Low, who referred to Mr McNair’s long and faithful service, all of which was performed in the Murrayfield district.

Mr McNair was a member of the City Police Pipe Band for many years.”

I am grateful to Stewart Gardiner for the pictures of Edinburgh City Police Pipe Band. 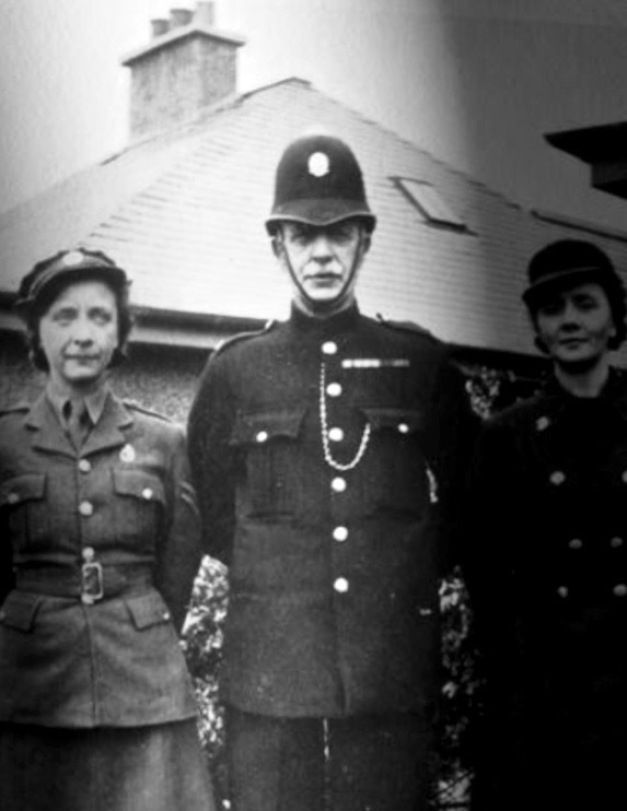 PC 535D William McNair towards the end of his service. 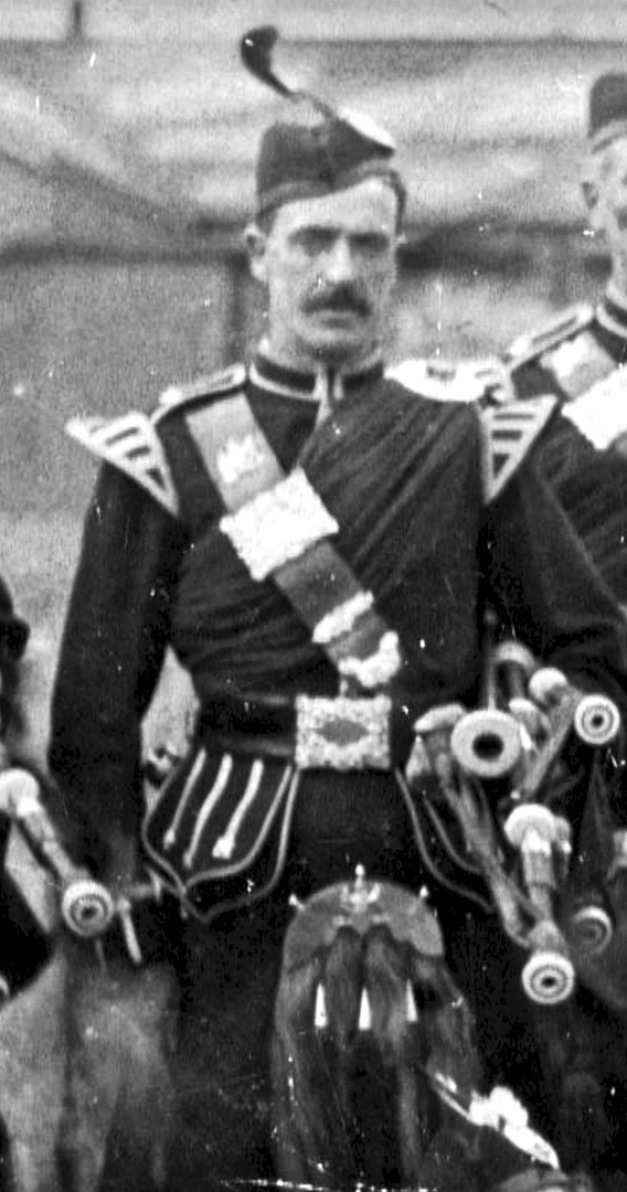