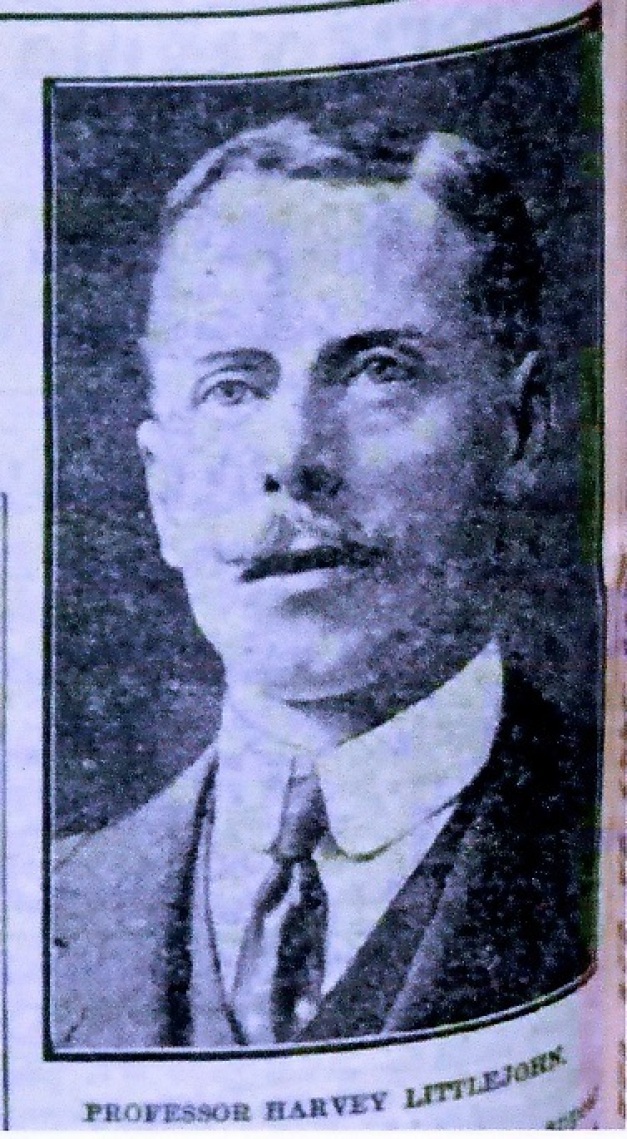 Henry Harvey Littlejohn was listed in the 1903 Medical Register for the United Kingdom living at 1 Atholl Crescent in Edinburgh. It records that he graduated from Edinburgh University in 1886 as a Bachelor of Medicine (M.B.), Master of Surgery (Mast. Surg). He subsequently qualified as a Bachelor of Science (Public Health) (B.Sc. Public Health), also at the University of Edinburgh.[i]

He was born on 7 October, 1861 at 40 York Place in Edinburgh and was the son of Dr Henry Duncan Littlejohn. His mother was Isabella Jane Harvey or Littlejohn. His parents were married in London on 6 August, 1857.[ii] He was born the year before his father’s appointment as Medical officer of Health and Surgeon of Police for the City of Edinburgh.

Harvey Littlejohn was educated at Edinburgh Academy from 1873 to 1877 and then Edinburgh University from where he graduated with the degrees of Master of Arts, Bachelor of Medicine and Bachelor of Science.[iii] He was a Fellow of the Royal College of Surgeons, Edinburgh, the Royal Society of Edinburgh and a former senior President of the Royal Medical College.[iv] After completing his M.B. degree, he spent some time as Resident Physician in the Maternity Hospital before continuing his education in Vienna, Paris and Berlin.[v]

From 1888 to 1891, he assisted his father in the teaching and practice of medical jurisprudence in Edinburgh.

In 1891, he was appointed the Medical Officer of Health for the City of Sheffield, a post he held until 1897.[vi]

There are numerous newspaper reports of his performing post-mortems on the behalf of police forces throughout Edinburgh and the Lothians and it is clear he was acting as a Police Surgeon for Edinburgh City Police during this period.[viii]

Like his father, he was a Surgeon of Police for Edinburgh City Police when he was presented with the King Edward VII Police (Scotland) Medal, 1903 for his services during the Royal Visit to Scotland that year. The medal was presented to him at a ceremony in Royal Exchange Square, Edinburgh in March, 1904.[ix]

In 1906, Henry Harvey Littlejohn succeeded his father in the Chair of Forensic Medicine at the University of Edinburgh. At the same time, he was appointed Chief Police Surgeon of Edinburgh City Police.[x]

Harvey Littlejohn was for some time, the Dean of the Faculty of Medicine at Edinburgh University. He was also a Fellow of the Royal Institute for Public Health and a member of the following scientific societies: the Sanitary Institute, the Epidemiological Society, the Medico-Legal Society, the Society of Medical Officers of Health and the Society for the Study of Inebriety.[xi]

He was President of the Section for Forensic Medicine at the International Medical Congress in 1913.

During the First World War, he held the rank of Major in the Royal Army Medical Corps (Territorial) commanding the medical unit of the Officers Training Corps.[xii]

He published numerous papers and publications on forensic medicine and public health.[xiii]

Professor of Forensic Medicine, Dr Henry Harvey Littlejohn, (65), died on 15 August, 1927 at 19 Great King Street in Edinburgh. He was single and his sister, Jessie Harvey Littlejohn or Perry, registered his death.

Like his father, this account of Henry Harvey Littlejohn’s life fails to do justice to the breadth of events he was part of and I strongly urge readers to consult the British Newspaper Archives for more information.[xiv]