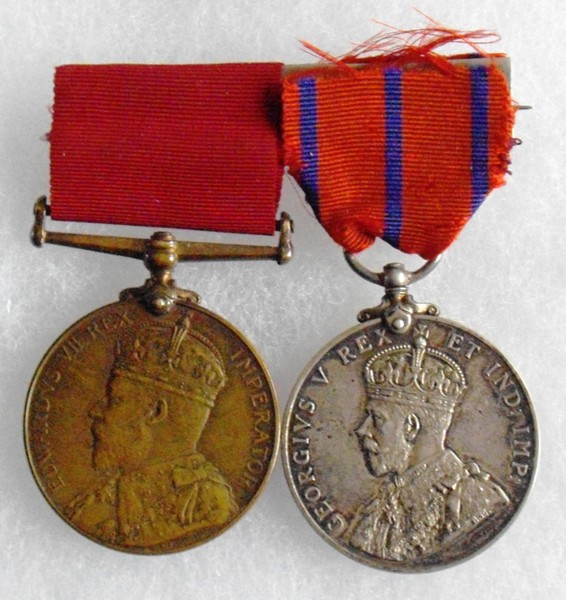 Peter Haig was born on 23 October 1861 near Jedburgh in the County of Roxburgh.

He was a Ploughman when he married Jessie Ellen Scott at Crailing in the County of Roxburgh in 1882.

He joined East Lothian Constabulary on 31 March, 1887 and was posted to Dunbar Police Station.

On 16 December, 1910, Police Sergeant Peter Haig of the Police Station, Tranent, married Christina Fairburn at Coldstream in the County of Berwick. 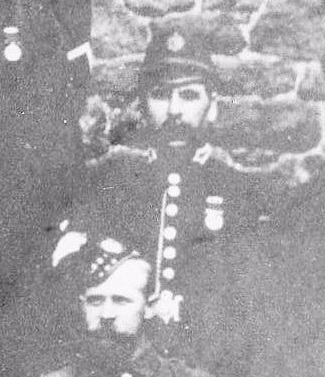 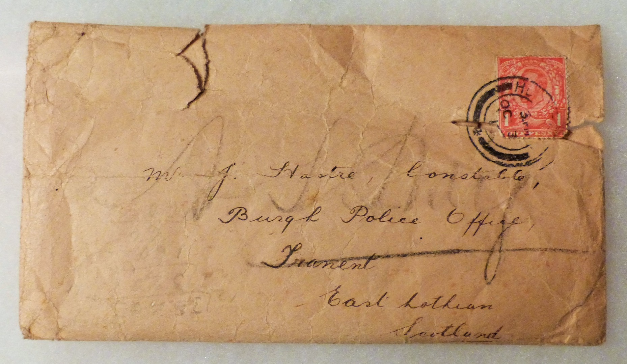 The envelope containing 1903 and 1911 ribbons addressed to PC John Hastie at Tranent Burgh Police office in 1912.

In an invoice dated 3 October, 1912, a ‘Military Contractor, Manufacturer and Warehouseman’ called A. C. Heath of 1-5 Barrack Road, Hounslow, London billed PC John Hastie of East Lothian Constabulary based at the Burgh Police Office in Tranent for “1 yard each of 1911 and 1903 Scottish Police medal ribbons @ 1/- a yard”.

The ribbon was enclosed in the brown envelope shown below addressed to PC Hastie at Tranent. Within the envelope was a smaller envelope addressed to ‘Sgt. Haig’ with the number ‘2’ presumably meaning the number of ribbons.

The actual ribbons can also be seen in the picture below.

It is possible PC Hastie did a bulk order for a few of the East Lothian officers? 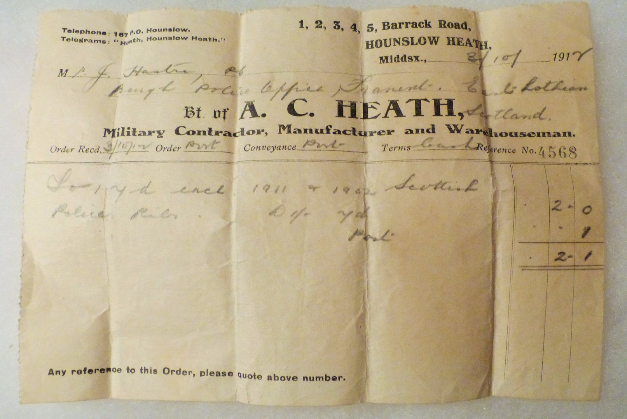 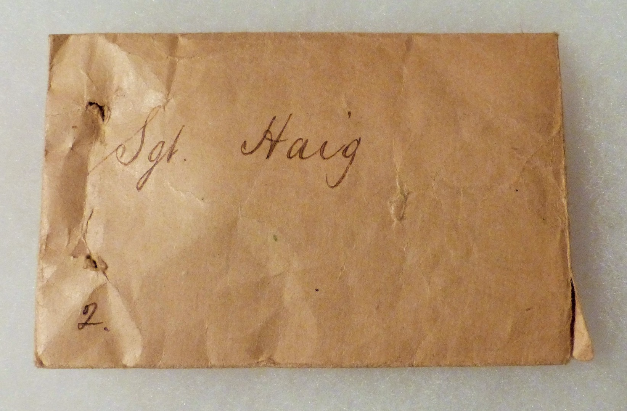 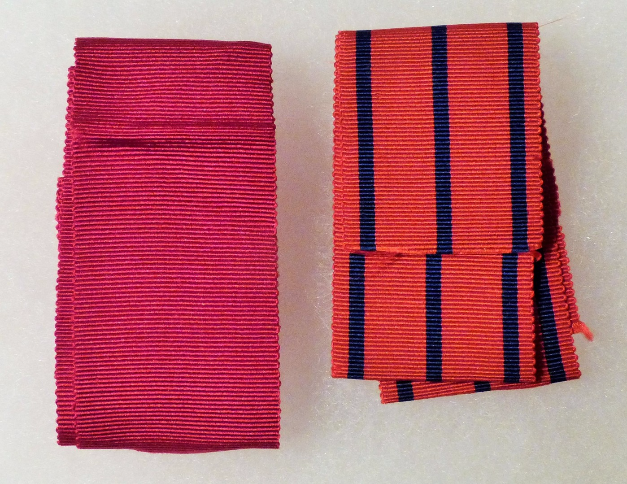 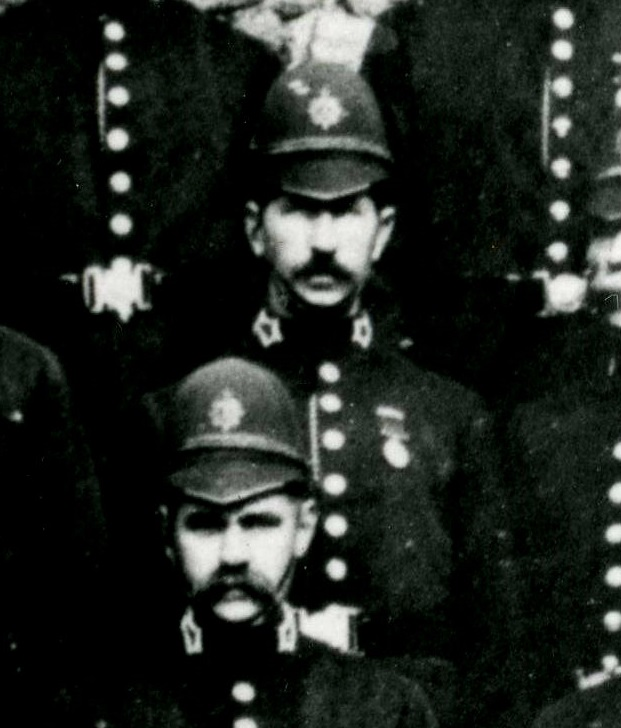 Alexander Harper was born on 31 January, 1864 at Bridgefoot of Boyndie in the County of Banff. His father was James Gordon, an ‘Agricultural Labourer’ and his mother, Ann Forsyth or Harper. His parents were married on 23 January, 1864 at Banff.

Mary Ann Gordon was born 3 October, 1863 in the Parish of Cabrach in the County of Aberdeen (but which is in Banffshire).

On 6 December, 1884, after Banns according to the Forms of the Established Church of Scotland, Alexander Harper, Farm Servant, (20), married Mary Ann Gordon, Domestic Servant, (20), at Silverford in the Parish of Auchendoir and Kearn in the County of Aberdeen.

On 22 November, 1889, Alexander Harper was appointed to East Lothian Constabulary as a 3rd Class Constable and posted to Ormiston Police Station.

It was in the County Police Station in Ormiston on 6 February, 1890 that Mary Jessie Gordon Harper was born.

The family were still there in the Census of 1891 and later that year, on 24 November, PC Harper was promoted to 2nd Class Constable.

He was transferred to Gifford in the Parish of Yester on 20 June, 1892. On 22 November that year, he was promoted to 1st Class Constable.

PC Harper was transferred to Gullane Police Station on 5 July, 1898.

In the Census of 1901, with the exception of Ann Thomson Harper, the rest of the family were now living at Hopetoun Place (Main door), Dirleton.

By the Census of 1911, only Alexander, Mary Ann, Maggie and James were living in Dirleton at 4 Hopetoun Place.

He retired on pension from East Lothian Constabulary “on completion of service” on 28 November, 1922. 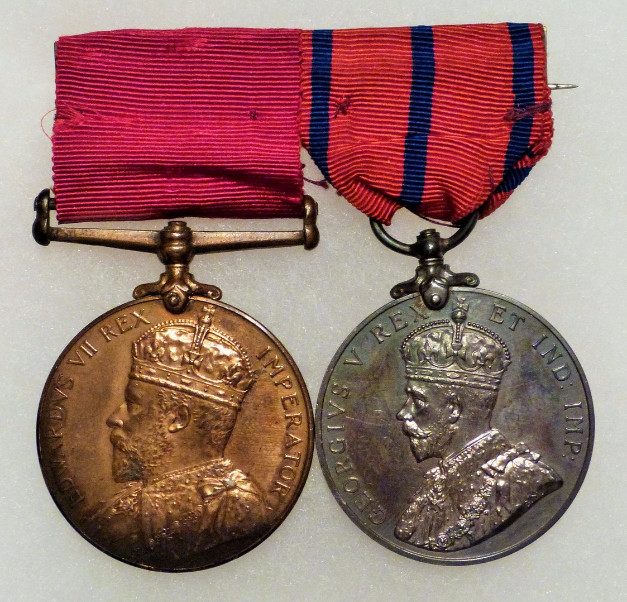 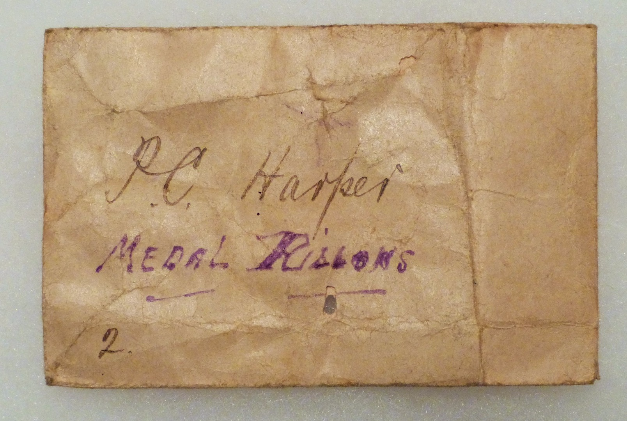 The envelope in which PC Harper received his spare medal ribbons from A. C. Heath in 1912. 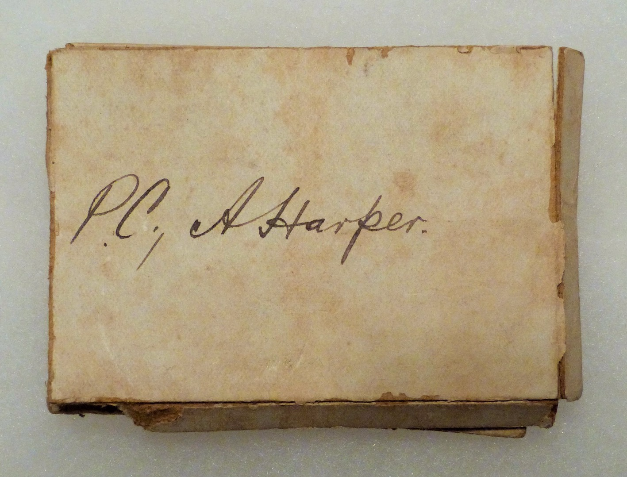 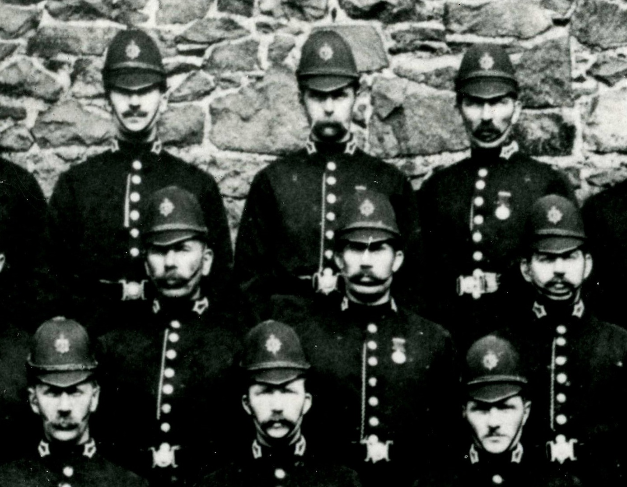 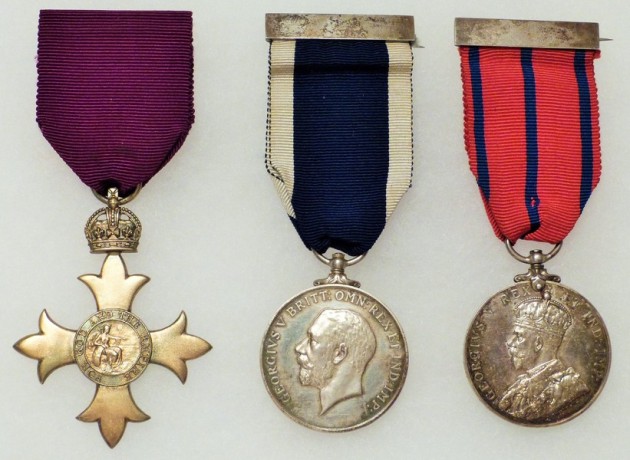 Officer of the British Empire (GVR)

James Tennant Gordon was born in Monymusk in the County of Aberdeen in 1865.

He joined Ayrshire Constabulary on 1 November 1884 and was promoted to Sergeant on 26 October 1891.

In 1895, he transferred to Hamilton Burgh Police as Inspector and Deputy Chief Constable.

Later that year, he was appointed Superintendent and Deputy Chief Constable of the County of Wigtownshire Police.

In June 1898, he was appointed Chief Constable of Banffshire Constabulary.

He was appointed Chief Constable of Fife and Kinross in December 1903. He commenced his duties on 16 January 1904.

After Local Government reorganisation in 1929, he ceased responsibility for Kinross when it was transferred to Perthshire.

James Tennant Gordon died in office while playing golf with the Provost of Cupar at Eden Sands Golf Course in St Andrew's on 24 November 1934. 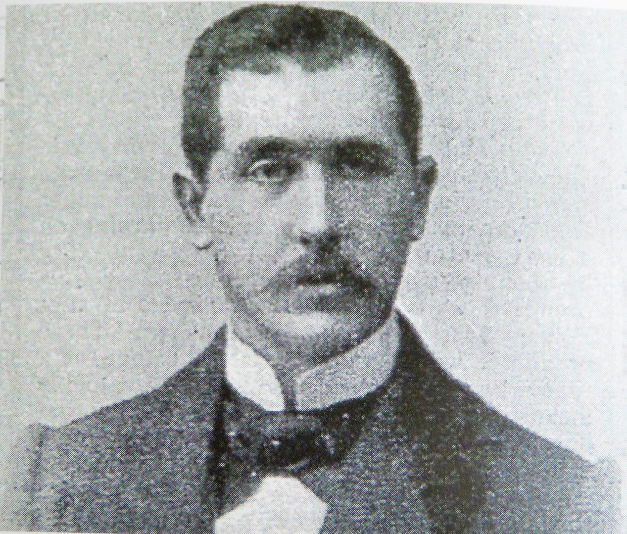 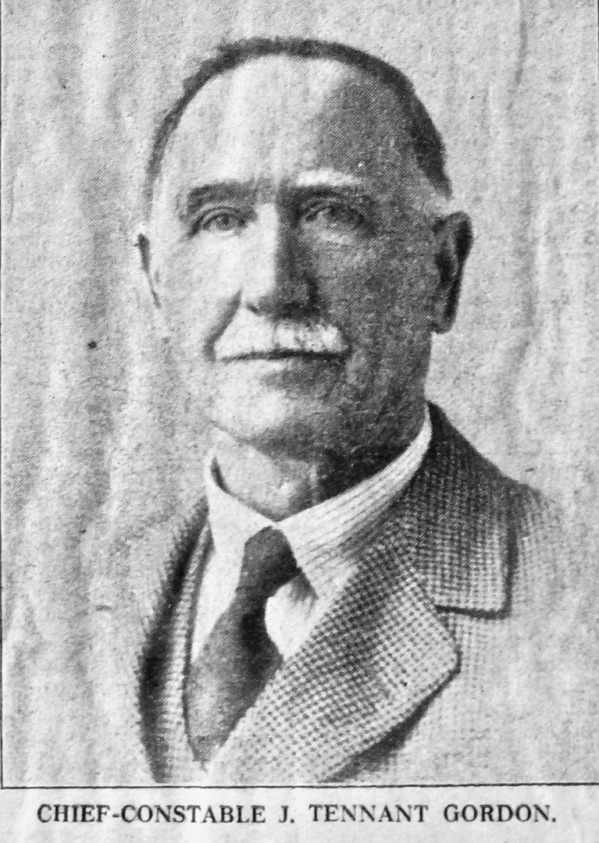 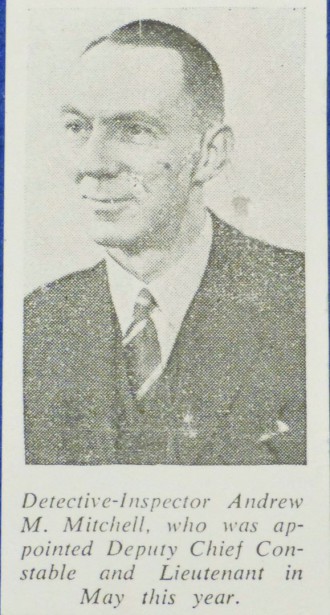 Andrew Mitchell was born at Colton of Pittencrieff Farm, Dunfermline on 26 March, 1896. His father, Ebenezer Mitchell, a Flesher worked for his brother-in-law, John Marshall, the owner of the farm. Andrew Mitchell’s mother was Janet Marshall or Mitchell.

There is no middle name on Andrew Mitchell’s birth certificate.

The family were still living at Colton of Pittencrieff in the Census of 1901 when Ebenezer’s occupation is ‘Butcher’.

By the Census of 1911, the family were living at 48 Golfdrum Street in Dunfermline. Ebenezer was still a Butcher, he and Janet had been married 18 years, had six live births together, all six children of whom were still alive at the date of the Census.

Andrew was 15 and working as a Butcher.

He was posted to France arriving on 16 December, 1915. He later served in the Royal Engineers and the Labour Corps in France.

According to the record of Special Constables appointed to Dunfermline City Police on 10 May, 1915, “Ebenezer Mitchell, a Labourer (in H.M. Dockyard, Rosyth) 47 and 5’ 9”” of 48 Golfdrum street, Dunfermline” was issued with “1 baton, 1 whistle and chain, 1 armband and 1 copy of instructions” for which he signed his name in the register.

Andrew M Mitchell was commissioned as a 2nd Lieutenant in the Labour Corps on 16 April, 1918.

An entry in his Police Personnel Record dated 21 December 1918, states: “While still serving in the (?) Army and having attained the rank of Lieutenant, he resigned his appointment as a Temporary Additional Constable.” This entry is also signed by “George Bruce, Chief Constable”.

Andrew Mitchell’s Medal Index Card (MIC) confirms his entitlement to the 1914-15 Star, British War Medal (BWM) and Victory Medal (VM). The 1914-15 Star is confirmed in Medal Roll RASC/5B4/3594 with the correct service number but the rank is shown as Sergeant. His entitlement to the BWM and VM are confirmed in Medal Roll Labour Corps Off/225/194 where his rank for both medals is 2nd Lieutenant.

The next entry on his Police Personnel Record dated 20 January, 1920 states: “Appointed to Permanent Force on this date. Service as a Temporary Constable to count as of 8 August, 1914 (Signed) George Bruce, Chief Constable.”

According to his MIC, Andrew Mitchell applied for his medals on 12 September, 1921 when his address was '115 Chalmers Street, Dunfermline, Fife'.

On page 10 of 'A Pictorial History of Fife Constabulary' (Published in 1999 by Fife Constabulary to celebrate the amalgamation of the three previous forces in 1949) is a picture showing the Dunfermline City Police in 1911. The box below shows a direct quote from the booklet:

So far, I have not found his complete police career history but know from the newspaper cutting above that around 1942, Andrew M Mitchell was promoted to Lieutenant and Deputy Chief Constable after John Ritchie Inch became Chief Constable of Dunfermline City Police that year.

I have also confirmed, courtesy of Police Scotland and Fife Council Archives that Superintendent Andrew M Mitchell retired on Pension from Fife Constabulary on 26 March, 1956.

I am grateful to the staff of Fife Council Archives and Police Scotland for their assistance in researching Andrew Mitchell’s police career. 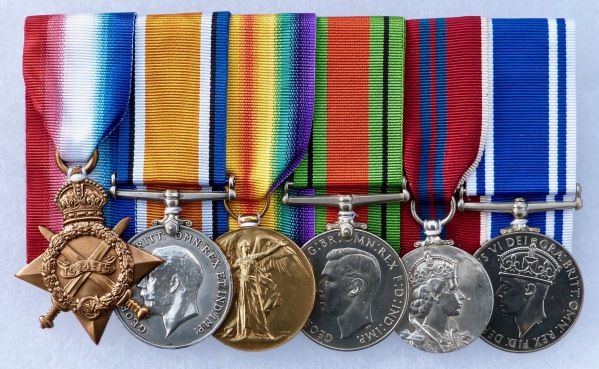 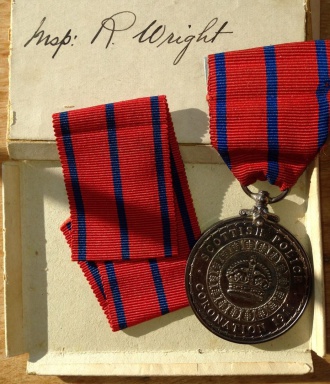 This medal is a bit of a mystery.

I was initially outbid on the medal but then it was withdrawn for sale for “There being an error in the seller’s description.” I contacted the seller to enquire but heard nothing back?

He and Catherine had been married for “33 years”, had 3 children together, all of whom were still alive at the date of the Census.

Robert wright had been born in Aberdour in Fife, his wife in Cowdenbeath in Fife and their daughter in Anstruther in the County of Fife. Given his age and rank, and the fact that Anstruther was a County Station, he is more likely to be a County Police officer rather than Dunfermline Burgh Police. I am happy to correct this entry if further evidence disproves the above.

I have added his name to the Coronation (Scottish Police) Medal, 1911 medal roll as an officer in Fife Constabulary. 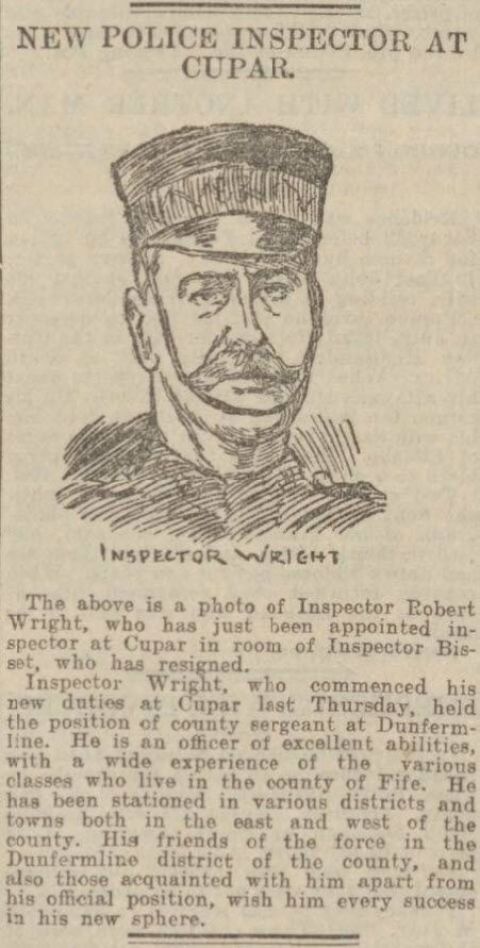 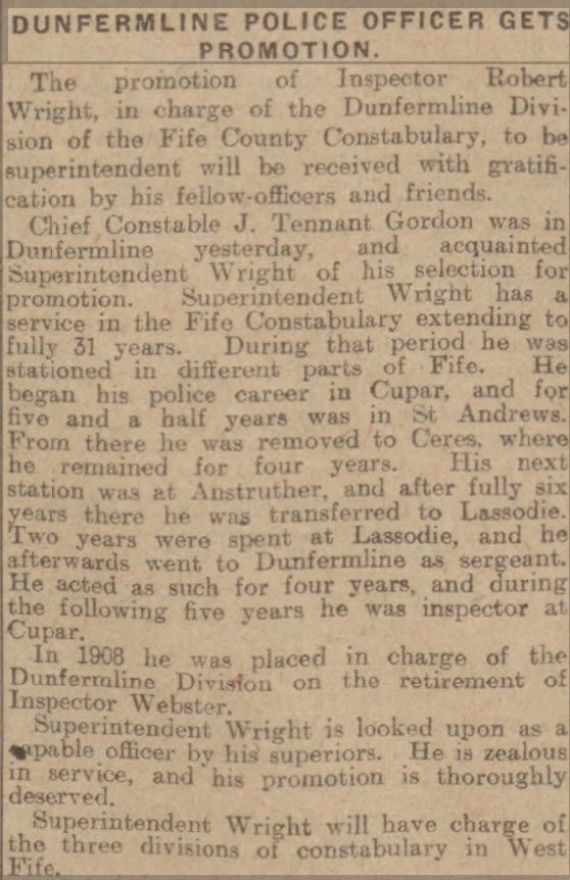 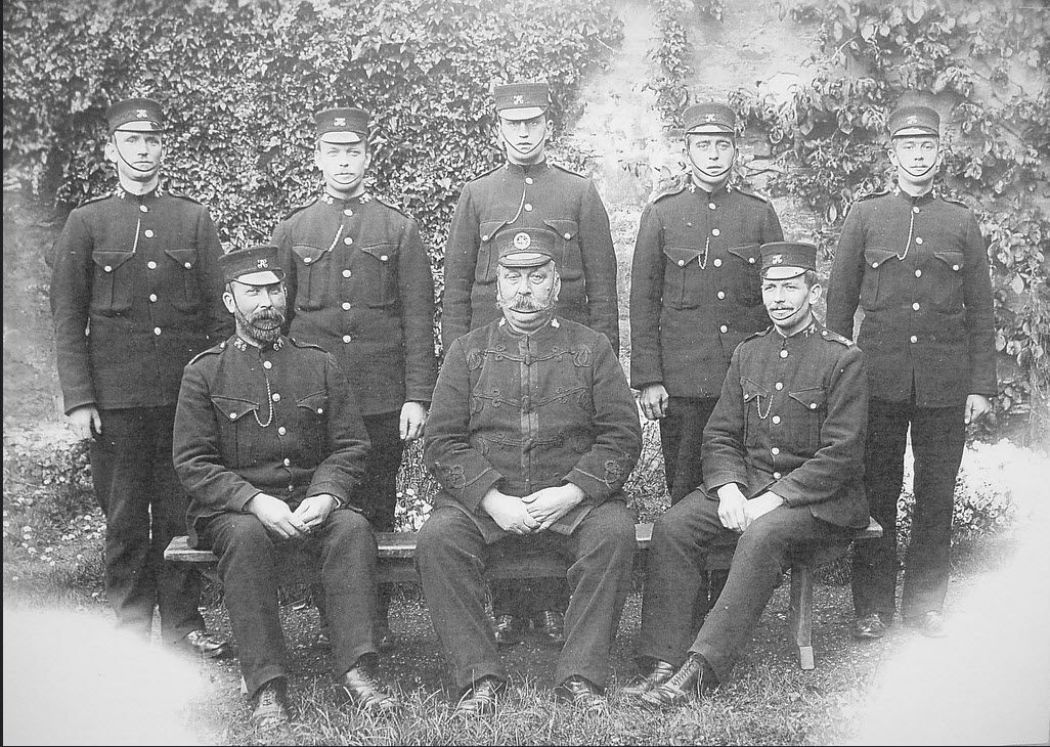 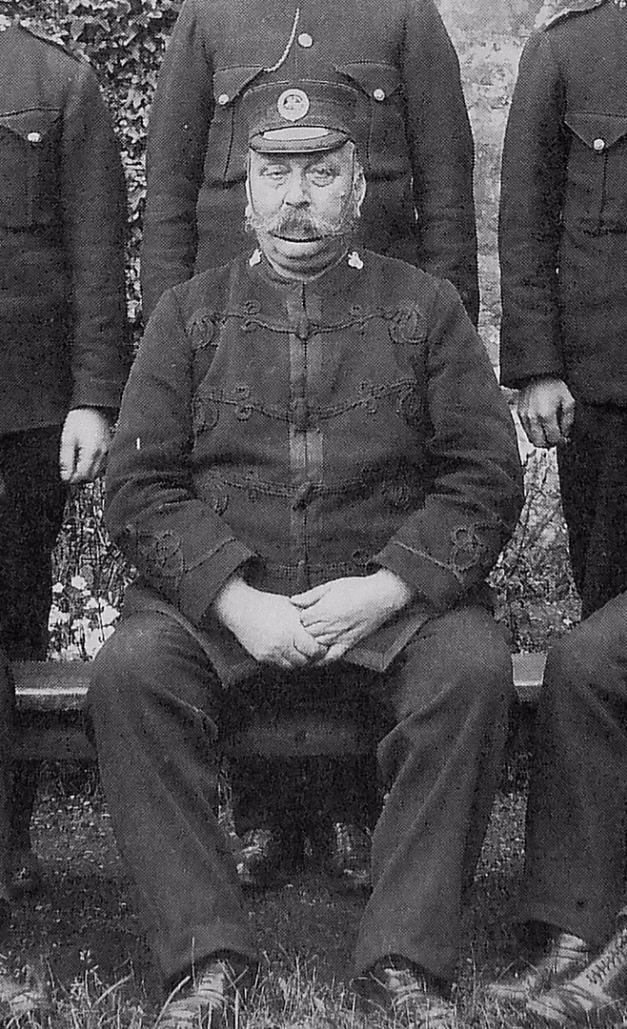 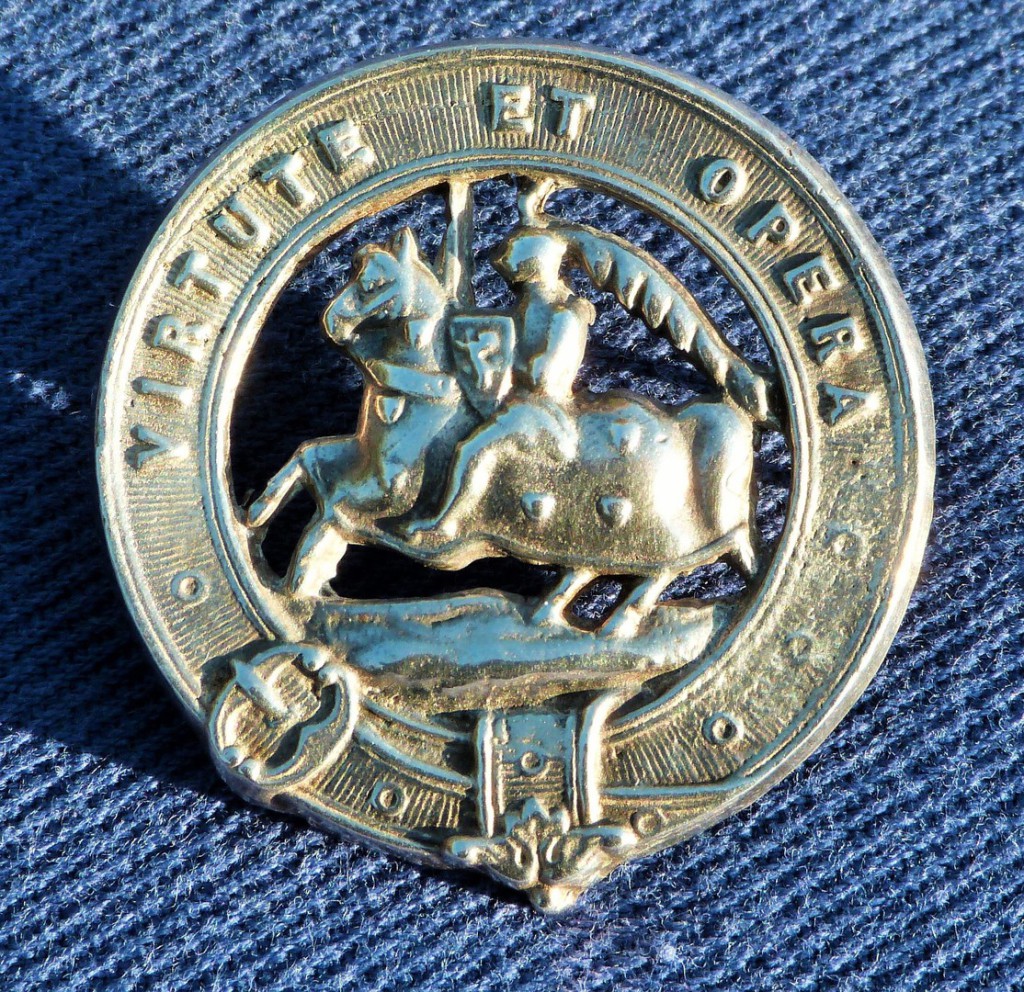 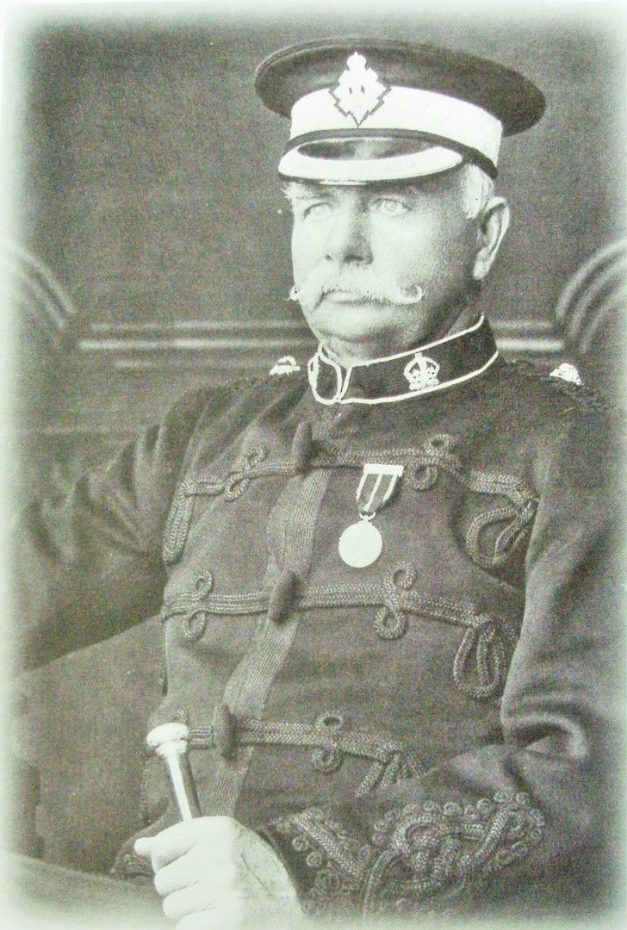 Samuel Wright was born on 28 February 1843 at Roxburgh Mains in the County of Roxburgh.

He joined the County Police of Edinburgh on 20 November 1866. In December that year, he married Margaret Gourlay.

Samuel Wright served as a Constable at Davidsons Mains, in the Parish of Cramond near Edinburgh, Granton, Dalkeith and Gorebridge as well as at Headquarters in the Midlothian County Council Buildings in Parliament Square, Edinburgh.

He died in service as Deputy Chief Constable of Mid Lothian Constabulary on 2 November 1909 in Edinburgh.

The Scotsman newspaper edition of Thursday 4 November 1909 reported the following:

On Monday 8 November 1909, the Scotsman reported the following:

This is Samuel Wright’s only police medal entitlement.

To see a picture of DCC Wright and his Warrant Card, click here. 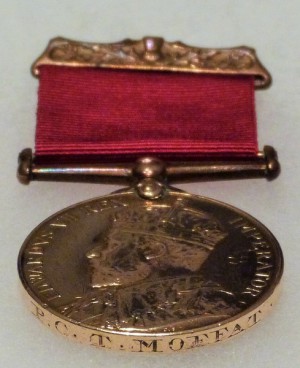 Thomas Moffat was born on 21 October, 1877 at 70 Albert Street in Glasgow. His father was Thomas Moffat, a ‘Journeyman Iron Turner’ and his mother, Ellen Dean or Moffat.

His parents were married on 8 September, 1876 at Glasgow.

PC Thomas was one of the 71 out of 84 Mid Lothian Constabulary officers on duty during the Visit of King Edward VII to the City and County of Edinburgh (Mid Lothian) during May, 1903. An account of the presentation of the medals on 15 March, 1904 can be found in the Police Review and Parade Gossip newspaper edition of 25 March, 1904, page 153.

Between that date and 1907, Thomas Moffat left Mid Lothian Constabulary.

On 6 July, 1908, Thomas Moffat, 30 years and single, an Engineer’s Winch man, died at 54 Garnethill Street in Glasgow after a long illness. His parents were Thomas Moffat, an ‘Engineer’s Tool Maker’ and Ellen Dean or Moffat.

His father registered the death.

This is PC Thomas Moffat’s only medal entitlement from his police service.

To return to Medals for Sale, please click here.