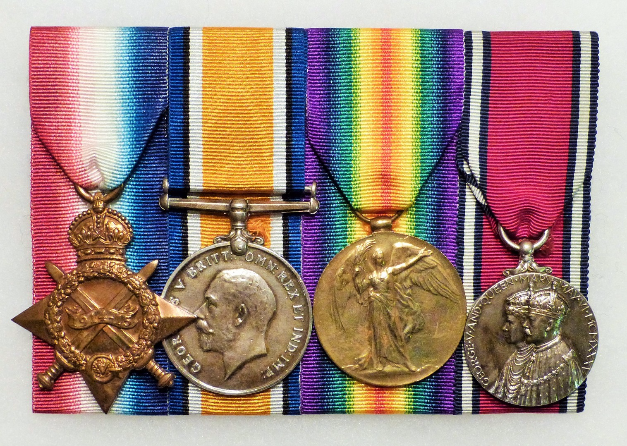 James Smith Milne was born on 25 March, 1891 at 17 Lochlands Road, St Vigeans, Arbroath in the County of Angus. His father was James Milne, a Flax Warehouseman and his mother, Mary Ann Ross or Milne. His parents were married on 31 December, 1884 at Arbroath when his father’s occupation was ‘Journeyman Joiner’ and his mother, a’ Reeler in Flax Mill’.

The family were still living at 17 Lochlands Road in the Census of 1891, James being the youngest of three boys.

In 1901, the family were still at 17 Lochlands Road but James now had a younger brother. His father’s occupation was now ‘Railway Goods Porter’.

James Smith Milne began working for the Dundee and Arbroath Joint Railway in 1907. Their head office was at Dundee Tay Bridge Station, although James worked near Elliot in Angus, a small coastal hamlet on the western outskirts of Arbroath.

In the 1911 Census, the family with Mary Milne as head, were living at 9 Lochlands Road in Arbroath and James Smith Milne was a ‘Signalman – Railway’.

On 23 May, 1913, James Smith Milne applied for appointment as a Constable in Greenock Burgh Police. He completed his application in his own neat handwriting and his description was confirmed at Arbroath Police Station by “Inspector R Pyper’ as 5’10”, dark brown hair with a fresh complexion.”

Inspector Pyper also signed to confirm the veracity of the references James Smith Milne had provided regarding his suitability for the office of constable.

On 9 June, 1913, He was appointed a Constable in Greenock Burgh Police.

At Greenock, on the 9 September, 1914, James Smith Milne, a Police Constable aged 23 years and 150 days, enlisted in the Scots Guards as Guardsman Number 10522.

During training in England, he married Davina Moncur Ramsay on 20 November, 1914.

On 27 December, 1914, James Smith Milne was posted to France with the 1st Battalion Scots Guards as a ‘Replacement’. The Battalion Regimental War Diary (WO 95-1263) records the event in the margin on 31st December, 1914 as follows:

What followed then was a period of intense activity in and around La Bassee fighting the Germans in trenches sometimes no more than 100 feet away, the conditions of which are described in great detail in the War Diary.

James Smith Milne was wounded by shell fire and captured by the Germans on 25 January, 1915. The circumstances are recorded in the Regimental War Diary as shown below:

The next day, the Regiment marched back to Bethune and the total casualties were recorded in the style of the time with only officers names recorded, ‘Rank and File’ being simply recorded as the numbers shown below:

James Smith Milne’s next of kin are recorded on his Army papers as his wife, living at Glenskinno near Dun by Montrose in Angus and his mother, Mary now living at 13 Duke Street, Arbroath.

His Army record confirms that his son, James Ramsay Smith Milne was born at Dun in 1915.

According to his Army record, he was held in a Prisoner of War Camp near Braunschweig in Lower Saxony, Germany in 1916 after his injury had healed in hospital. He was held from 25 January, 1915 until repatriation on 29 December, 1918.

He was finally discharged on 29 March, 1919 when he rejoined Greenock Burgh Police.

His Medal Index Card confirms his first date of entry to the France Theatre of War as 28 December, 1914 and his entitlement to the 1914-15 Star, British War Medal and Victory Medal. These are all recorded in the appropriate Regimental Medal Rolls for the Scots Guards.

Sergeant James Smith Milne was awarded the King George V Silver Jubilee Medal in 1935 and this is also confirmed in the relevant Medal Roll.

The Glasgow Herald newspaper of 16 December, 1936 noted that:

The lives of Prisoners of War in WW1

For an insight into the lives of the millions of prisoners of war from all sides of the conflict, please look at a series of articles produced by and for the British Library at: 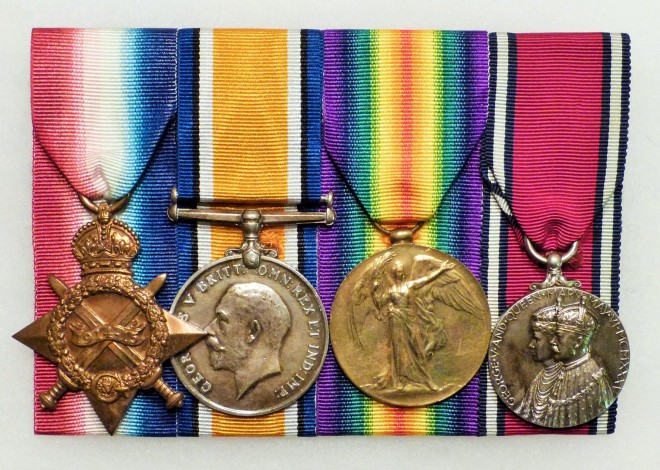 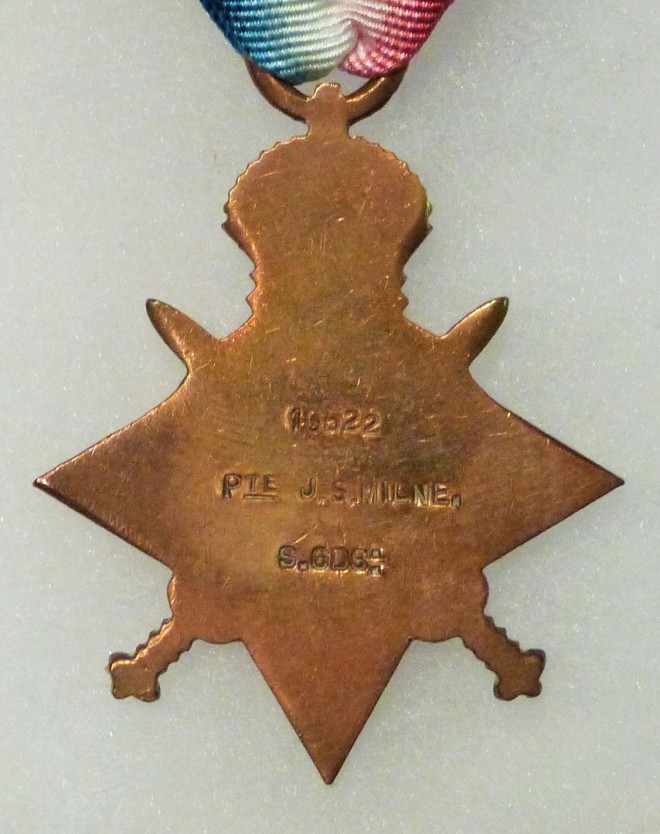