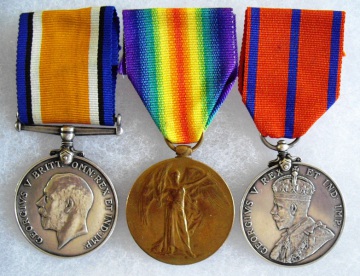 John Cape was born in Silloth, Cumbria in 1883. He joined the City of Glasgow police in February 1908 and was posted to ‘D’ or Southern Division.

According to ‘The Police Review & Parade Gossip’ of 11 October 1912, John Cape was one of the 1465officers in Scotland awarded the King George V Coronation (Scottish Police) Medal 1911 in that year (although he is listed in the paper as ‘John Cope’).

He resigned from the police and joined the 2nd Battalion Scottish Horse on 19 September 1915 as private 6050.

He was posted to Egypt with the Expeditionary Force in March 1916. Like many, he too was temporarily transferred to the Military Mounted Police with the Number P/5846. He then served in the Middle East until June 1919 when he returned home.

His MIC confirms his entitlement to the British War Medal and Victory Medal which are both correctly impressed with his Scottish Horse designation.

He resigned of his own accord in 1929 to start his own business.

I cannot find any record of him dying in Scotland but a John Cape born in 1883 died in Lancashire in December 1958.