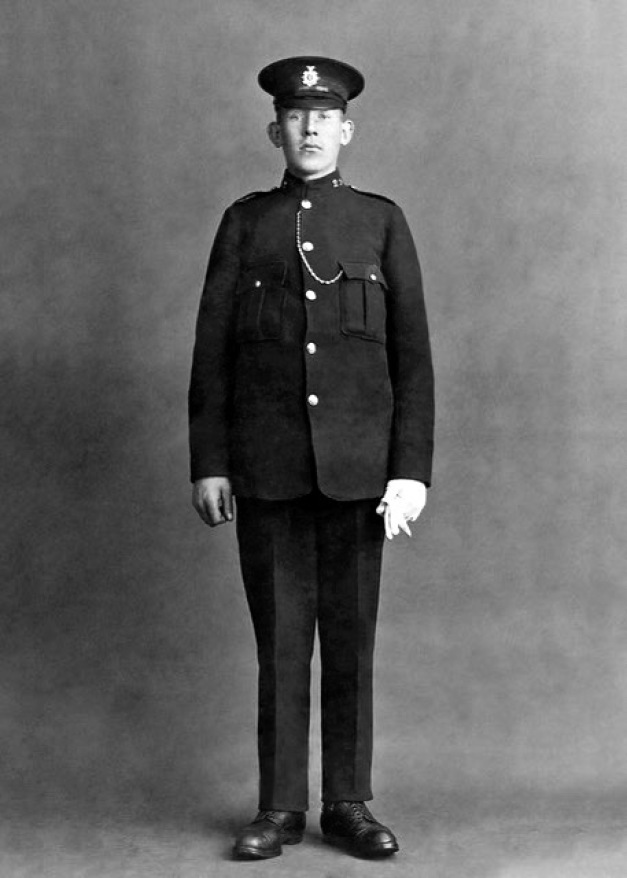 James Shand Craib was born on 13 April 1896 in Burnside of Ayoun, Inveravon, Banffshire. His father was William Craib, then a Railway Surfaceman, and his mother, Mary Shand or Craib. His parents had been married on 1 March 1895 at Inveravon.

On the night of the Census of Scotland, 1901, the following were living at the Cattleman’s House, Ruthven, Inverness-shire.

I believe that William and Mary had a least one other child, a son David.

Going by his age, (18), James joined Kilmarnock Burgh Police in 1914. His previous occupation was a Maltman, so it is likely that he worked in the Distillery at Dalwhinnie where his father also then worked. The family address was Distillery Cottages. He applied to Chief Constable Angus Cameron for consent to join the Army  and this was granted in November 1915. He was single when he joined the police.

James enlisted in 3/4th Royal Scots Fusiliers (RSF), at Kilmarnock as Private No. 9030 on 19 November 1915 (the No. 201130 also appears in his file under the RSF). His service Record is part of ‘The Burnt Records Collection’ which were damaged by enemy bombing in London in 1940.

From 8 August 1916, he was employed as an Assistant Physical Instructor training recruits.

He embarked for France with the 4th Battalion RSF from Folkstone in Kent on 28 March 1918. He disembarked at Boulogne, France on 29 March 1918.

On 30 March 1918, he was transferred as a Sergeant to the 15th (Service) Battalion, the Royal Scots with the new number, 51409. The 15th Battalion was also known as ‘the 1st City of Edinburgh Battalion ‘ or ‘Cranston’s Battalion’ which might account for the discrepancies in his unit listed after 13 April 1918. The Battalion was involved in very heavy fighting for most of that year in France and Flanders.

The 15th Royal Scots served in France  until May 1918 when after suffering very heavy casualties, including James Shand Craib, they were reduced to Cadre strength. The battalion was disbanded in August 1918.

In a letter dated 24 May, 1918, the Chief Constable of Kilmarnock Burgh Police, Angus Cameron, wrote to Mrs Mary Craib expressing his sympathy at her son’s death. He wrote;

It is with deep regret that I have just learned from Constable McDonald, Newtonmore, that your son James was killed in action on the 13th ultimo.

On behalf of the Kilmarnock Police Force, and myself, I take this opportunity of conveying to you our profound sympathy.

As a Constable in this force, your son proved himself most capable and reliable, and his kindly and cheerful disposition made him a very popular officer. I have every confidence in saying that had he been spared; he would have had a most promising Police career. His rapid preferment in the Army demonstrated that he had carried with him to the Military Service all the noble attributes he exhibited here.

In the supreme and gallant sacrifice he has made, fighting for the freedom of his Country, we mourn the loss of a loyal and respected comrade.

The letter can be seen in the picture below.

In a letter dated 22 August 1918, from the Officer in charge Records, No. 2 District to ‘Mr W. Craib, The Distillery, Dalwhinnie’, he returned the effects of ‘the late 51409 Sergeant James S. Craib, 1st (sic) Royal Scots’ to his family.

Mr Craib was asked to acknowledge receipt of the articles which he did on 26 august 1918, and his signature can be seen in the receipt in Sergeant Craib’s Army Records, which although burnt, still exist. They can be found in Ancestry.com under the mis-transcribed name of “James Shard Craib of Distillery, ‘Dulwhinnie’ (sic), ‘Taverners’ (sic) which is presumably Inverness, the county in which Dalwhinnie is situated!

Both of the above documents record that 51409 Sergeant James Shand Craib of the 15th Battalion Royal Scots, was entitled to the award of the British War Medal and Victory Medal for his service during World War 1. It is likely that his mother and father were sent the medals . 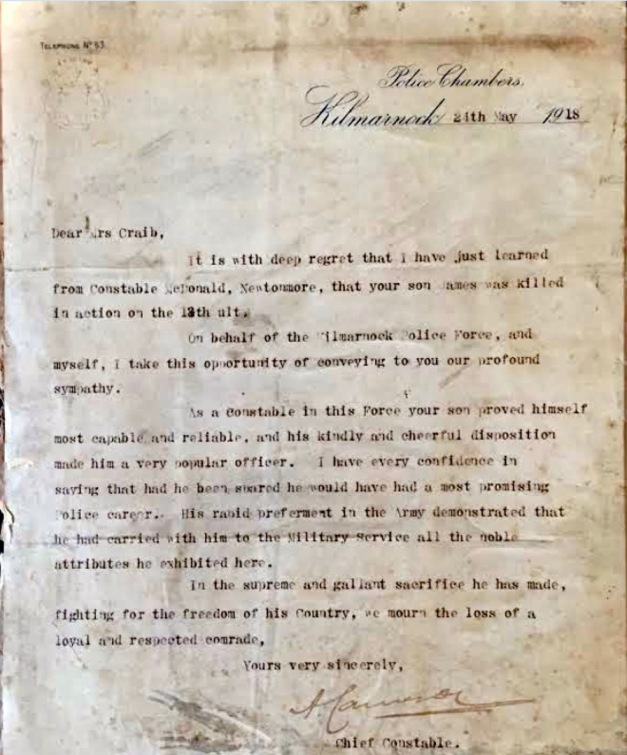 Letter from Chief Constable Angus Cameron of Kilmarnock Burgh Police, dated 24 May 1918, expresseing sympathy to Mrs Craib on the death of her son, James. 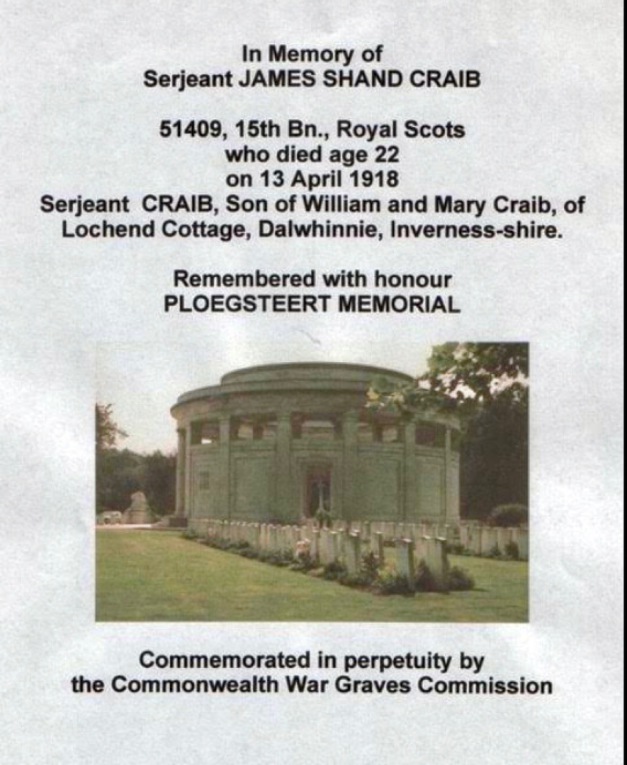 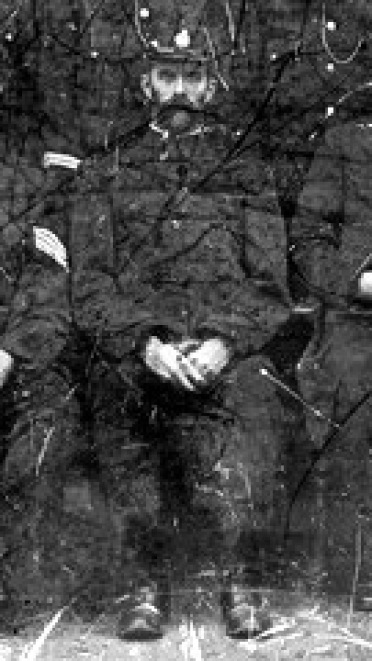