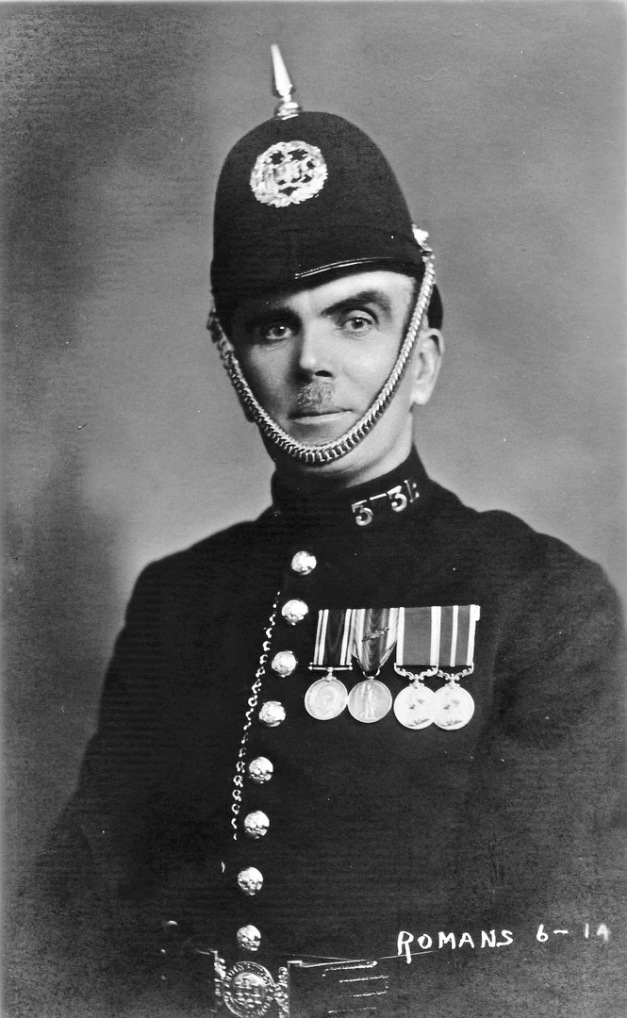 William Richard Tregunna was born in Snettisham near King’s Lynn, Norfolk on 21 September 1886. His parents were John and Harriet Tregunna of Snettisham, Norfolk. His father was a ‘Beer-house Keeper’. He was also a 'Naval Pensioner'.

William had been a Footman for A. W. Sandford of Cork, Ireland when he enlisted in the Prince of Wales Own Norfolk Royal Garrison Artillery (RGA) on 24 February 1905. His number was 3322, although later documents show the numbers 1402448 and 22579 also recorded in his Army records. He was 18 years and 8 months old, 5’ 11”, pale complexion, grey eyes and black hair.

Among the names recorded in the Census taken in 1911 for No. 60 Company, Royal Garrison Artillery in India, (possibly in Quetta in what is now Pakistan), was Acting Bombardier William Tregunna, (24), a Clerk, born in Snettisham, Norfolk.

“Sixty-nine NCO’s and men were despatched to advanced Base for transfer to French front. The great majority of these NCO’s and men were pre-war men and had been out East from 6 to 12 years and the remainder were new army men and these were all surplus as at this time the Battery had 61 men on leave in India (a mixture of pre-war & new army men).

It is possible that William Tregunna was transferred in the above group, but I have seen no documentation to suggest he served in France. There is no mention of France on his Medal Index Card (MIC). He was awarded the Army Meritorious Service Medal on 22 September 1919, probably whilst still serving in Mesopotamia (modern Iraq). He was also awarded the British War Medal and the Victory Medal for his war service.

He was awarded his Army Long Service and Good Conduct Medal in November 1923. All of the medals can be seen in the picture above.

Given his address, it is possible that William was stationed at the Royal Garrison Artillery Fort in Leith (Leith RGA Fort can be seen in the top left of the map below).

Dora was born in Eccles, Lancashire.  Her siblings were born in various places like Newcastle-upon-Tyne, Liverpool and Eccles.  This was because their father was an engineer who moved for commissions.  He was a Hull man and in retirement, took the family back to Hull.

Dora's grandfather was a very prominent Hull resident - Captain James Wood, who captained the first steamship out of Hull.  He is buried in the south transept of Hull Minster.

William Richard Tregunna was ‘Discharged on termination of his engagement  on 25 May 1927.

[1]Sammara is a city in Iraq standing on the east bank of the River Tigris about 78 miles north of Baghdad. ‘M.E.F.’ = Middle East Force. 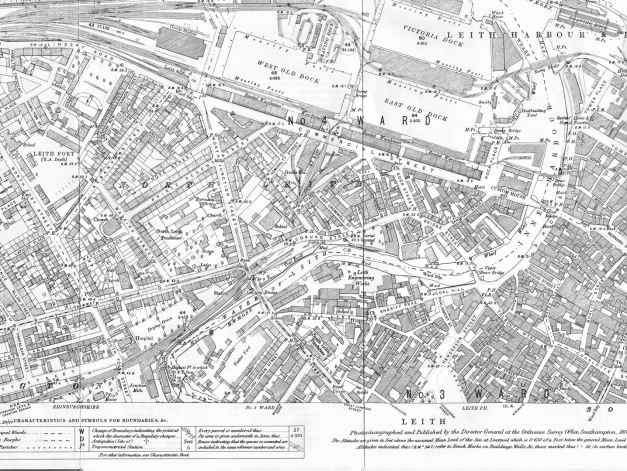 William Tregunna joined Edinburgh City Police on 24 May 1927. He was appointed a Constable in B Division, Gayfield Square Police Station, with the collar number 373B. His description was 40 years of age, 6’ tall, brown hair, grey eyes and a fresh complexion. His former occupation was ‘Army Sergeant Instructor’.

Under ‘Medals & Decorations’ on his Edinburgh Police record, his medals are listed as “Military Medal, General Service Medal (BWM), Victory Medal and Long Service & G. C Medal (Army)”. I believe his Meritorious Service Medal  has been mistaken for, or incorrectly noted, as ‘Military Medal’. His Army record clearly states the dates and awards as shown in paragraphs 4 and 5.

William Tregunna and Mrs Dorothy Tregunna are listed living at 20 Broughton Road, and at Elm Row, just off Leith Walk.These addresses are within B Division.

On 18 December 1945, in the Edinburgh City Police Weekly Record, he was Commended for “Alertness and devotion to duty displayed in the arrest of a man for housebreaking.” (Burglary). He was also awarded five ‘War Service’ chevrons for his service during World War 2. He would also have been eligible for the Defence Medal although it is not mentioned on his personnel record. He could also have applied for it after his retirement in 1946?

In the late 1930s - 1940s, William and Dorothy were living at 78 Montgomery Street, just off Leith Walk and still in B Division.

The Edinburgh Evening News of 24 February 1934 has in its Classified Section an advertisement for the Star Mission, 7 Roxburgh Place, Edinburgh and one of its preachers is William Tregunna.

The Edinburgh Evening News of Monday 27 March 1939 in a report on the ‘Close of Session Meetings’ of the Sunday Fellowship in the Lothians mentions that in the Musselburgh Meeting:

“Constable James Bold, of the Royal Irish Constabulary, who was accompanied by PC William Tregunna, Edinburgh, gave the address, and Miss Jean Sharp was the soloist. Mr Tregunna also contributed to the musical programme.”

His life after Edinburgh City Police

The following is a quote from a family email kindly sent to me by Peter Holford.

“You mention her [Susie's] daughter Dora who married Will Tregunna.  We knew them quite well and in fact I spent a week with them in their Edinburgh flat when I was about 15 years old, 78 Montgomery Street.  They were a delightful couple – he was in the Indian Army then joined the Edinburgh police when he retired.  After that he became a Baptist pastor in the Orkneys, on Eday, and they talked of how Aunt Dora used to be wrapped in a tarpaulin and lay in the bottom of the boat for the crossing from Kirkwall.  He was large, with a big voice and very religious…she was also religious but charming and warm, loved big hats and beads and could be delightfully vague.  They had some great friends in Edinburgh and during the war had open house for anyone who needed a bed.  Oddly, his funeral was probably the happiest I’ve ever attended.”

Bill and Dora had no children. They were very active members of the Baptist Fellowship. William Tregunna died in Edinburgh aged 84 in 1970. His death was registered in the George Square district. Dora came from a very long-lived family. She died at 100 years old. Her mother, Susie, lived to 90.

My thanks to Ray Ricketts for sending me this photograph which I was able to identify by the collar number. The tunic buttons in the picture are the ‘Semper Vigilo’ type introduced along with the ‘national cap badge’ after 1932 so this may have been the last time PC Tregunna ever wore the ceremonial uniform. My thanks also to Peter Holford for the later picture of William and Dora and for the personal family details that filled in the gaps. As ever, Edinburgh City Archives were very kindly able to provide me with William Tregunna’s Edinburgh City Police history. 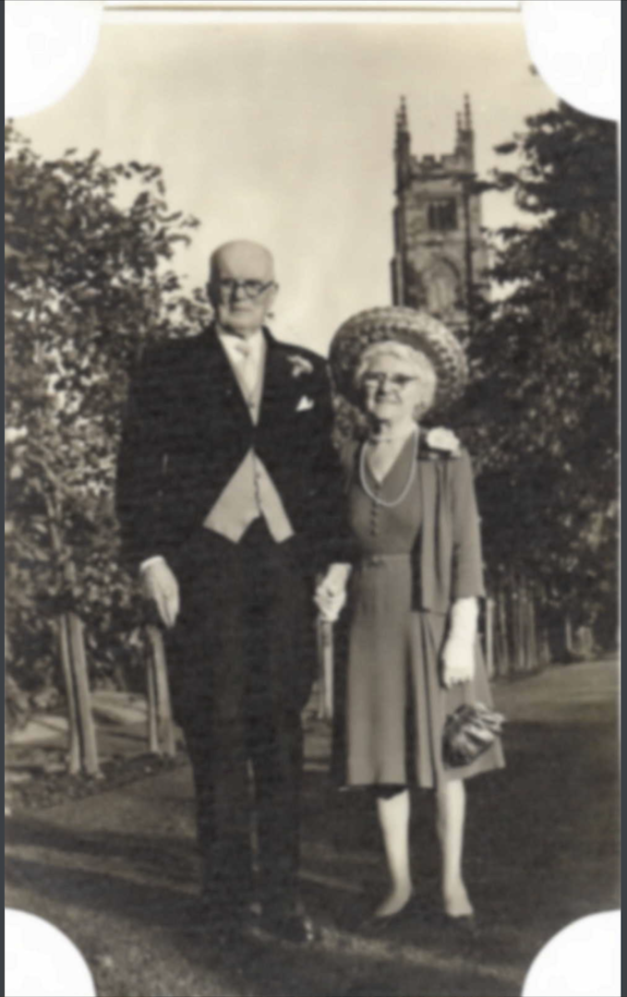 William and Dora (Dorothy) Tregunna at a wedding between 1946 and 1970. Picture courtesy of Peter Holford, a relative of the couple.