I am grateful and indebted to George Barnsley of Lanarkshire Police Historical Society for the images and text below.

They can be contacted on the following Link. www.lphs.org.uk

You can also view other Motherwell & Wish Burgh Police officers by clicking on the following links to the Lanarkshire Police Historical Society website: 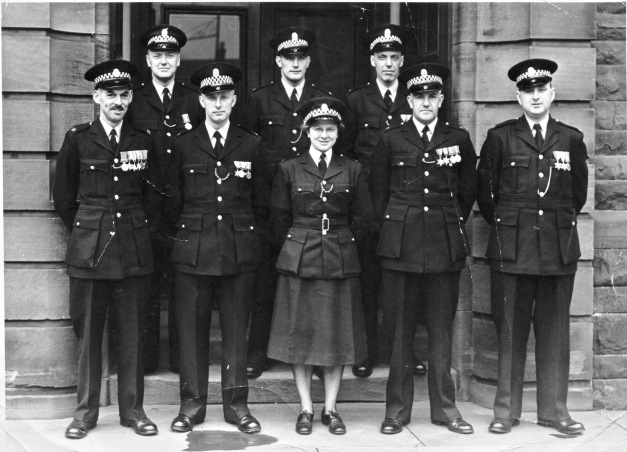 Motherwell & Wishaw Burgh Police contingent attending the Coronation of Queen Elizabeth II in 1953. (Picture courtesy of George Barnsley and Lanarkshire Police Historical Society).
The officers are  from Motherwell and Wishaw Burgh Police departing for the Coronation in 1953.
The officer front left is PC Thomas Armstrong (Retired as an Inpector). He was a Major in the Border Regt during WW2 and was involved in Op Market Garden at Arnhem. He was captured by the Germans. A short passage on his military career is shown below.
Next to Thomas  Armstrong is James Ramage (Retired as a Chief Inspector
Second in from the right is Murdo Mackay (Retired as Ch.Supt). He was in the RAF. Again, short biography below.

Born in the Parish of Langholm or Staplegorton, Dumfries in 1916.

Served in Merchant Navy in 1930s’s and after completing his apprenticeship, joined the Scots Guards and later, Motherwell & Wishaw Burgh Police.

Was commissioned as an officer in the Border Regiment in 1940.

In September 1944, whilst commanding B Company, 1st Battalion Border Regiment near Arnhem in Holland, was wounded and captured.

From then until April 1945, was POW No. 91199 in German captivity at Oflag 79 near Braunschweig, Niedersachsen.

After the war, rose to rank of Chief Inspector in Motherwell & Wishaw Police before retiring and becoming head of security for the British Steel Corporation at the Ravenscraig Steel Works in Motherwell.

Murdo was born in the hamlet of Tubeg near the village of Skerray in the county of Sutherland in 1914 and was educated at the local village school until leaving at the age of 14.

The only work that was available to him was working on small fishing boats but seeing no future for himself in that line of work he decided to leave home to find alternative employment. There weren't many job opportunities available to him, but he found work in various hotels in the north of Scotland as a "Buttons".

He applied to Edinburgh City Police when he was 21, but they weren't recruiting at that time. He then trained as a Psychiatric Nurse in the Royal Edinburgh Hospital gaining his certificate three years later.

In 1938 he applied again to Edinburgh Police but was unsuccessful. He then applied for Motherwell & Wishaw and was delighted when he was accepted, so Edinburgh's loss became Motherwell and Wishaw’s gain. He was given accommodation in the Police Barracks on High Road and that was to be his home for several years.

In 1941 the call came for more volunteers to join the war effort so he along with 5 other constables enlisted, he volunteered for the RAF and was accepted. With the risk of Luftwaffe attacks on training bases in Great Britain, training bases were set up in Canada and the U.S and he was sent to Air Navigation School in Canada.

On finishing his training, he was then posted to bomber command as a member of the crew of Stirling bombers based in Mildenhall with No 15 Squadron.

He took part in 28 important operational sorties over Germany but was shot down over Frankfurt on his 29thmission, his life being saved by his parachute, but unfortunately, he was captured and spent the remainder of the war in P.O.W camps in various parts of Germany, at one time being incarcerated in Stalag Luft 111, the camp depicted in the film the Great Escape, before being transferred to another P.O.W camp near Dresden and was liberated by the Russians a few days before the war ended de-mobilised in April 1946 with the rank of Warrant Officer Class I.

After a period of rest, he then returned to the police and shortly after his return went into the traffic department, and to quote a fellow office of the time, he became a "Kenspeckle" figure of the burgh.

In 1967 he was promoted to Chief inspector being stationed in Wishaw, he was there for two years until the amalgamation of forces to Lanarkshire Constabulary, he was then again back in traffic being promoted to Superintendent, when he took control of the Central Division, being based in Beckford Street in Hamilton.

He also had a rather varied remit that also included control of the dog handler section, and underwater search unit. He also volunteered to take over the job as manager of the pipe band and it was generally accepted that but for his keen interest, the band certainly would not have attained the standard that it had done as they travelled the length and breadth of the country and was overjoyed when they won the competitions that they had entered.

It was with much reluctance that he had to leave the force after 36 years' service, stating that if he had to live his life over again, he wouldn't have changed a thing. 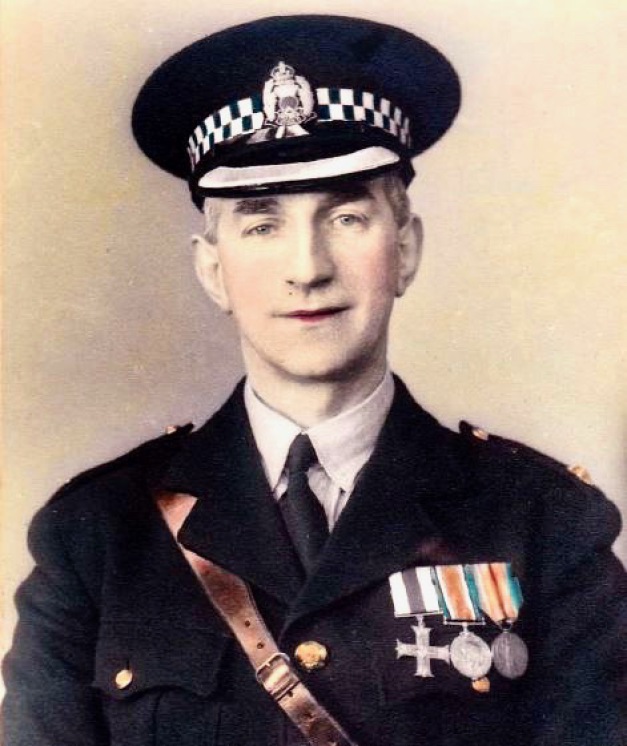 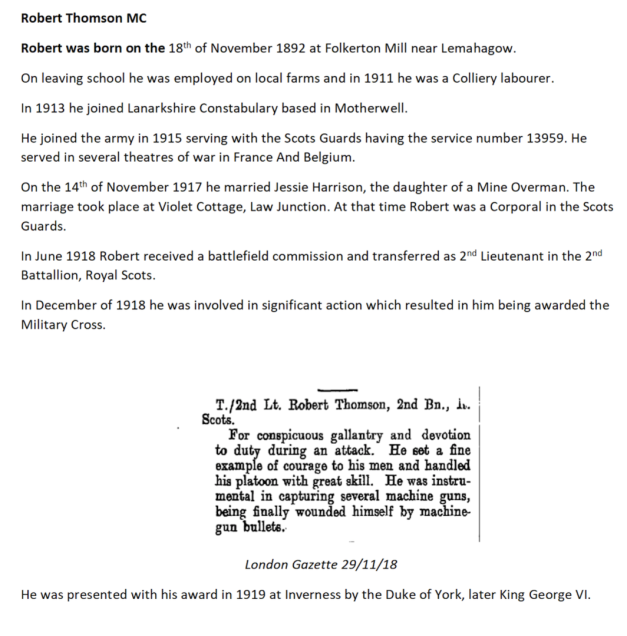 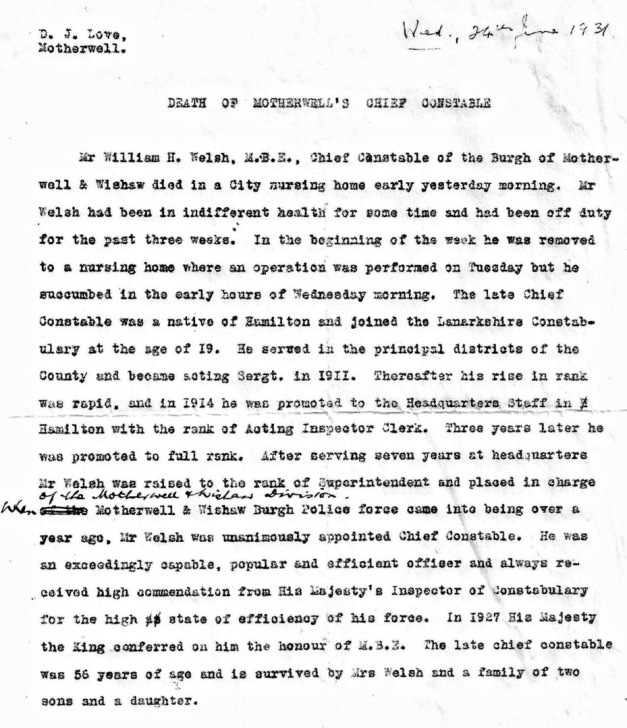 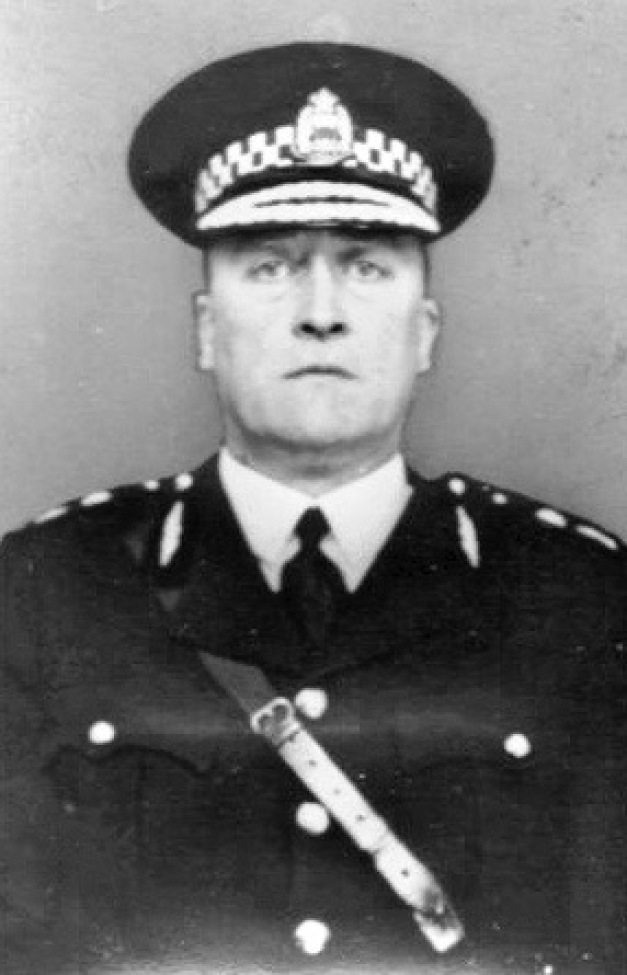 John Murray was born on 31st January 1900 in the village of Tomintoul in Banffshire. He was the second son of Alexander Murray, a gamekeeper on the local estate, and his wife Isabella Jane, a gamekeeper's daughter from Laggan.

His father's roots were in Sutherland and it was to there that the family moved in 1913, where his father  became gamekeeper of an estate in Brora which was let by the McCorquodale family. They later took over the Crask Inn and croft near Lairg.

John Murray in a chemist in Brora before being called up in 1918. The war was to end before John Murray's training and he never saw active duty in WW1. He did, however, serve in Ireland.

In 1920, John joined his younger brother Alexander in Lanarkshire Constabulary, a Detective Constable in Blantyre. In 1930, when the Burgh of Motherwell and Wishaw Constabulary was formed, he moved over to the force as a Sergeant. He had married Mary Russell in 1926 and had a daughter Elizabeth (Betty), who was followed in 1931 by a son Alexander (Alistair).

The post of Inspector in Wishaw was created with the threat of war, and John Murray was promoted and moved to Wishaw in 1938/39. He was then moved back to Motherwell and was promoted to Chief Constable on the death of Chief Constable Lamont in 1942. He remained in post until his retirement in 1965.

He was awarded the OBE in June 1950 and the King's Police and Fire Services Medal for Distinguished Service in 1953.

For the majority of that time they lived in Manse Road in Motherwell and then in Emily Drive. He has a street named after him near the Dalziel estate in Motherwell, where he often walked his dogs, John Murray Court.

On a personal level, as the son of a gamekeeper, he thoroughly enjoyed field sports and he also enjoyed bowling. He was a sociable man and made frequent trips back up to Sutherland, visiting family and friends. He also doted on his grandchildren. He supported Motherwell FC.

Unfortunately, John's retirement was marred by ill health and he died in 1974. His wife Mary passed away in 1982.

His daughter, Betty, became a social worker in Lanarkshire and moved to Sutherland on her retirement. His son, Alistair, joined Lanarkshire Constabulary in 1951 and served in the traffic department, Bellshill, Larkhall and finally Lanark, where he ended his career as Inspector in 1984.

It was in Lanarkshire Constabulary that his son Alistair met his wife, Pamela, who was a serving policewoman in Baillieston until her marriage.

And of his siblings? The eldest, Donald, became gamekeeper to the Duke of Sutherland in Tongue, Hugh became a shepherd and crofter, Agnes became a school teacher and crofter, Meg became a nurse and crofter, Etta died in early childhood.

The youngest sister, Bertha, married and moved to the Borders. At the time of writing (2013), she is approaching her 100th birthday.

John Murray's remains are interred in the family grave in Brora cemetery in Sutherland. 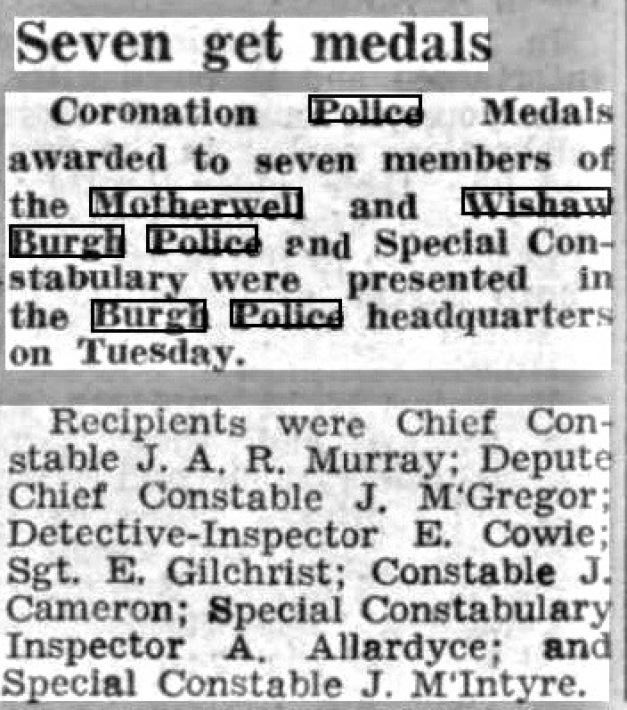 Award of Coronation Medals to members of the Motherwell & Wishaw Burgh Police in 1953.

Award of theOBE To Chief Constable John A. R. Murray in 1950. 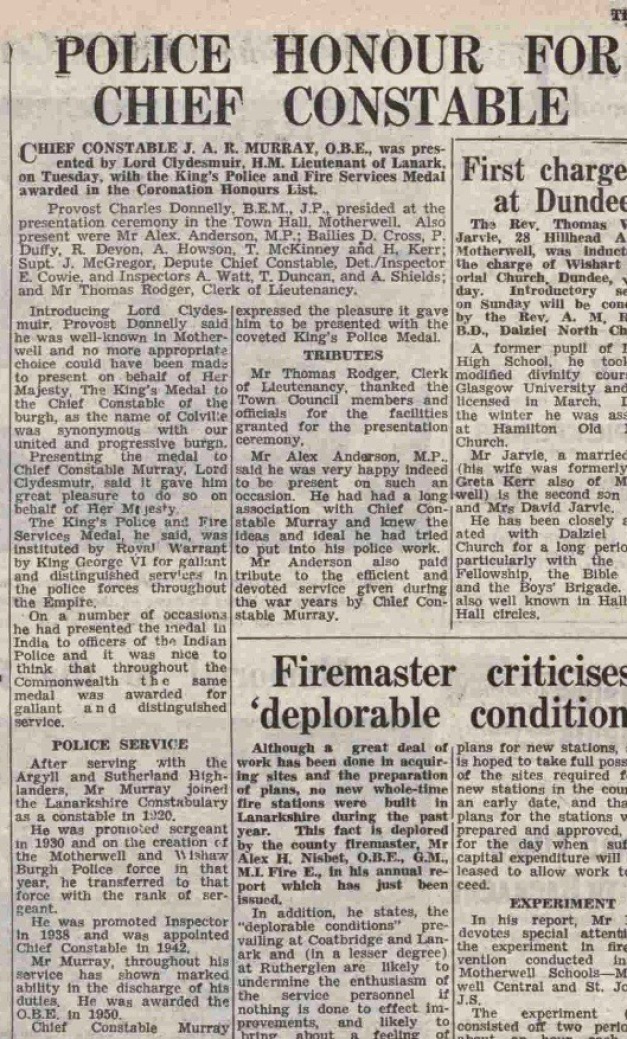 Report of the award of the King's Police Medal for Chief Constable John A. R. Murray in 1953. 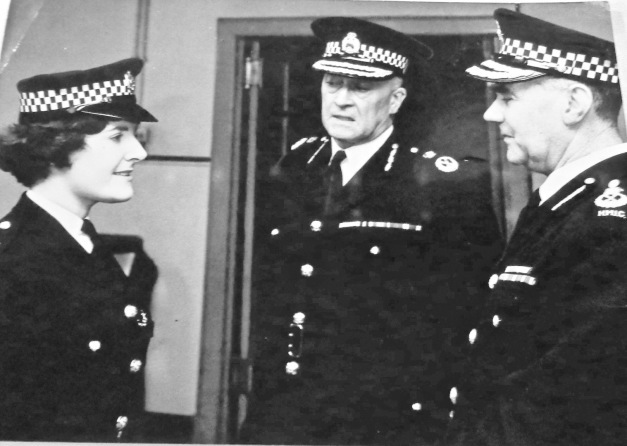 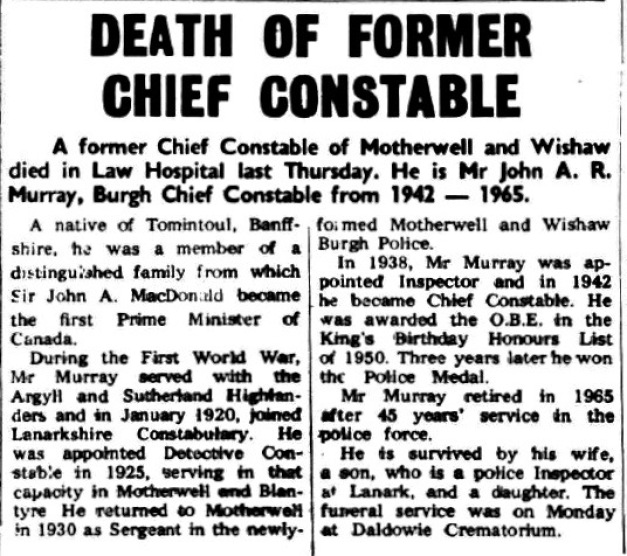